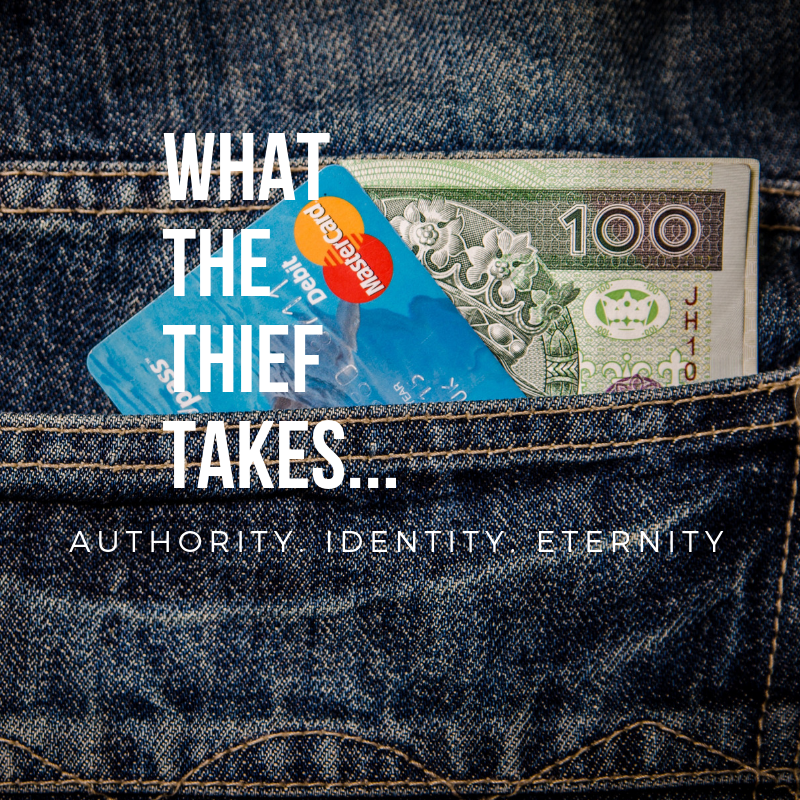 All it took was the right question to rob mankind of everything. Authority, identity, eternity, gone in one carefully crafted sentence from the serpent. That was all that was needed to make Adam and Eve believe the devil was on their side. He wanted them to think he was actually giving them something that would benefit, rather than stripping off everything God gave them until they felt so naked that they hid.

Firstly, the thief takes your authority. 1 Peter 5:8 says that, ‘he prowls around seeking whom he may devour.’ Just like a pick-pocket, he’s waiting for the right moment for you to be distracted by your wrong thought patterns and wrong actions. Ransacking your spiritual life until he’s robbed you blind.

Stay alert dear friend. Satan can only highjack your authority if you give him a foothold. Don’t give him an invitation to take what isn’t his.

Second, the thief takes your identity. Speak up and let that sneaky snake know who and Who’s you are. You are a child of God. End of story. The only conversations you need to engage in with Satan are when he starts his sentence to you with, ‘If you are…’ Remember in Matthew chapter 4, when Satan tempted Jesus into worshipping him? He started the conversation with Jesus exactly the same way.

Third, the thief takes your eternity. This is probably the worse of all his crimes. The forces of darkness have made sure that people are deceived into thinking that all roads lead to Heaven.

Jesus says in John 14:6 that, ‘I am the Way the Truth and the Life. No-one comes to the Father except through Me.’ Pretty straight forward. But sadly, the craftiness of the serpent has led people into thinking that you just need to be ‘good’ to make it to the pearly gates.

The trouble with that is everyone’s ‘good’ is different. Salvation was and is never about being the best person ever. It was a search and rescue mission.

Jesus died because of what happened on that fateful day in Eden. He made a way for you and me to get back into paradise with our authority, identity and eternity in tact.

Don’t let the enemy commit anymore burglary in your mind, body and spirit.

Amplify your voice. Let that condemning conman know that you have awakened and you’re dangerous!