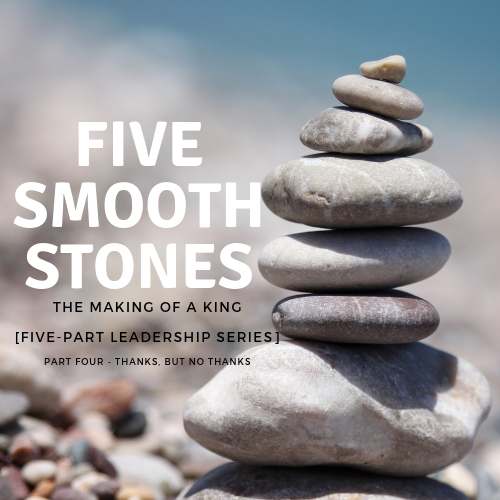 Week Four – Thanks, but no thanks

After you have addressed, affirmed and acknowledged the fact that you’re a leader, you’ll have moments where well-meaning people will want you to “help” you. This can be choppy waters when you’re finding your feet as a leader. But, this is where you will need to learn to say, “Thanks, but no thanks” as politely as possible and trust God.

THANKS, BUT NO THANKS.

Navigating your way through the minefield of wanting to emerge as a leader who listens to advise, but at the same time stands bold in their convictions can be tricky. Saying, “thanks, but no thanks” to “helpful” people can either make or break you. What you’ve got to determine is this; Is the person’s advise testing your character or are they wielding their power towards you? And, is the suggestion they’ve made for your benefit or for theirs?

News of David’s valiant words had reached the attention of King Saul. Finally, after weeks of Goliath taunting and mocking his army, Saul had a willing victim – er, I mean warrior to fight the giant. But when he saw David was just a boy he said, “Don’t be ridiculous – you can’t fight the Philistine. You’re only a youth, and he has been a warrior since his childhood. You lack age and experience. 1 Samuel 17:33

Ouch, that’s gonna sting. Sometimes other leaders can make you feel unqualified for the task.

After David convinced King Saul that he, with God’s help, could truly kill Goliath. Saul told David, “Go then, and may the Eternal One be with you!” 1 Samuel 17:37. Before David was sent onto the battlefield, Saul made sure David was fitted with his own armour. Now, this may seem like a high honour, a true privilege. What a nice, generous king he was. On the surface yes, he did seem as though he was “helping” David.

But was he really helping David or himself? Surely the king was looking after David’s best interests, right? If David did fight Goliath with the strength of God and defeat him, wouldn’t the photo shoot afterwards look better if David were wearing the king’s armour instead of his shepherd’s outfit? Saul could just see the headlines, BOY FIGHTS GIANT IN KING’S ARMOUR or LONG LIVE KING SAUL! His power as Israel’s leader would become stuff of legends.

Of course, the Bible doesn’t go into detail about Saul’s motive, in-fact there’s no mention of Saul’s reasoning for lending his armour to the shepherd boy David. But with a little investigating you can understand what type of character king Saul was.

THE MAKING OF A NEW KING

Fast forward in the story to 1 Samuel 18:7. When David returned from killing Goliath.(Sorry, spoilers!!) The Bible says that the women came out singing, “Saul has slain his thousands, and David, his tens of thousands.” Saul was furious. How dare they put David higher than the king! And from that moment on, Saul’s anger slowly rose because of David’s leadership and anointing.

We need to be so careful as leaders that it’s God who gets all the glory. He looks for character and not power. God knows that power corrupts and introduces pride, (the undoing of king Saul). Even though David did try on Saul’s armour, (maybe out of respect for his king), he decided to go with what worked for him.

I’m not saying you shouldn’t let others help you, what I am saying is figure out what their motive is before you decide to take their advise. Do they want you wearing their “helping armour” for their own glory or God’s?

David’s fourth smooth stone was to remind him that when he did defeat the giant Goliath with his slingshot and smooth stone, God was going to get all the glory and nobody else.

Wear another leaders armour that restricting and ill-fitting?  Hmmmm, thanks, but no thanks!