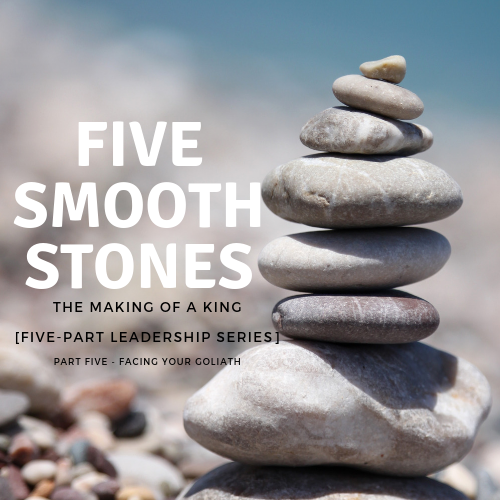 Congratulations, you’ve made it to the final smooth stone!

Over the past four weeks we have stood with David collecting five smooth stones to defeat Goliath. Each stone is a reminder of what true leadership is all about, and for David they were the making of a king.

Whatever your giant looks like, know that you need to confront it else nothing will ever change. This is where you have to put the last smooth stone in your slingshot ready to fight the beast and say, “If you don’t pull through for me God, I don’t know what I’ll do!”

Facing your Goliath is not going to be a walk in the park. This giant has had his way for a while in your life, maybe even years. It’s not going to take too kindly to you pulling the slingshot back and firing that smooth stone into its forehead to take it down.

SO YOU THINK YOU’RE A LEADER?

I have to confess, I’ve had to face my own Goliath just last week. It has reared its ugly head yet again as I take the next step into my calling as a leader. My Goliath has a name and it’s called, self-sabotage. (Check out next week’s post all about it)

It’s no accident that the enemy comes onto the battlefield and takes a swing at you with his sword, spear and a javelin while you’re collecting your smooth stones to defeat him. He’ll wound you so badly with his lies and accusations that you won’t have any energy or drive left to pull back that slingshot and fire the fifth smooth stone.

YOUR GIFT IS WHAT THE ENEMY WANTS

Once you start using your leadership gift, the enemy will try and intimidate you. Why? Because the freedom to exercise your gift is what your enemy wants.

So instead of letting that big, ugly brute send you crying home to your momma, you have to learn how to fight. You have to show him who you are and Who’s you are.

“You come to me carrying a sword and spear and javelin as your weapons, but I come armed with the name of the Eternal One, the Commander of heavenly armies, the True God of the armies of Israel, the One you have insulted.” 1 Samuel 17:45

When we’re in the thick of the battle with our Goliath our first instinct is to run. We’ve felt the sting of the insults that have been hurled our way, and now all we want to do is curl up in a ball and rock back and forth holding our comfort blanket, telling God that, “It’s not fair!”

REMIND YOURSELF HOW GOD HELPED YOU WITH OTHER BATTLES

David needed to remember what each smooth stone represented because this is the juicy part of the story. This bit is where we see the making of a king. As David turned around to face his Goliath, he may have looked at those five smooth stones in his hand and said out loud what each one represented.

STONE ONE: “I am anointed by God as a leader.”

STONE TWO: “God helped me fight the lion and the bear, so He will help me now.”

STONE THREE:”Sandwiches were just God’s way to position me to the right place.”

STONE FOUR:“Saul’s armour was a test to see if I would rely on God completely.”

When the Philistine stood up and approached, David ran toward the line of the battle to meet him. As quick as a flash, he reached into his bag, put a stone in his sling, and launched it at the Philistine, hitting him in the head. The stone sank deeply into his forehead, and the Philistine fell face-first onto the ground. 1 Samuel 17:48

To create the change we need, we have to engage with Goliath and embrace the fight. Leaders go first and help others see that there is a way. David had to show King Saul, his army and his older brothers that people who know their God will carry out great exploits, Daniel:11:32

So, as a leader when you face your Goliath, remember the five smooth stones and know that your next move with God could be the making of a king.