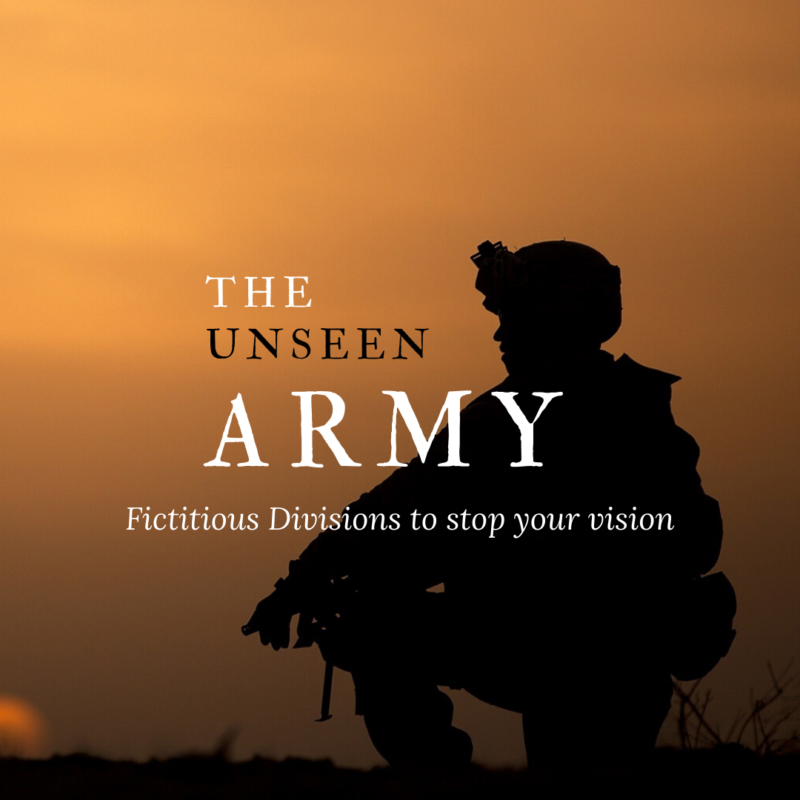 Did you know that your most valuable possession is your vision? I don’t mean the ability of sight, I mean the ability to see into a future God has for you. If you lose your focus on where you’re heading, you’ll start to get discouraged and discouragement blinds because your enemy will create fictitious divisions in a fake army that can stop your vision in its tracks – if you let him.

Between the years of 1943 and 1944, the United States Army created a fictitious army named, FUSAG. This unseen army was part of an operation to hoodwink the German forces into believing that this was a real allied invasion just before the D-Day landings. To make this smokescreen plausible, they brought in British movie industry pros to “dress the set” which consisted of inflatable tanks and landing crafts made of wood and fabric that floated on oil drums. The double-cross deception worked and blindsided the Germans completely.

Satan knows how valuable your vision is; even if you don’t. To accomplish his devious deceptions, he will “dress the set” creating an unseen, fictitious army that will try to stop your vision for good. Divide and conquer is his favourite ruse and he has used it successfully to cause divisions within the body of Christ.

But, my dear friend, do not get discouraged because there are secret agents working in your favour! 2 Kings 6:16-17 reminds us that there are more in Heaven’s unseen army than Satan fabricated, fictitious horde.

‘So he answered, “Do not fear, for those who are with us are more than those who are with them.” And Elisha prayed, and said, “Lord, I pray open his eyes that he may see.” Then the Lord opened the eyes of the young man, and he saw. And behold, the mountain was full of horses and chariots of fire all around Elisha.’

No matter how many fake tanks, landing crafts or phantom forces Satan sends your way, he is no match for God’s unseen angel army. Yes, he has an army of fallen angels but they are outnumbered by God’s mighty army. Satan is known as the father of lies and there is no truth in him (John 8:44) and he will make you believe that he’s got you beat. He will invade your thoughts to stop your vision and send in fictitious divisions of gossip, deceit and deception. Once he has taken your vision captive it’s game over. Prayer is the only way to stop this attack. I’ve given you an example below.

“Well Satan, not today! Here’s a *spoiler alert* for your dodgy two-bit operation. I know my purpose and my vision is clear; I shall not be moved. The unseen army of the Heavenly realms, thousands of angels are on my side. God has already gone before me and He has got my back.  Operation ‘Praying Warrior’ is up and running and this solider is ready for war.”