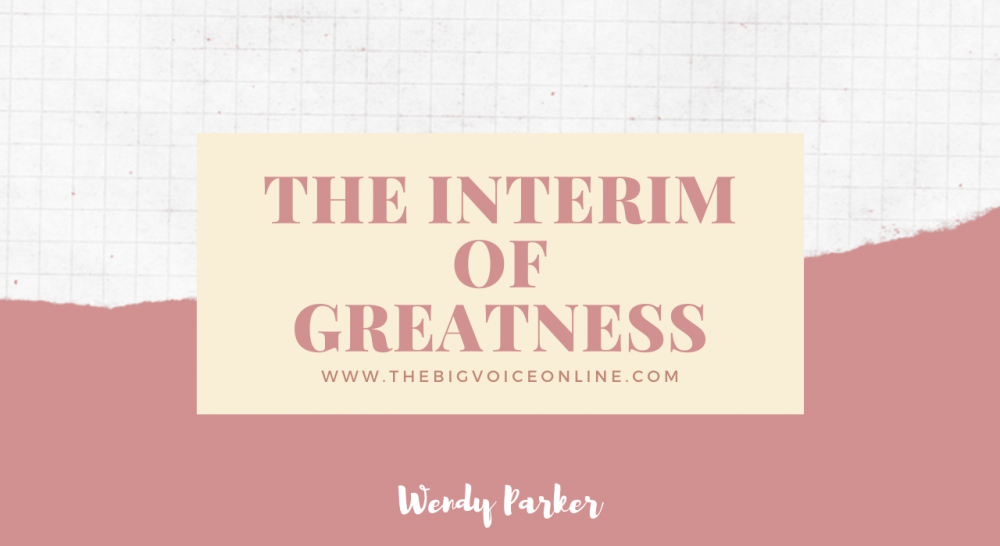 The Interim Of Greatness

Greatness is one of those elusive things in life that can leave as quickly as it came. It only rests on a person for an allotted time and then puff! – It is gone again. The interim of greatness reminds us that it’s only provisional and the length of time you can walk in that greatness all depends on God.

Look at King Solomon, he was a powerful king who ruled an empire, but he saw all his wealth and wisdom as a passing thing. Some say he is the author of the book of Ecclesiastes, but the jury is still out on that one. However, the word that is used a lot in this Biblical book is the Hebrew word, ‘hevel’ which means, vapour or breath.

The Qoheleth, (which means one who gathers), writes about the vanity of vanities in Ecclesiastes. His pursuit in the search for substance in this life leads to his lament that starts with, ‘like a passing mist or trying to hold a breath.’ He goes on to say that power and influence don’t last, and it is like trying to pursue the wind. We read all this in the book of Ecclesiastes, but there is still something within our flawed human nature that still tries to grasp at greatness.

Bible heroes who have risen from a life of complete obscurity into the greatness of their calling are now only remembered by Sunday School stories and a church sermon. But what if we delved deeper? What if we resurrected the passion and the character that fuelled these people to step into the greatness that was offered to them? Instead of focusing on the greatness on the calling on their lives, why don’t we learn more from the passion and character that moved these great leaders to pursue greatness in the first place?

Why? Because that just sounds like hard work. We will happily skip over the character building and the passion of pursuing greatness throughout their stories, just so we can get to the juicy part, the part where they actually step into the greatness of their calling. It’s the part we’ve all been waiting for. But that is just the ‘hevel’ of the story. Like a, ‘a passing mist or trying to hold a breath.’ The greatness we read about becomes vanity of vanities.

If we just read about the greatness of the Bible heroes and skim over the process of how they got there, then we have missed the point completely. This is why greatness is so interim. It is like being a temporary caretaker of something that cannot be seen. David went from shepherd boy to a king. Joseph goes from being falsely accused to second in command of Egypt. Esther is a Jew who becomes Queen and twelve ordinary men go from complete obscurity to the most famous church planters in history.

So much richness in the process of each Bible hero should not be overlooked because it is God’s greatness that engulfs their weaknesses. Isaiah 40:25-26 says, ‘The Holy One asks, “Do you really think you can find someone or something to compare to Me? My equal?” Look at the myriad of stars and constellations above you. Who set them to burning, each in its place? Who knows those countless lights each by name? They obediently shine, each in its place, because God has the great strength and strong power to make it so.’

God’s greatness is permanent, it is continual, and it is seen. It is known in the magnitude of the universe, right down to the smallest blade of grass. His greatness is shown in the sweeping landscape, the vastness of the ocean and the detailed iridescent colour of an insect’s delicate wings. Why do we pursue greatness like gods when our lives are but a breath, a vapour in the wind?

Let’s delve deeper and learn from these Biblical heroes of how God shaped and moulded their character first so they could handle the greatness of their calling and leave a legacy of greatness for the next generation to step into.