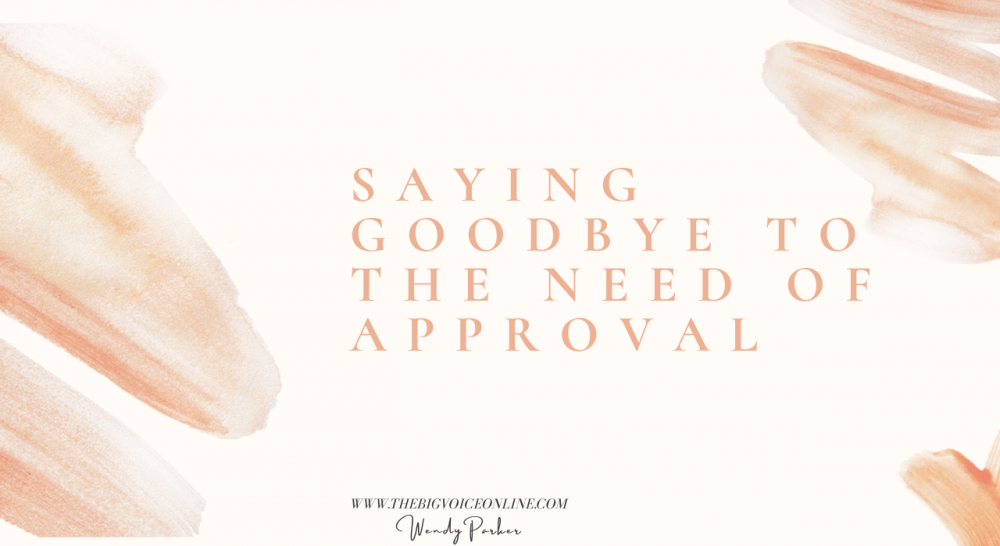 Saying Goodbye To The Need Of Approval

When you’re a recovering people-pleaser like myself, it is a daily choice to say goodbye to the need of approval. I have to suppress the urge of wanting to take the easier option by pleasing people rather than what God has asked me to do. When I chose to do what God wants rather than seek out man’s approval, I find I haven’t had to hustle for my worth.

Paul writes all about approval in Galatians 1:10. He says, “Do you think I am on a mission to please people? If I am still spinning my wheels trying to please men, then there is no way I can be a servant of the Anointed One, the Liberating King.” What Paul means when he says, “spinning my wheels” is that he isn’t going to waste his time doing things that achieve nothing. As far as Paul was concerned, trying to please men was completely useless. He understood a hard-won truth that he couldn’t do the things God told him to do and please men at the same time. If we are to be servants of a liberated King, then we need to be liberated ourselves from the ineffective work of the need for the approval.

Wanting approval from men isn’t at all liberating. Its oppressive enslavement stopping you from fulfilling your calling. Your enemy loves nothing better than to keep you tightly chained to everyone else’s opinion of what you should or shouldn’t be doing, just so you win over their approval.

So, why do all us people-pleasing addicts seek out man’s approval over God’s approval? If we are to truly say goodbye for the need of approval, we’re going to have to get serious with God and sort out a few things. If I’m honest, I find I slip back into needing approval when I haven’t stayed close to God. Prayer is so important if we’re to keep the wolf of approval from nipping at our heels. Setting time aside to talk to God helps you to know exactly what He wants. Saying goodbye for the need of approval isn’t suddenly not caring what anyone else thinks. That doesn’t connect. It rather disconnects you from people. I think what Paul is saying is that after his radical turn around on the Damascus road, he isn’t going to waste energy on pleasing people.

You see the trouble is, when we spend our whole lives seeking everyone else’s approval, we lose ourselves in the process. Believe it or not, there is so much more of ‘you’ just waiting to be discovered. So much more unused ‘you’ just waiting to be free from the need of approval. 1 Thessalonians 2:4 reminds us, ‘…but as we have been approved by God and entrusted with the good news, that’s how we are telling the world. We aren’t trying to please everybody, but God, the only one who can truly examine our motives.’

You have been approved by God. Period. And once we all grasp this truth, then the need for everyone else’s approval on what we should or shouldn’t be doing starts to dimmish. Joyce Meyer puts it like this; “[People-pleasers] have become so good at denying their own needs, they don’t even ask themselves if they have any.” It’s so true. Once we let the demands of everyone take over what we are needing, then martyrdom isn’t far behind. Resentment will slowly set in and you’ll become like a volcano just waiting to erupt. This isn’t healthy for anyone. We serve a liberated king, so it’s high time we starved the beast called ‘approval’ and lived in the liberating freedom that Jesus died for. Stop spinning your wheels and wave goodbye to the need of approval.

Do you struggle with needing the approval of others?

How do you think God wants you to overcome this need?