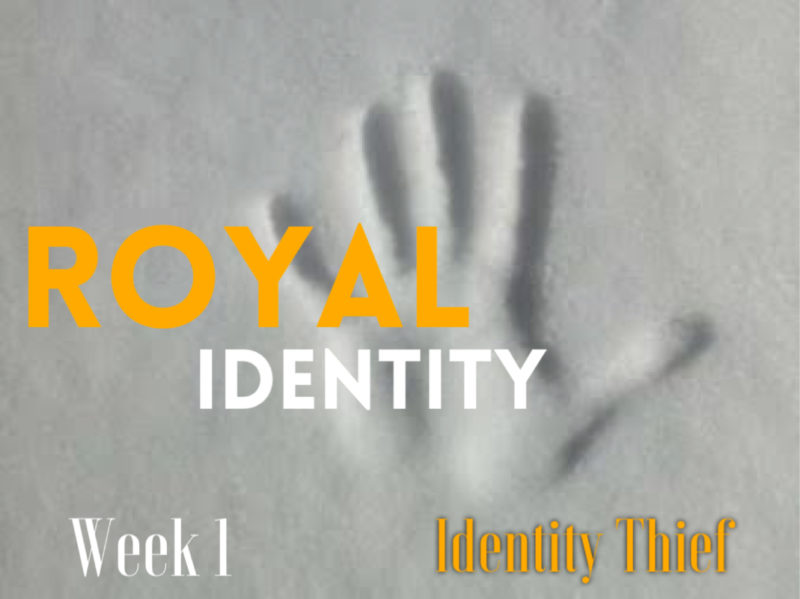 Believe it or not he once was a model of perfection, full of wisdom, perfect in beauty and an anointed guardian cherub.

That was before The Fall.

That was before he became an Identity Thief.

Turning himself into a snake, he waited until he saw an opportunity to approach Eve in the Garden of Eden with his carefully crafted lie.

He only had one shot for his ‘set up’ plan to work otherwise it would be game over.

“Do I understand that God told you not to eat from any tree in the garden?”

The seed had been planted.

And it wasn’t for another fruit tree.

It was the seed of deception.

Eve thought for a moment.

If snakes had hands, Lucifer would be rubbing them together. His plan was working.

Eve was trying to remember exactly what God had told them and she said.

Yeah, you go girl. Tell that pesky pest to take a hike!

“…We can eat from the trees in the garden. It’s only about the tree in the middle of the garden that God said, ‘Don’t eat from it; don’t even touch it or you’ll die.’ ” (Genesis 3 v 2-3 The Message)

That’s the trouble with important information; we forget exactly what was said to us and we start adding our own details.

God never said, ‘Don’t touch it’ and the sly snake knew that Eve had told a lie, because he is the ‘Father of lies.’

Eve had started to slide down the slippery slope towards losing her identity.

And before she knew it she was getting out her sewing kit stitching fig leaves together.

And so Adam and Eve hid.

They felt unworthy of God’s love because they knew they’d done something wrong.

How often do we get blindsided by Satan’s deceptive schemes?

How many times have you listened to the lie that you’ve blown it way too many times for God to still love you?

And instead of clothing ourselves in what God says about us, we scrabble around in the dirt on our hands and knees looking for some fig leaves to cover up our shame and disappointment.

But the most exciting part of this story is:

‘God walked in the garden.’

Hang on. THAT’S the most exciting part?

I know what you’re thinking; it doesn’t quite match up to the final sequence of Marvel’s Captain America movie.

But it IS the most exciting part – because it’s liberating.

And He called out to Adam and Eve, “Where are you?”

God knew what had happened with the snake.

But He STILL came into the garden to meet with man just as He had always done.

And do you know what?

He’s looking for you.

And he’s calling out, “Where are you?”

It says in the Bible that Jesus is King Of Kings and Lord Of Lords.

So if you are a child of God, then that makes you a Prince or a Princess, right?

That is your TRUE identity!

When you realize that God still loves you and still pursues you even when you’ve done a million things wrong, you will be free from the shame and guilt that you feel.

There’s no need to hide yourself anymore.

It’s time to come out from behind that bush.

So before Satan takes out his ‘snake’ costume from his wardrobe once again and thinks up another crafty plan to deceive you into thinking God is mad at you.

Just tell him WHO you are and WHO’S you are!