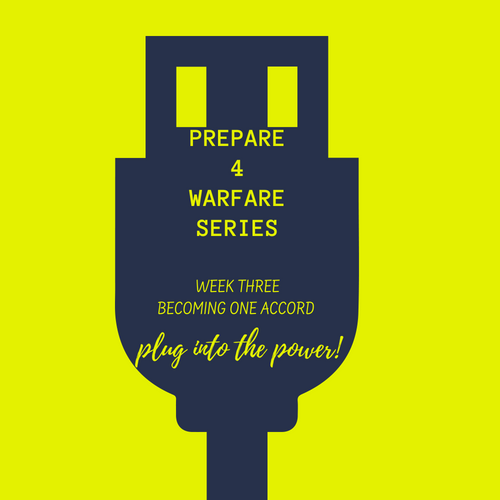 In my Prepare 4 Warfare series this week

We will be zooming in on becoming one accord

Just like the first Church in the book of Acts

If we are not careful, the enemy can divide and conquer us

Unless we stand in unity

So, over the past few weeks in this series

Now, we need to put a covering over everything we value

To stop the elements from destroying our house

Personal, loving relationships with one another brings unity

In his manipulating way, Satan will have us, as believers, so gripped in division

That’s it’s hard to become one accord

Colossians 3:13 says, ‘bearing with one another, and forgiving one another’

God builds and joins together, while Satan tears down and destroys

He fuels the flames of suspicious whisperings

Leaving the weapon of mistrust, that can be unleashed when the timing is ripe

Sowing the seeds of deception among believers has been so successful

That Satan hasn’t changed this warfare tactic in a millennium

A movement of people who are joined together

United together in one cause

And who’ve sized up their enemy

Are highly dangerous to the devil’s plans

You think he’s hasn’t got you in his sights

For a little target practice when you’re in one accord?

I have personally watched leaders

Whom I never thought would be hoodwinked by Satan’s tactics

Fall from great heights by their ego-driven desires, leaving their congregation

Unprotected and vulnerable to more attacks from the enemy

God’s Church needs to become one accord

Becoming one accord means covering from the attacks of the enemy

God’s banner over us, His blessings upon us and His boldness in us

But, we are less likely to get taken out

If we stay together in one accord

I know, I know

I totally get it

Quirks and preferences in this complicated thing we call life

Don’t be mistaken, being in one accord isn’t about sameness

It isn’t about creating robots to be exactly the same

God made us all different

And different is good!

And while we’re at it, one accord doesn’t mean that

We all agree on what colour the new carpet is going to be in the new Church hall, either

Let me break it to you as gently as I can

NONE OF THAT MATTERS!!!!

There, I’ve said it, it’s done

When we shift the focus off of ourselves, Satan has no leverage

We have to be ready to fight for the cause, not fighting with each other

Build up a reputation of being a “little crazy” for God

And not on the Church as a whole

You’ve got him hook, line and sinker

And become united in one accord

I’ll finish this week with a maths quiz for you

You so nailed it, my friend