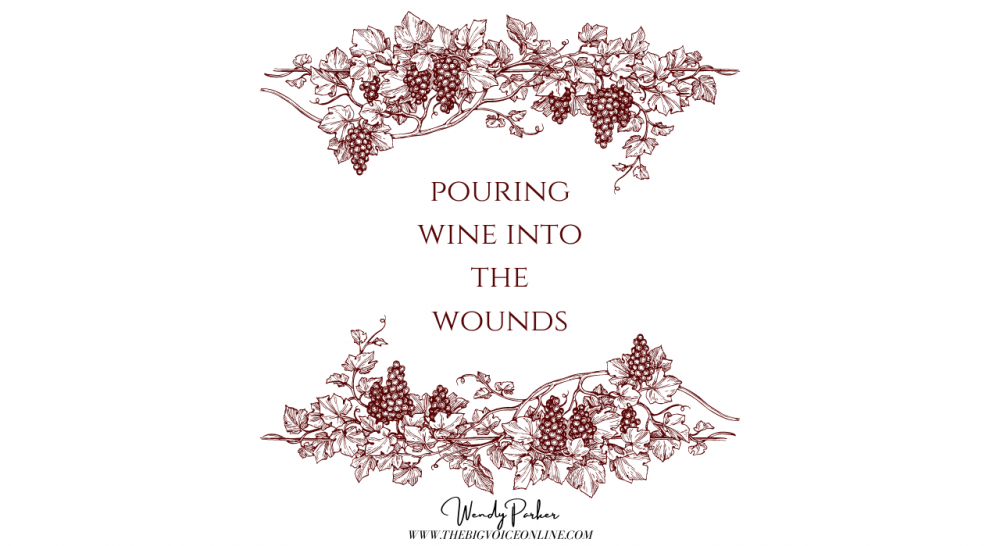 Pouring Wine Into The Wounds.

I’m not going to pretend that it doesn’t sting a little when you’re face down in the dirt, trying to recover from deep wounds, only to discover that the very people who you believe could have helped you chose to pass by you. It’s not that they’re blind and cannot see your condition, it’s just that their river of kindness and mercy dried up when they saw the messy blood trail behind you that led them to the feeling that if they helped you out it could potentially cost them something.

At that moment, we need Someone who is so moved by compassion for us that they don’t just patch up our wounds and say, “good job, now carry on” but is willing to take our brokenness and pour wine into those infected wounds which will heal us back to wholeness.

The parable of the good Samaritan is well known, and whether you’re a believer or not, the principles in this story are deeply ingrained in each one of us on some level. The story is found in Luke 10:30-36, and it is Jesus’ response to a religious scholar who was trying to justify his feelings of guilt. Jesus starts the parable with a Jewish man who has been robbed and left for dead and two religious people see him but choose to walk by. Jesus then brings the story to its conclusion with a plot twist that the religious scholar didn’t see coming…

‘…Finally, another man, a Samaritan, came upon the bleeding man and was moved with tender compassion for him. He stooped down and gave him first aid, pouring olive oil on his wounds, disinfecting them with wine, and bandaging them to stop the bleeding. Lifting him up, he placed him on his own donkey and brought him to an inn. Then he took him from his donkey and carried him to a room for the night. The next morning, he took his own money from his wallet and gave it to the innkeeper with these words: ‘Take care of him until I come back from my journey. If it costs more than this, I will repay you when I return.’

To say that Jewish people and Samaritans did not get along is an understatement, however, to add depth to the teaching that Jesus was presenting, He tells the scholar that it was a Samaritan who saw the Jewish man and helped take care of his wounds. This would have been enough to prove His point, but Jesus didn’t stop there. To drive His point home, He builds on this opening by telling the scholar that not only does a Jewish priest walk by the wounded man and cross over the road, but a religious Levite too.

Maybe some of you reading this right now know what it’s like to be robbed and beaten and stripped by the bandit, Satan, hoping that religion would see you and take care of your wounds, only to be passed by and left half-dead and disappointed, feeling even more hurt because religion chose to walk by you.

Thank goodness Jesus didn’t think the same when He saw our wounded condition, choosing to pour Himself out for us on the cross, regardless of whether we were deserving of His help. Thank goodness Jesus was so moved by compassion that His blood became the disinfecting wine that was poured into every infectious wound that we’ve experienced. Jesus left a blood trail on the cross for you and me to follow that will clean our wounds and mend our broken hearts. Jesus paid the ultimate price so His wine, His precious blood would be poured into our wounds and heal us.

It didn’t cost him something, like the good Samaritan, it cost Him everything.

Have you felt as though religion has ‘passed you by’ when you needed deep wounds to be healed?