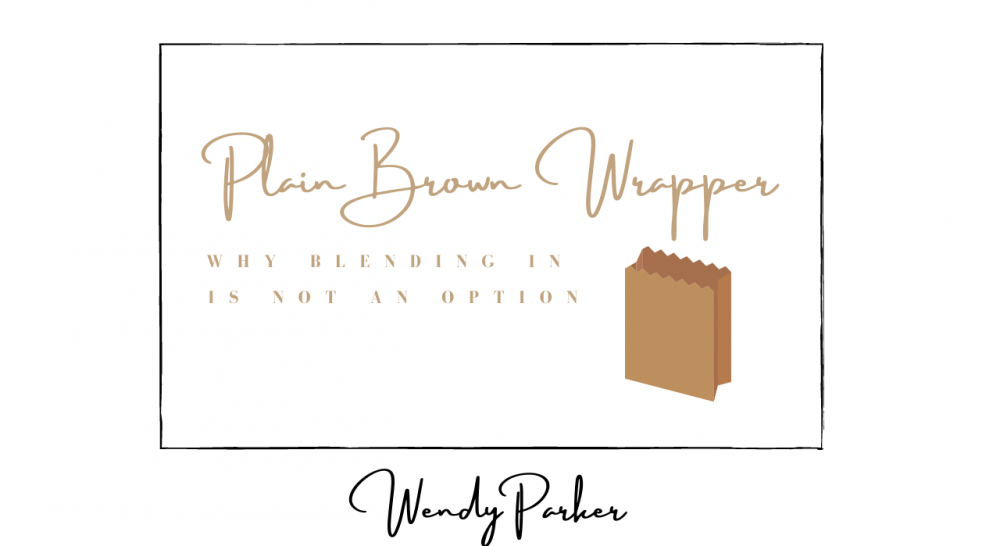 Plain Brown Wrapper: Why Blending In Is No Longer An Option.

Did you know that the native American Shawnee tribe called the elk, ‘Wapiti’ (pronounced Wapeetee) which means ‘white rump’, referring to the animal’s unique wheat-coloured coat? This camouflage helps protect the animal from hunters and predators who like to hunt them down and kill them. Like the elk, we too like to blend into this world so we don’t get hunted down and hurt. Wrapping ourselves in plain brown wrappers so as not to bring attention to ourselves, feeling a sense of protection in the shadows and shades of life, as we all try our best to cover up our faults and failings while carefully constructing reputations, so we blend in with a culture that treats good Christian church folk with contempt. Labelling us as “weirdos” if we stand out and stand up for our beliefs, believing we lean on God for a “crutch” to support our limp, religious, joyless lives.

Unfortunately, many of us have tried to keep the plain brown wrapper of camouflage when we switched our allegiance from Satan’s kingdom of darkness to God’s kingdom of light, hoping our wheat-coloured coats concealed our whereabouts, hiding us from the hunter.

We read in Luke chapter 22 that Jesus tells Peter that Satan has sought permission to sift us all like wheat because of our devotion and discipleship. “Peter, my dear friend, listen to what I’m about to tell you. Satan has obtained permission to come and sift you all like wheat and test your faith. But I have prayed for you, Peter, that you would stay faithful to me no matter what comes. Remember this: after you have turned back to me and have been restored, make it your life mission to strengthen the faith of your brothers.” (TPT)

Don’t think for a second that the bad things that happen to you in this life are just coincidence or by chance. Satan sifts all believers like wheat as the plain brown wrapper of camouflage disappears, revealing the royal colours of your true identity that make you stick out rather than blend in.

You appeared on Satan’s radar the moment you said, “yes” to Jesus and stepped into the light, leaving his hidden, dark kingdom behind you. Now your surroundings have changed, and your wheat-coloured coat cannot protect you any more than the plain brown wrapper you tried to cloak yourself in, because blending in with this world is no longer an option when you’re a Christian. As the hunter of our souls lines up his scope and fires his relentless arrows, our faith is going to be tested. It’s going to be tested so you quit your devotion to God. I know, it’s hard and I get it. Since saying “yes” to Jesus at the tender age of seven, the hunter, Satan, has sifted my faith with childhood trauma, friendship betrayal and seasons of  feeling as though God had abandoned me. However, Jesus has prayed for us all. He’s prayed that we stay faithful to Him no matter how many shots or arrows come our way.

John 10:10 reminds us that the hunter, Satan, has one purpose, ‘…to steal, kill and destroy’ us.  But Jesus gave His life so we could live a better life, a life that is full of purpose. You may have lost your plain brown wrapper of camouflage, but don’t stand there frozen with fear and let the hunter wound you over and over. Follow the protective blood trail Jesus left behind at the cross. James 1:2-4 ‘considers it a sheer gift when trials and tests come our way…forcing our faith into the open…showing its true colours…so we become mature and well-developed.’

Satan may sift you like wheat because of your faith, my friend. However, sifting is where all the debris and lumps fall through the sieve. Sifting separates what is useful and what is not. Sifting involves a careful examination of something. Satan doesn’t realise the fact that all his sifting is actually going to make your faith finer and more useful to God’s kingdom! FYI, He’s a bit stupid that way 😉

Time to leave behind that plain, old brown wrapper for good now that you know who you are and Who’s you are, because blending in is no longer an option.