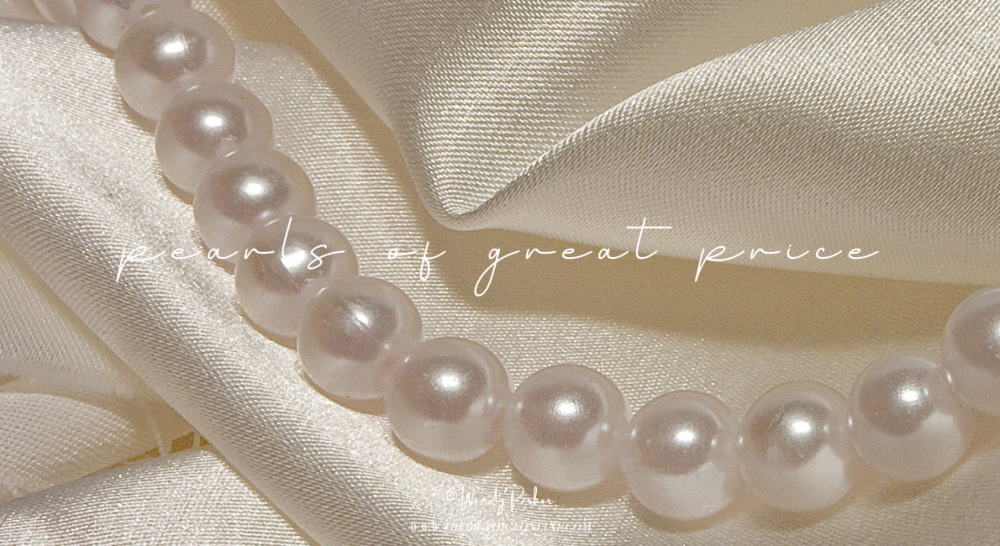 When I say the word ‘pearls’, what thought comes to mind? An image of a little old lady with neatly styled hair, wearing a beige coloured twin set, and skin that smells of lavender soap?

You may smile, but pearls are very special and unique because each one is naturally formed from a parasite entering the shell of an oyster. And rather than letting the irritant damage the oyster’s fragile body, the oyster has a defence mechanism that encases the problem in a solution until it becomes a pearl of great price.

If we go right back to the beginning of the Bible, we find a “parasite” entering the Garden of Eden. ‘Of all the wild creatures the Eternal God had created, the serpent was the craftiest. Genesis 3:1.

The serpent had one goal on his mind, to plant the grit of a half-truth into man’s thinking that would damage the relationship between himself and God. Adam and Eve tried to cover the work of the parasite with fig leaves, but God knew their sin had to be covered with something far more valuable. Something that was going to cost Him everything.

In Matthew 13:45-46, Jesus tells His listeners a parable of what the Kingdom of Heaven is like; “Again, the kingdom of heaven is like a merchant seeking beautiful pearls, who, when he had found one pearl of great price, went and sold all that he had and bought it.” This parable didn’t conjure up images of little old ladies to His listeners, but images of a merchant seeking and pursuing beautiful pearls. A merchant who willingly traded everything he had so he could purchase the pearl of great price.

Adam let the serpent, who had entered the Garden, change his relationship with God. The irritant damaged any hope of man being able to stay in paradise. However, God didn’t zap everyone into oblivion and ask, “Who’s next?” He knew He had given man free will, and Adam had made his choice. But thankfully, God had a plan and He set that plan into motion. A plan that encased the problem with a solution. A solution that Puritan, William Gurnall, once said, “He [Jesus] adored the mercy that made them willing, and then he implores his further grace to strengthen them, and tie a knot, that these precious pearls newly strung on hearts might not slip off.”

Jesus became the Solution that covered the problem, the parasite, the irritant, the sin which entered in.

Jesus became the Bridegroom, who tied the knot in our relationship with Him so that no pearl slipped off and was lost forever.

Jesus became the Merchant who sought beautiful pearls and when He found them He gave His life to purchase them.

Each one of us is a pearl brought at a great price.

God’s victorious plan covered all our sins in His mercy, grace, goodness, and kindness. All you need to do except it.

Perhaps you’ve had words spoken over you that tell you that you’re worthless, you don’t matter, and you’re not good enough?

I pray today that Jesus encases all those lies in His precious blood and shows you the nail prints on his hands and feet. Letting you know that those scars are a valuable reminder of how much you matter to Him.