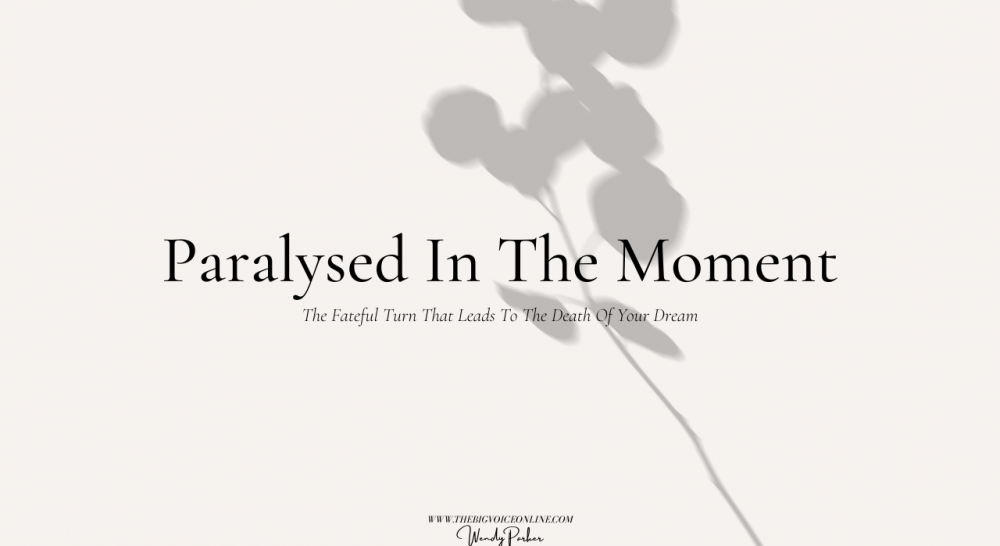 Paralysed in the moment? You’ve become brave and stepped out in faith to where God’s leading you, but now you’re not so sure, now you’re unsettled and disorganised. You find yourself looking back at what you’ve left behind because it’s hard to leave everything you’ve ever known. It’s scary stepping forward and not knowing how it’s going to turn out. And out of that fear, you’ve become stuck. Just like Lot’s wife in Genesis 19 you’ve become paralysed in the moment. She looked back when she was told not to, which turned her into a pillar of salt. The fateful turn led to the death of her dream. So, listen up friend! If you don’t want to end up as a pillar of sodium chloride, then keep reading on!

When I quit my job last year so I could focus on writing full time and my theology degree, I found I was paralysed in the moment. I began to mourn over my loss. And even though I knew it was the right direction for me, I still found that months later after leaving my job, I was looking back at what I’d left behind. My reasons for looking back were the security and stability my job gave me. ‘Safe’ required very little from my faith and now I was stepping into the unknown. However, even though doors of opportunity were opening up to me in my new adventure, I still couldn’t shake the feeling of helplessness that was starting to cripple me until I found myself paralysed by fear and stuck in the moment.

Before you get paralysed in the moment, let me warn you of two stumbling blocks that can cause you to sneak in a fateful glance behind you, that can lead to the death of your dreams.

I think we give Lot’s wife a hard time when we read the story of how God’s messengers came to rescue Lot and his family from total destruction. Lot lived with his family in a place called, Sodom. God was ready to destroy this place because it was a very bad city. In spite of this, Abraham prayed to God to save Lot and his family, and to find a safe passage out of Sodom. As they were getting ready to leave, Lot starts procrastinating. ‘Lot, you need to get up and take your wife and two daughters out of here. Otherwise, you will be consumed along with the rest of the city. But Lot kept procrastinating.’ Genesis 19:16. In the Message translations, it says, ‘Lot was dragging his feet.’ Isn’t it any wonder why Lot’s wife had the same attitude? She would have heard him stalling for time as God’s messengers were practically begging Lot to pack up and leave Sodom.

Understand this; if God prompts you to move in a forward direction, you need to stop dragging your feet. He knows our future better than anyone else does and He’s got your back. I believe we procrastinate because we think whatever God is leading us to is going to go belly up and fail. Your past mistakes and stuff ups rear their ugly heads at this point, whispering that this time will be no different from all those times that you tried and failed before. All that hesitation and wavering is just delaying your destiny. God’s messengers instructed Lot’s family, “Now run! Run for your lives! Don’t look back or stop anywhere in the plain. Head for the hills, or you’ll die along with everyone else.’ Genesis 19:17. If you take a look around in your paralysed moment, you’ll see the tombstones of dreams that died long ago because people didn’t trust God enough for Him to hold their dream in His mighty hands. Dragging their feet by procrastinating caused the death of their dream.

Lot’s wife was heading in the right direction with her family. Leaving the place which God had told them to, and breaking free from the toxic environment she had found herself in. But something made her turn around. Something made her stop and ignore the last instruction from God’s messengers. ‘But lot’s wife never made it’ she lagged behind her husband and looked back – despite the messenger’s advice – and turned into a pillar of salt.’ Genesis 19:26. She found herself paralysed in the moment. The fateful turn killed any dream God had for her in her future. The pivot that consigned her dream to the grave was her longing look of what she was leaving behind. Sodom was going to be utterly destroyed by fire which meant that everything that lot’s wife knew was going to go up in smoke. Isn’t it funny how we trust God enough to get us out of a place, but when He sets fire to our past so we cannot return to it, we grieve for the loss? It’s time to set fire to your past and move into your future. This is the only place where your dreams reside. Your future is waiting for you to become unstuck and to stop looking back.

Don’t disable the future God has for you by being paralysed in the moment and letting fear cripple you to the point of being frozen. You haven’t taken a wrong step. And even though you’ve watched everything you’ve left behind burn, God is the One who has set fire to your past, and He does it to protect you from looking back. He doesn’t want anything left for you to be tempted to go back to. The fateful turn which will solidify you into a pillar of salt isn’t what God wants for you. Trust Him as you run toward your promise and watch as He guides you in every step toward your dream.

Have you found yourself looking back at your past? How have you kept your feet moving forward?