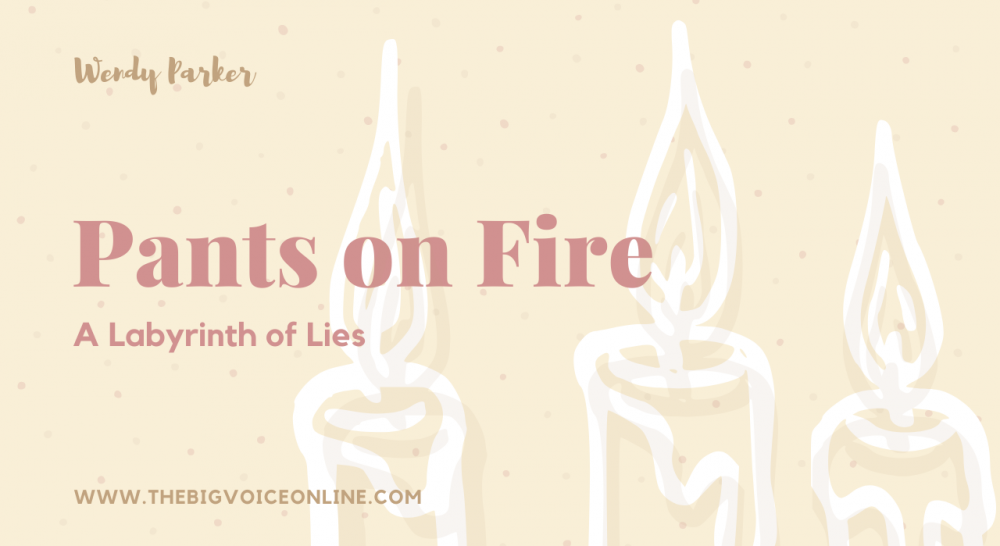 A Labyrinth of Lies

“Liar, liar, pants on fire!” Remember that little saying we used to use to call someone out when we were kids? During this season we can let our thoughts unravel if we don’t stay alert to the devil’s schemes. These moments of uncertainly can lead us into an anxious, stress-filled, I-don’t-know-what-I’m-going-to-do, panic mode that will have faithful believers waving the white flag before they’ve realised what’s happened. However, Jesus says in John 8:44 that the core of Satan’s character is that he’s a liar and he is the father of lies. So, why do we fall for the enemy’s labyrinth of lies so easily?

One of our favourite 1980’s movies we like to watch as a family is, Labyrinth. The cult hit stars the late, David Bowie and actor, Jennifer Connelly. If you have never seen the movie, the story is about Sarah, a teenager who lives in a fantasy world but has to deal with the dreary reality of looking after her constantly crying baby brother. After Sarah realises that her wish for her brother to disappear for good has actually come true, and the Goblin King she called upon has taken her at her word and kidnapped her baby brother, she goes into the mysterious Labyrinth to find the Goblin King’s castle so she can save her brother. There is a scene toward the end of the movie where Sarah finds herself back in her bedroom. She finds comfort in all her teddies, dolls and trinkets. However, she soon realises that it’s all fake. The Goblin King has hoodwinked Sarah into believing that she has left the Labyrinth and is back in her comfortable bedroom when in actual fact she’s still in the Labyrinth and she still needs to rescue her brother. After waking up to her condition, Sarah now understands what she needs to do to get back her baby brother. Stop listening to the Goblin King’s lies, take some responsibility and finally grow up!

I believe there is a message for all of us in this movie. If we have a desire to stay within our comfort zones and not grow up spiritually then how will we find the strength to fight? As long as Satan can keep our eyes fixed on things which don’t really matter, he has won. Maybe these are harsh words to hear. However, like the Goblin King, Satan is actually scared of you. Oh yes, he knows that if you decide to stop listening to all his lies about who you are and actually trust what God says about you, then he’ll have no power over you. Period.

It’s time to arise, dear reader. This season, I believe, is where we stop endlessly going around within the labyrinth of lies that Satan has built within our thinking and fix our eyes on Jesus. I pray that your eyes will be opened to the schemes of your enemy. He has had you running back and forth around in that labyrinth of lies for years, until you’ve become so frustrated that you just decide you’ll never reach the castle and rescue your brothers and sisters, so what’s the point? Well, today you say to your enemy, “Liar, liar, pants on fire!” 2 Corinthians 2:11 reminds us to not be complacent. ‘It’s my duty to make sure that Satan does not win even a small victory over us, for we don’t want to be naïve and then fall prey to his schemes.’

Satan’s hatred towards God’s people is huge and he will lie and lie and lie to you, so you’ll stay small and contained in your faith. In Hanna E. Farwell’s book, The Sword and the Tambourine, she talks about Satan’s plans to keep God’s people spiritual infants. “When we start growing spiritually and bearing fruit, we will start noticing some resistance…Satan sends it, and the Lord allows it; one means to stop us, the other to push us to a greater level of awareness and endurance to fight.”

God wants to see you grow up, so you’ll become an overcomer. He wants you to withstand Satan’s scheming lies and tactics. But you can only do this when you pray, read your Bible and stay close to God. Too many Christians seem to forget that we are in a war and so they don’t study what they need to counteract the devil’s lies. Paul reminds us in 1 Corinthians 13:11 “When I was a child, I spoke, thought, and reasoned in childlike ways as we all do. But when I became a man, I left my childish ways behind.” Growing up means getting out of the comfort zone mentality where all your teddies, dolls and trinkets have held you back from taking responsibility, growing up and rescuing people from the Goblin King.

It’s time to leave the labyrinth of lies by using the authority Jesus gave to you, and then you can confidently say to the devil, “Liar, liar, pants on fire!”