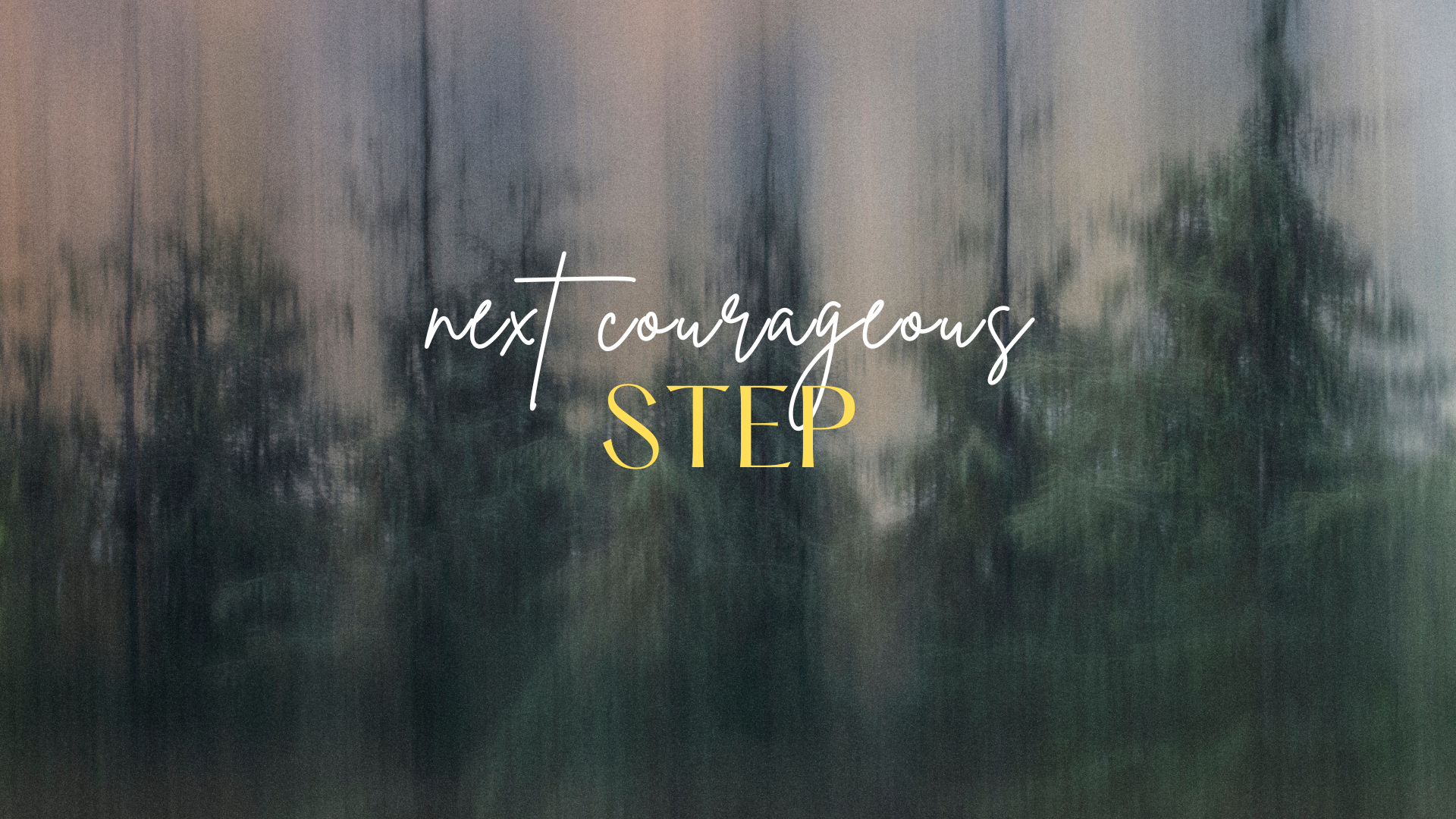 What does your next courageous step look like? It’s different for everyone but the chasm to cross still looks the same – Scary. That enormous gap, that gigantic step, the massive move you need to make between where you would like to be and where you actually are always feels way too wild, too crazy, too wide, and too far to position yourself into. Perhaps it’s time to take one step toward what you were born to do.

Yeah, that’s it, just one little step forward that’s going to help you to stop walking around in circles because you’ve been too busy admiring, comparing, measuring, and wondering what everyone else is doing. I know, it’s not easy, because like you, I too think. No correction, I believe others have more talent, more spiritual gifts, more money, more time, more worth, more networking contacts…well, whatever it is you and I believe people have more than and we somehow severely lack. And so sadly, we shrink back into our circle of comfort never daring to take that next courageous step.

The tension of uncertainty is where the uncomfortable feelings sit. As John Cleese points out in his lecture on creativity, “If we have a problem and we need to solve it, until we do, we feel (inside us) a kind of internal agitation, a tension, or an uncertainty that makes us just plain uncomfortable. And we want to get rid of that discomfort. So, in order to do so, we take a decision. Not because we’re sure it’s the best decision, but because taking it will make us feel better.”

I don’t know about you, but I’m tired of going around in indecisive circles, causing me to take or make wrong decisions because they make me feel more comfortable. I think this is the real reason we keep going around and around and ending up back where we started on our faith-filled, scary journey toward our future because we hate feeling all those yucky uncomfortable moments along the way. So, we make a poor decision in the wrong direction when we know we need to take the next courageous step forward toward our destiny.

I mean, where do we get the impression that all this walking-by-faith stuff is easy? Have you read your bible lately? There are some seriously big, courageous people packed in all those wafer-thin pages who heard the call from God. Surprisingly though, they all have one thing in common. They transitioned and repositioned themselves so they could take the next courageous step. They sat in all those uncomfortable, scary moments and waited on God. And you know what, God showed up and instigated the next courageous step for them to take. However, to take that step they had to turn aside from their past, not look around at their present circumstances and trust God with their future.

Look at Moses. He fled his royal favoured life in Egypt because of past mistakes and was visited by God after forty years. His present circumstance found him as a shepherd who tended sheep in the desert and God found him because He wanted Moses to do something of significance.

Notice in the story God wasn’t concerned about Moses’ past mistakes. He didn’t wait for Moses to have more time, money, talent, spiritual giftings, or networking contacts to speak into his future. God spoke into Moses’ present circumstances and appointed him as a leader to help set the Israelites free from the slavery of Pharoah. ‘And the Angel of the Lord appeared to him in a flame of fire from the midst of a bush. So, he looked, and behold, the bush was burning with fire, but the bush was not consumed. Then Moses said, “I will now turn aside and see this great sight, why the bush does not burn. So, when the Lord saw that he turned aside to look, God called to him from the midst of the bush and said, “Moses, Moses! And he said, “Here I am.”’ (Exodus 3: 1- 4)

Chuck Pierce says, “He [Moses] turned from his past and present to see his future.” I believe this is the key to taking the next courageous step into the future God has for us. The uncomfortableness we feel is in the transition and the repositioning from our past and then the present we find ourselves in as we look toward the future God has for us. God is still speaking to us from burning bushes and He still calls people toward their destiny. It’s just whether we choose, like Moses, to turn aside and notice. When we’re willing to turn aside and change our position and reposition ourselves so we can hear what God wants us to do, then the transition won’t be as scary.

Don’t you think it’s time to stop letting last season’s mistakes hold you captive and start walking toward the next season’s freedom?

All it takes is for you to take the next courageous step!

Do you find yourself going around and around in circles because you dislike the uncomfortable feelings that come with transition and repositioning?

I pray that today you will take the next courageous step into the future God has for you and leave your past mistakes behind you. Step into the freedom of this next season with God’s confidence and strength! Amen.