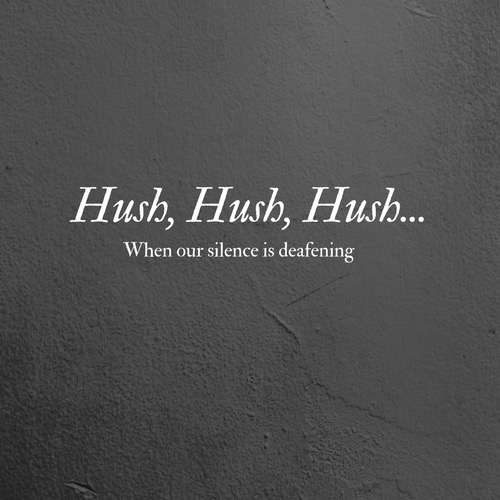 Hush, Hush, Hush… – When our silence is deafening

Which invite people to think about where they’ll spend eternity

So, we listen to that oily voice

Which gives it the power to cast its spell

Pulling us back behind an iron curtain of silence

And retreat back into our comfort zone

Back into the silence that fear so happily produces

Validating and excusing our reasons for not speaking out

Over time, we have been slowly but surely lulled into a deep sleep

And it has become deafening

WHEN OUR SILENCE IS DEAFENING

In the absence of a good sound, the enemy has used our silence against us

Making sure the Gospel is devalued and rendered useless

To a sophisticated, modern world, that neither wants or is interested

In a Saviour who loves them

The voice that says, God is angry at them

So, you’d better be good and obey these set of rules

Because if you don’t, you’ll end up in “you-know-where”

Grilled like a piece of meat on a never-ending barbecue

Don’t let the enemy hush, hush, hush you into silence!

This world is desperately listening for a sound

They know something is missing in their lives

“What would you have me do with this Jesus…?”

People are asking the same question

And they need an answer to that question, not our silence

I know what you’re thinking, “How can I be used by God to help a lost and dying world?”

You just open your mouth!

To do extraordinary things

You just live it!

Our silence has been deafening

But now it’s time to speak out and rise up

“A new song for a new day rises up in me every time I think about how he breaks through for me! Ecstatic praise pours out of my mouth until everyone hears how God has set me free. Many will see his miracles; they’ll stand in awe of God and fall in love with Him!” (Psalm 40:3, The Passion Translation)

When you fall in love with God, the enemy cannot silence you

God’s living words will be written on the pages of your heart (Psalm 40:8)

This world needs you, my friend

To become vulnerable and real with the people you encounter

It’s high time the enemy was silenced – not us

Because this world needs to hear a good sound

And you, my friend

Are the extraordinary, love-filled person to speak up about how wonderful God is

You just need to be a little bit brave