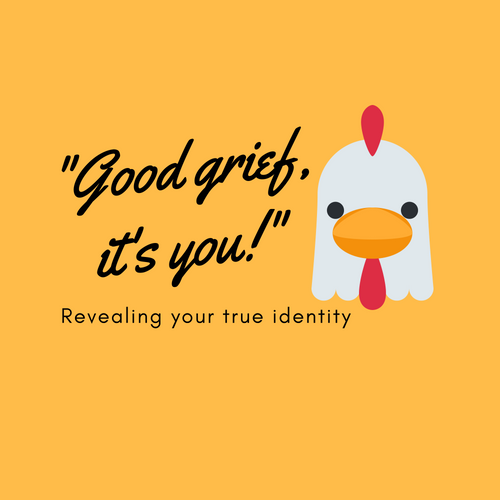 I love that scene in my favourite Wallace and Gromit movie, ‘The Wrong Trousers’ where the rubber glove is pulled off the penguin’s head, revealing his true identity. Astounded by this revelation, simple-minded Wallace exclaims, “Good grief, it’s you!”

Of course, to everyone else it’s obvious, but the rubber glove on the penguin’s head, is the only thing stopping Wallace from realising it isn’t a chicken that’s committing all the robberies, but a penguin! The very same penguin who’s living in his house!

No matter how many times I’ve watched that scene, I laugh. Seriously, it never gets old!

There are many stories found in the Bible of, “Good grief, it’s you!” moments. Moments where someone’s true identity is revealed. Like a ‘whodunnit’ in a murder mystery.

Take Joseph, for example in Genesis 45. His brothers had to go to Egypt to buy food, so they wouldn’t starve, Joseph revealed his true identity to them. He told them he was the brother they had sold into slavery and now, all these years later, he was Prime Minister of Egypt. You can just imagine, Joseph taking the red, rubber glove off his head and his brothers shouting in unison, “Good grief, it’s you!”

Or what about Saul?

Saul was the worse persecutor of Christians and his reputation of being the meanest, hardest Christian-hater, literally sent shivers down your shivers! But, God took a hold of Saul and he had an encounter on the road to Damascus.  God changed his name from Saul, to Paul. I can picture it now, Paul standing in front of the very Christians he’d persecuted in Acts 9:21. He stands up in the Synagogue and, (drum roll please) takes off the red, rubber glove from his head, and as the crowd gasps, someone from the back shouts, “Good grief, it’s you!”

Then there’s Peter, the rock, in Matthew 26:69.  A servant girl saw him and exclaimed, “Good grief, it’s you!” And instead of boldly confessing that, yes, he was indeed a disciple of Jesus, Peter hid behind the red, rubber glove disguise and played chicken. Flatly denying even knowing Jesus. Three times someone tried to take off that rubber glove on Peter’s head, to reveal his true identity and then…well, we all know what happened next.

So, let me give you some advice. Don’t you think that it’s high time you stopped wearing that red, rubber glove on your head? Hasn’t the enemy done enough damage to your self-esteem by making you think that you’re a chicken?

Did you know that you are a chosen, beloved, holy child of God?

And when God reveals your true identity of who you are in Him, you don’t need to hide yourself under that red, rubber glove anymore.

In God’s gigantic, unconditional, unfailing love for you, you can take off that disguise and be who you were born to be. You are so valuable to Him and He wants the best for you.

No more playing chicken, my friend! Believe what God says in His Word about you is true.