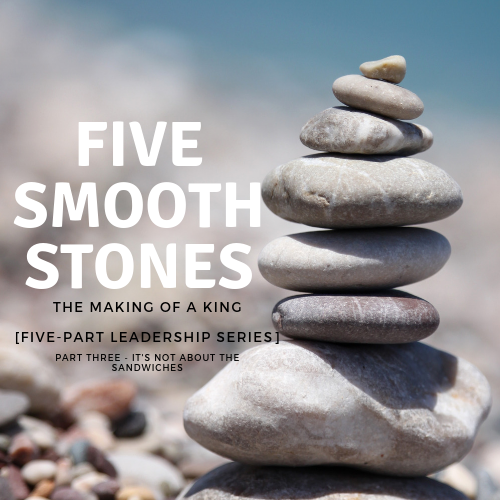 Five smooth stones Part Three – It’s not about the sandwiches

Wow! You are powering along this series! This week, it’s not all about the sandwiches, my friend.

Sandwiches? What has cheese and pickle on wholemeal bread have to do with leadership? A lot more than you think. David had to take provisions to his brothers on the front line of the battle and let his father, Jesse, know what was happening with the men of Israel and the Philistines.

After God has anointed your head with oil and after you have fought off the lion and the bear, the next thing God does to prepare you for leadership is to bring you to the attention of other leaders.

IT’S NOT ABOUT THE SANDWICHES

When God needs you to be somewhere, He’ll use anything to do it — even sandwiches. But I thought you said it’s NOT about the sandwiches? It isn’t. God needed people to notice David as a warrior and not a shepherd boy.

Enter David’s oldest brother, Eliab in the story. He overheard David asking the other soldiers what the reward was for killing Goliath.

“Why have you come down here? Who is watching your tiny flock in the wilderness? I’m your brother, and I know you — you’re arrogant, and your heart is evil. You’ve come to watch the battle as if it were just entertainment.” 1 Samuel 17:28 (The Voice Translation)

IT’S REALLY NOT ABOUT THE SANDWICHES

David had been back and forth to that battlefield, bringing the sandwiches. He’d watched and heard Goliath taunt the army of Israel and he’d had just about enough. He fires straight back at his older brother, “What have I done now? I was just asking a question.”

SERIOUSLY, IT’S NOT ABOUT THE   SANDWICHES!!

Sometimes it’s the people closest to you that cannot, or refuse to see the leadership gifting on your life. Clearly, David’s older brother had watched his baby brother be anointed by the prophet Samuel to be the next king, but he was still treating him like a shepherd boy.

So, what do you do when this happens?

Verse 30 says that “David ignored him…” And sometimes that’s the best thing you can do when someone doesn’t acknowledge the call of leadership on your life. It’s not your job to convince them that you’re a leader. It’s not worth your time to explain to them why you’re doing what you’re doing.

Those sort of people get rattled by all your questions. They respond with answers like; never, impossible and it will never happen. They put limits on your leadership calling because all they see is a shepherd boy delivering the sandwiches and not the warrior you truly are.

David knew Goliath was just a big, ugly bully and he was not happy that he was making fun of God. David was motivated to action because he placed his trust in God and not himself.

In the words of Joner C. Nader, “There’s a difference between “motivation” and “incentive.” The former must come from within while the latter comes from external elements.”

True leaders don’t tolerate things just because “that’s how things are around here” they find a better solution. David’s motive was to show this giant that even though he was small, God was all-powerful and mighty. And with the smooth stone of courage in his hand, this moment was not about the sandwiches, this moment was all about the making of a king.