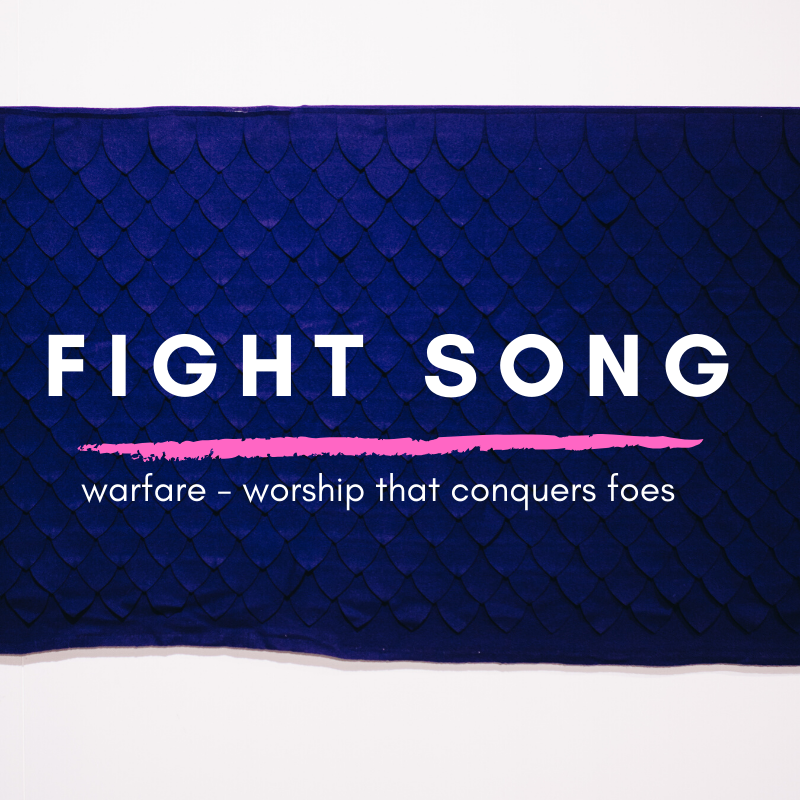 As I sat in church waiting for the service to start, I felt imprisoned by my own thoughts of worry. The ‘what if’s’ and ‘maybes’ swam around in my head like a shark waiting for its next meal. Then, worship started and instantly I felt God’s peace flood my heavy heart. I raised my hands in warfare-worship ready to conquer my foes. This was my fight song

Some days we feel so free that we’re dancing on a mountain top while other days we can feel shackled to the curve balls that life throws at us. This is when you need to find your fight song. This is when you need to start singing warfare-worship. Psalm 18: 34-35 declares, “You’ve trained me with the weapons of warfare-worship; now I’ll descend into battle with power to chase and conquer my foes.”  And sure enough, David, who probably wrote this Psalm conquered many foes because of his warfare-worship.

Paul and Silas in Acts 16 also put on their armour and sung warfare-worship in prison. If ever there were two people who needed a fight song it was them. ‘It’s midnight. In the darkness of their cell, Paul and Silas-after surviving the severe beating-aren’t moaning and groaning; they’re praying and singing hymns to God.’ Acts 16:25, (The Voice Bible)

Imagine, sitting in a chamber of darkness shackled by your ankles, removed from society and thrust into a foul-smelling dungeon of neglect, mocked by the jailers because of your faith, confined to an underworld that resembled the gates of Hell? You’d feel like moaning and groaning in those conditions, right?

So, what’s a fight song and how does it change things? A fight song is where you start to pray and sing so the ground begins to shake. A fight song is one that makes the very foundations of your prison cell crack wide open. Sing warfare-worship during your worries, raise up a fight song through your storms because it opens the door to your freedom.

‘The prisoners in adjoining cells are wide awake, listening to them pray and sing. Suddenly the ground begins to shake, and the prison foundations begin to crack. You can hear the sound of jangling chains and the squeak of cell doors opening. Every prisoner realises that his chains have come unfastened.’ Acts 16:25-26

Did you catch that?

The other prisoners heard Paul and Silas praying and singing their fight song. Even though their situation seemed hopeless, warfare-worship broke the chains off them too. When you start to worship God during your most painful, hopeless circumstances, your fight song becomes so powerful that people will listen which sets them free too.

It gets better. Paul and Silas’ fight song not only rocks the jail’s foundations and snapped the shackles off the prisoner’s ankles, but the best part is that the jailer became a believer. ‘The jailer sends his assistants to get some torches and rushes into the cell of Paul and Silas. He falls on his knees before them, trembling. Then he brings them outside. “Gentlemen, please tell me, what must I do to be liberated?” Acts16:29

The jailer experienced the power of a fight song. He had witnessed warfare- warship at its best! The key to his own prison cell unlocked his heart to redemption. That’s how powerful a fight song can be. Warfare-worship has the power to chase and conquer your foes. So, start singing!