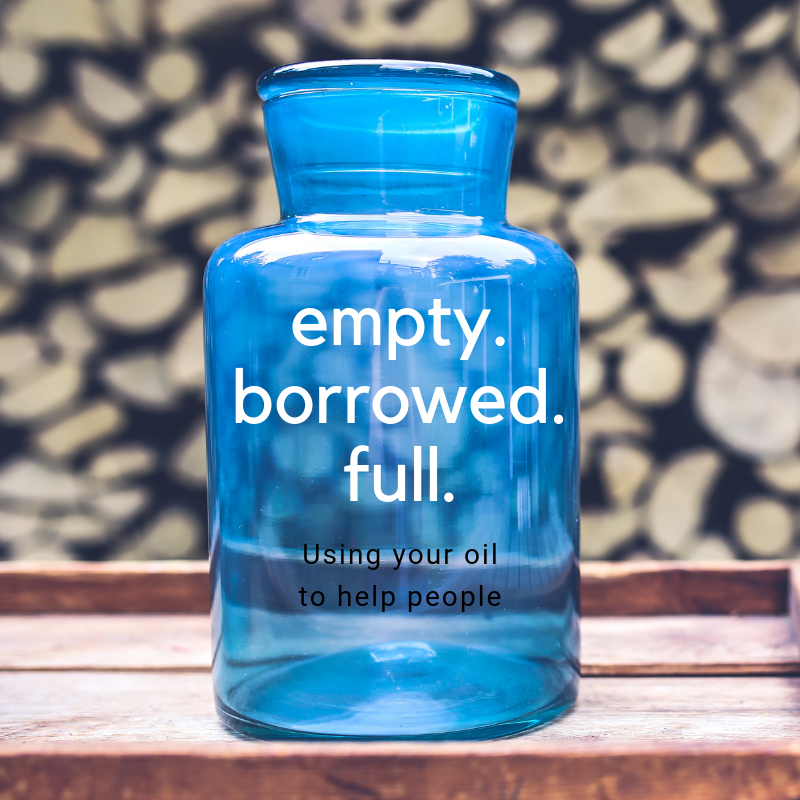 Do you know any empty, borrowed jars that need filling? You just need to look around you and see that there are lots of people that need your oil to help fill them.

The story about the widow’s oil is one of my favourites from the Old Testament. It talks about empty, borrowed and full jars. These jars saved a woman’s children from slavery.

Here’s a quick run down of the story which is found in 2 Kings chapter 4.

A widow is in debt. Actually, she’s up to her eyeballs in it. The creditor has tried to phone her, email her and send letters by snail mail about paying back the debt she owes. But now the debt collector is determined to get back what this woman has borrowed. He’s on his way and the woman doesn’t know what to do.

The widow cries out, desperate for God to intervene. Enter the Prophet Elisha, on his white horse. (Cue epic music!) Okay, okay, that probably wasn’t how it happened. But, I’m sure it would have felt that way to the widow.

Elisha says to the widow, “What shall I do for you? Tell me, what do you have in the house?” I love the fact that Elisha didn’t try and skim over the woman’s dilemma. He got straight to the point asking her what he could do for her.

The widow says to Elisha, “Your maidservant has nothing in the house but a jar of oil.”  Elisha thought for a moment and said, “Go, borrow vessels from everywhere, from all your neighbours – empty vessels; do not gather just a few.”

The reason why people think they can’t be used by God is because they tell Him that they have ‘nothing in the house but a jar of oil.’

When you start to pour your oil into other people, you will see amazing things start to happen. All it takes is you pouring what oil you have into the empty, borrowed jars that God puts in your path.

This is the great thing about God. With a little faith, God can supernaturally increase your oil. BUT, only when you start pouring it into empty, borrowed jars.

Except, Satan doesn’t want you pouring all your oil into empty jars.

He doesn’t want you filling people’s jars with the love of God. He wants those jars to stay empty with no sense of hope. He will remind you that you only have a little oil. So, it’s probably best not to pour it all out into those empty jars otherwise you won’t have enough for yourself. Besides, you’ve told God that’s “all you have in the house,” why squander that precious oil on other people?

The ‘creditor’ is coming to take people as his slaves. Don’t let him! Start pouring your oil into those empty, borrowed jars.

I know, I get it. Pouring yourself out into other people can be completely exhausting. Yes, it can be. That’s why we need God’s strength. Elisha told the widow to ‘shut the door behind her’

Shut the door behind you and spend time with God. Let Him multiply your oil. Shut the door to the critics who tell you that you’re wasting your time pouring yourself out into people.

Full people start to fill other people up. So you will see your oil multiplying right before your eyes!

And that nasty creditor? Well, he can take a hike because no one needs to be his slaves anymore. Why? Jesus paid our debt once and for all.