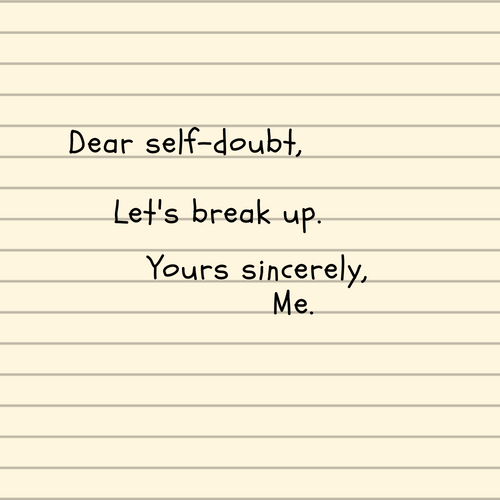 Dear self-doubt, let’s break up – Trusting God at His Word

Let’s break up, yours sincerely, Me.

What if you wrote a letter like that to self-doubt?

What if you told it exactly how you feel?

What if you told your self-doubt

That this relationship is totally and completely over?

That you’re taking control of things from now on

Would you be able to start trusting God at His Word?

See, it isn’t really self-doubt that you’d be writing to

I mean, we name it “self-doubt” because it sounds good

But the truth is

That it’s fear, wrapped up in a fancy suit

And if we call it out by its real name

You see, the thing about self-doubt

Is that it doesn’t respond well to change

It starts to question your motives for the break up

And before you know where you are

You’re tearing up that, Dear self-doubt letter out of obligation

Just to keep it from questioning you

Self- doubt doesn’t want to have a future without you

You haven’t planned, waited or thought through enough about what you’re going to do

It could all go pear-shaped

And you don’t want that

These things take time, you know

And you have heaps of time to figure it all out

In fact, all the time you’ll ever need

To NOT do that thing you’ve dreamed, talked about and wanted to start

“Why would you want to start something,” it will ask you, “if you’re only going to fail?”

No, no, no, this letter will not do

Best to wait until later, you know, until you feel more qualified for the task ahead

And you have to have part A,B,C, and D in place first

But what if you ignored all that?

What if you pushed past all that self-doubt talking

And actually did something about the thing that’s burning in your heart?

What if you really did break up with self-doubt?

TRUSTING GOD AT HIS WORD

Moses is one of the Bible greats

But, even he was plagued with self-doubt

Exodus 4 is where Moses gives God a barrage of excuses

It actually says in Exodus 4:18 that Moses was, “barely convinced”

God speaks to him directly from – get this

And Moses is, “barely convinced” that he can pull this thing off?!

Not exactly the response God was looking for

To say that Moses wasn’t going doo-lally with excitement

Is a total understatement!

When you are plagued with self-doubt

You’re saying, “God, I don’t trust you at Your Word”

You feel as though you’ve let people down, totally stuffed up and failed many times in the past

And yet, in spite of your failings, God still says, “You’re my guy”

So, don’t waste another moment

Write that break up letter to yourself

And leave self-doubt behind you

Because it’s a liar

Stick with your tribe

And don’t settle for a mediocre life

You have so much potential, my friend!

He just picks people who are ready and available

To say a big, hearty  YAASSS!