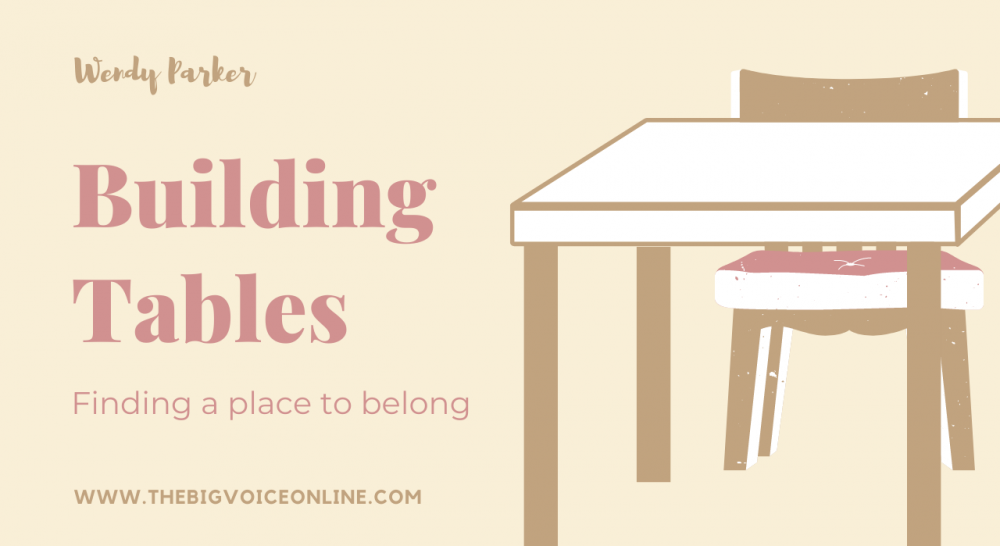 Finding a place to belong

I read an Instagram post that Darlene Zschech posted the other day. She said that we are “building tables where everyone can find a place to belong.” I couldn’t agree more, Darlene. We all want to feel like we belong. A sense that we are accepted for who we truly are is really important to our health and well-being. It’s what improves our motivation and happiness in so many different ways. Building tables is all about letting the outsider know that “there is a seat for you.” A place that is set aside where they can take off their bad- reputation, rejection-from-others, performance-based, I-have-it-altogether masks and rest awhile in the comfort of acceptance.

I believe that it is no coincidence that Jesus’ earthly father, Joseph, was a carpenter. Jesus would have made all sorts of tables as Joseph began to teach and show his son the craft of working with wood. And even though Jesus had to lay down his carpentry tools so He could eventually pick up His cross, He still built tables right throughout His three-year ministry.

Cliques. I hate them with a passion. Because at the very core of our being we want to feel accepted and find a place where we belong. Being shunned isn’t so noticeable at first, but over time it slowly dawns on you that you are becoming more and more isolated by the ‘in’ group. Feeling shut out by others speaks loudly to your soul and lets you know that you are not welcome anymore. It says that you’ve been branded ‘the outsider’ and no matter how many people-pleasing efforts you try to do to fit in, it doesn’t work. Those who decide that you don’t belong because of your bad decisions don’t know how to build tables. We see this happening in John Chapter 4. It tells the story of a woman who has been left outside alone.

Quickly and quietly the woman made her way toward the well. As the sun beat down on her, she lowered the bucket down into the deep, dark hole. The tight-knit group of ladies who kept a running tab of who was “acceptable” and who was “questionable” whispered their disapproval of the woman, making it painfully clear that she wasn’t deemed fit to hang around with the elite, established insiders. The woman in question wasn’t welcome at the well in the cool of the day. So, to save herself from the awkward glances, the discomfort of gossipers and the icy cold shoulders, she had to draw her water at noon when the sun was at its hottest. She isn’t named, she’s just ‘the woman at the well’ and Jesus unexpectedly talks to her.

He asked her for a drink, “Would you draw water, and give Me a drink?” (John 4:8). Right there, Jesus starts to build a table out of the cuts of wood that up until now had been the woman’s barriers. These barriers had held this woman in a prison of isolation. However, Jesus didn’t see an outcast, He just saw discarded pieces of wood that could be used to build a table, so this woman felt valued.

Throughout their conversation, Jesus revealed that He knew her big secret; that she had been married five times and the man she was now living with wasn’t her husband. Not something that would go down well in the polite, ‘How’s your week been?’ conversation around the tea urn and plate of sandwiches after a church service. This woman no doubt knew her failures. She felt the sting of her mistakes every time she was shunned at the well by the other women. But after one conversation with Jesus, she saw Him. The coming Messiah. Jesus told her that, ‘The Anointed is speaking to you. I am the One you have been looking for.’ (Verse 26)

If this woman in John Chapter 4 had still been wrapped up in the phoniness and hypocrisy of trying to please the High Society of Well Women, who’s attitude matched their starched collars and sixty denier stockings, she would have never encountered Jesus because she wouldn’t have needed to draw water in the midday heat. Jesus was building the woman a table to sit at, so she felt loved, accepted and valued.

So, thanks to the mean girls who made her feel like an outsider at the well the woman finds herself in the pages of the Bible. She has been preached about in hundreds of sermons across the world for centuries. She is the first woman evangelist because she went and told the whole village about the ‘stranger she had met, and He knew everything about her” (verse 29) Funny how there’s no mention in the Bible of the select group of high society women who tagged this woman as a ‘Home Wrecker’. Jesus saw the woman’s pain and reached out to her. He knew what it felt like to be shunned. He knew what it felt like to be an outsider, to be left outside alone.

Jesus is still in the business of building tables, so people feel like they belong. After all, He’s still a carpenter. And He builds a table for you right in front of your enemies. Just like the woman at the well, it doesn’t matter how many mistakes you’ve made Jesus accepts you and welcomes you into His presence, so you can sit at the custom-made table He’s built just for you.