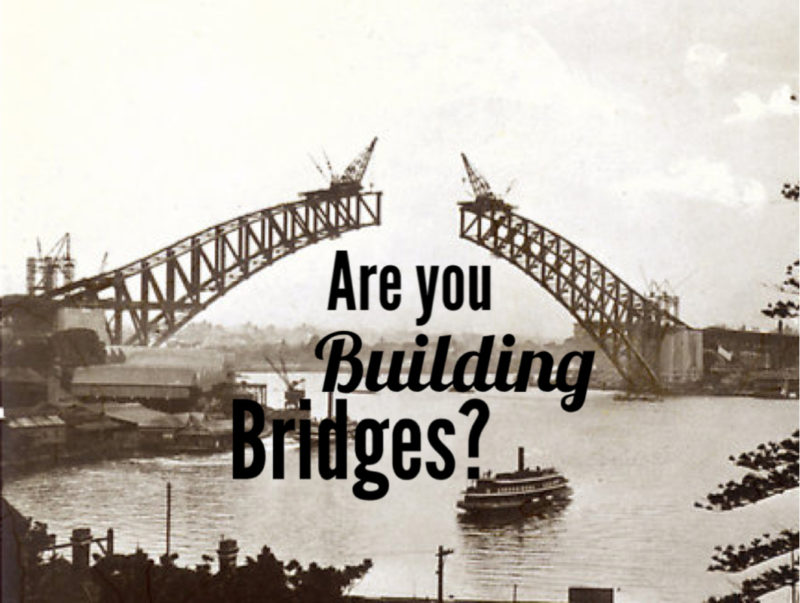 Are You Building Bridges?

The dictionary definition for the word bridges says, that they are a structure built for connection. They provide a safe passage to the other side of a river, chasm or road.

Don’t you just love that?

A bridge is a structure built for connection so it can provide a safe passage.

But you’re thinking, ‘I don’t have any bridges?’

Generational bridges. They are the safe passage that joins one generation of believers to the next.

I need to let you in on a little secret.

Your bridges are powerful.

Satan knows how powerful bridges are between one generation of believers to another. He knows that if he lets your generational bridges stay standing, he will lose the war that he has waged upon your children.

What’s one of the first things they do in a war? That’s right, they blow up the bridges. Without a bridge it creates isolation and it stops vital supplies getting to the soldiers.

Paul Scanlon wrote a book called, Battle for the Loins. It talks about generational bridges. First, second and third generation of believers.

My parents are first generation believers, I’m the second generation and my children are the third generation.

That’s 3 bridges that had the potential to be destroyed by the enemy.

Satan works on your family with his war tactics. He wants to destroy those bridges before they are formed.

If he can stop the next generation in your family from believing in Jesus, then he has taken back ground that you have worked so hard for.

Don’t let Satan take the bridge you have built brick by brick.

A strong bridge is not so easily destroyed by the enemy.

I’m always thinking about the next generation. It’s just the way I’m wired.

I ask myself regularly.

I’m so grateful that even though my kids are much older now, they still love going to Church and most importantly, they love serving in the House of God.

I have put my trust in God and built my generational bridge brick by brick.

But protecting the bridge for my children hasn’t happened by chance.

It’s been a lot of fervent, gut wrenching, on –my-knees, tear stained-panda- eyes type of prayers.

I have given them the space and the freedom to figure out their own walk with God.

No one can live off the coat tails of someone else’s faith.

I didn’t want them thinking that God was some kind of dust-laden trophy that I got out of the cupboard every Sunday. Polishing him up until He gleamed and shone for the hour and half of a Church service.

I needed to make God irresistible to them.

I wanted my children to discover the God I have grown to love with no strings attached.

It’s scary to give them the freedom and space to find their own path because they may decide not to continue with their faith, which can be heart breaking for a believing parent.

WHEN THE BRIDGE CRUMBLES.

It’s hard when you’ve brought your children up in a Christian home, prayed for them and then watched that bridge you’ve built crumble and fall as the enemy pushes down the lever on his explosives.

I feel the heartache for my friends whose children don’t believe anymore.

Protecting the bridge for my children hasn’t happened by chance. It’s been a lot of fervent, gut wrenching, on my knees, tear- stained-panda- eyes type of prayers.

We are in a war, my friends.

And the enemy who wants your children is relentless.

He doesn’t have an ounce of compassion or pity for them.

He doesn’t play fair. And as far as the enemy is concerned, the quicker that generational bridge you’re trying to build is destroyed, the better.

But you’re saying, ‘I did the gut wrenching, on-my-knees kind of prayer and now my are grown, they don’t believe.’

The enemy will have you believe that lie with his deception tactics. He whispers that it’s too late for them. The bridge is gone, so just give up.

He can take the rubble and dust that was once a bridge and build a stronger, better bridge than before.

So keep praying those gut wrenching, on your knees, tear-stained-panda- eyed prayers for your children.

And watch God build connection and a safe passage for the next generation of your family.