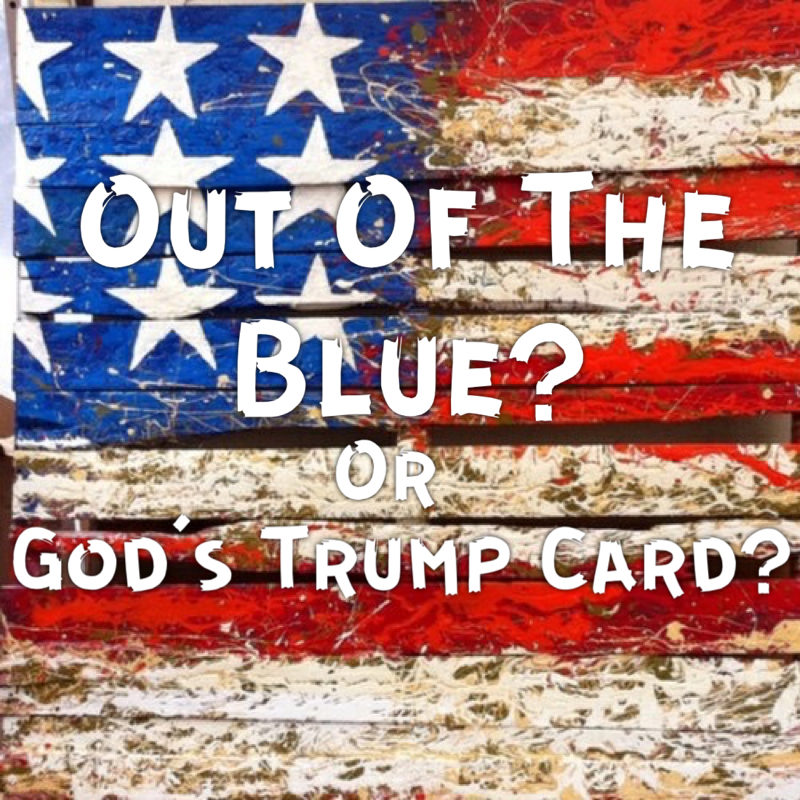 Out Of The Blue Or God’s Trump Card?

As we all sat glued to our T.V. sets on November 9th to watch the American Presidential Election result, the mood turned from surprise, to shock and then into disbelief.

The saying, ‘like a bull in a china shop’ came to mind, when I observed the look of panic on people’s faces, as the realisation that Donald Trump was going to be the next American President.

And I liked the red tie that Donald Trump was wearing for his victory speech.

And the blue tie that Mike Pence was wearing for Trump’s victory speech.

And the white tie that Barron Trump (youngest son)  was wearing for his dad’s victory speech.

OUT OF THE BLUE?

I am in no way an expert on politics, but the normal, “It looks like rain again,” conversation starter has now turned into, “So, what do you think about Trump becoming the next President?”

Did Americans feel it was ‘out with the blue’ (Democrats colour) rather than the result being out of the blue?

But one thing’s for sure.

I keep reminding people that God is still the head honcho and nothing surprises Him.

I’m quite sure God isn’t sitting up in Heaven right now, feeling all depressed.

He isn’t watching Gilmore Girls re – runs on Netflix, while spooning huge amounts of Ben & Jerry’s ice cream into his mouth saying, “Good grief Gabriel, I never saw that coming!”

Maybe this is God’s trump card?

Because He’s very good at turning tables and shouting, “Plot Twist!” when we think we’ve got the story all figured out.

He is still top dog, the big cheese and the boss of everything.

But some have forgotten.

They have let the worries of this world cloud their thinking.

“So –  who is like Me? Who holds a candle to Me?” says The Holy. Look at the night skies: Who do you think made all this? Who marches this army of stars out each night, counts them off, calls each by name – so magnificent! So powerful! – and never overlooks a single one. (Isaiah 40:25-26) The Message Bible.

No matter who is President.

He is the same yesterday, today and forever! (Hebrews 13:8)

We are still God’s people.

And we need to be that lighthouse to the nations and to start bringing people into the open and into the light. (Isaiah 42:7) The Message Bible.

So what are you waiting for?

Start the, “So, what do you think of Trump becoming the next President?” conversation.

And calm their fears by saying,

“Meh, Donald Trump maybe the next President –  but My God is still King.”