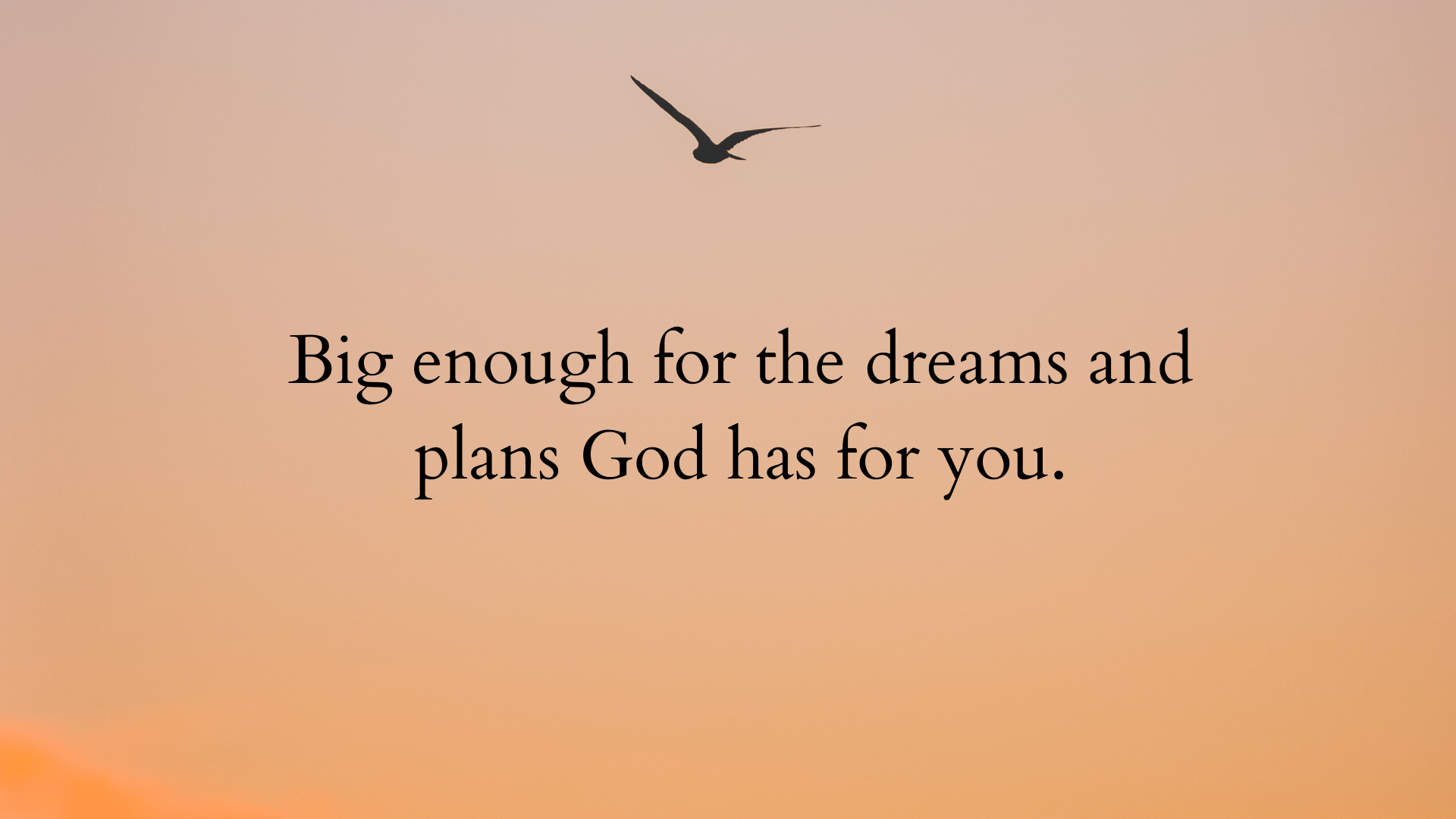 Big Enough For The Dreams And Plans God Has For You.

Do you believe that you’re big enough for the dreams and plans God had for you? And what does “big enough” mean anyway? Potentially, I didn’t have a blog post this week due to my insufficient, meagre words. It just felt like they had all been written before. I’m not the kind of writer who’ll serve you up a plate of reheated, writing leftovers, hoping that they still have the same power-packed nutritional value that nourished your soul as before. However, after two cups of tea, a blueberry muffin, and a cup of coffee, the curser still blinked mockingly at me on my blank computer screen.

I decided that I needed something to get me out of this void of writing nothingness and so I started to read some of my old notebooks. As I was reading, I came across words that my friend said to me while we were at a leader retreat back in 2011. She said, “You are big enough for the dreams and plans God has for you.”

And there it was.

God knew how overwhelmed I was in trying to get every word right. Trying to force my square thoughts into the round holes of a blog post, making me feel like I wasn’t good enough to live up to the expectation of my readers, that I wasn’t worthy enough to give myself the title of, “author”. And as I read the words again and again in my notebook, “You are big enough for the dreams and plans God has for you” I knew I needed to give up and give in to my striving and just let the Holy Spirit lead me to the right words.

Whatever dreams and plans God has placed in your heart, dear friend, know that you’re big enough to fulfil them. Fear whispers that you’re just too small for the task, too insignificant to make a difference. Insecurities tell you that you don’t have the right words, or the right education, or the right postcode, or the right hair colour, or the right ………. (you fill in the blank) to do what God has called you to do. And when the enemy brings his arsenal of weaponry to rob you of your dreams, you’ll be reminded of this blog post and have the confidence and courage to see those God-sized plans come to pass.

I’ll share a revelation I had about fulfilling God-sized dreams. Our enemy isn’t too worried about all the dreams and plans God has for you. Honestly, he’s not. He’s much more concerned with taking a little thing called, “potential”. Because Satan knows your potential is what calls out the greatness that’s already on the inside of you.

The definition of the word ‘potential’ according to Merriam-Webster’s dictionary is, ‘the chance or possibility that something will develop and become real.’ Sometimes we’re so busy focusing on the dreams and plans that are in the future, we don’t see the enemy come alongside us and steal our potential right from under our noses. If there’s a chance that the dream God gave you will develop into something real, then as far as Satan is concerned, your potential needs to be poached, plundered, and pilfered before it does any future damage to his dark kingdom.

Over and over again we read about the great heroes of the faith who were big enough to fulfil the dreams and plans God had for them. And yet, they still battled with the insecurity of low self-esteem when God first revealed the greatness that was locked on the inside of them.

“Who am I to confront Pharoah and lead Israel’s children out of Egypt?” [Exodus 3:11]

“But Lord, how am I supposed to deliver Israel? My family is the weakest in the tribe of Manasseh, and I am the least of my family.” [Judges 6:15]

“Ah, Eternal Lord! I’m too young and inexperienced to speak for You.” [Jeremiah 1:6]

Potential robbing statements by these Bible heroes that would have been where the enemy’s heist took place if they didn’t wise up. Their low self-esteem needed to be addressed because they had to believe they were big enough to fulfil the calling in their lives. If we’re going to live out God’s dreams and plans, like the Bible heroes we have to start believing in ourselves and believing what God sees in us is who we truly are.

Do you believe that you have enough potential rattling around in your dreams to fulfil the plans God has for you even though you cannot see the next step in the journey?

Your potential trusts God when He tells you that you’re big enough and reminds you who you are. Potential calls to you when every bone in your body cannot carry on. Potential forces you to keep going when you feel like giving up and giving in. Potential is the greatness that God sees in you before anyone else does.

Of course, this knowledge doesn’t give us a ticket to go on an ego trip, letting people know how special we are. God is helping us to see that it’s our potential the enemy wants because potential is the “big enough” to tackle our God-given dreams and plans head-on.

So, the next time Satan comes sniffing around your potential, especially when you feel like you’ve failed or you don’t measure up, or you’re too insignificant in fulfilling the dreams and plans God has for you, you just tell him you’ve had a bellyful of his lies and remind him that you are ‘seated in Christ in heavenly places!’ [Ephesians 2:6]

Where have you seen Satan try to rob you of your potential which stops you from seeing the greatness already on the inside of you?

I pray today, that you’ll be wise to the enemy’s schemes about your potential and have a deep sense that when God says that you’re big enough to fulfil the calling upon your life, you’ll believe it and live it out!