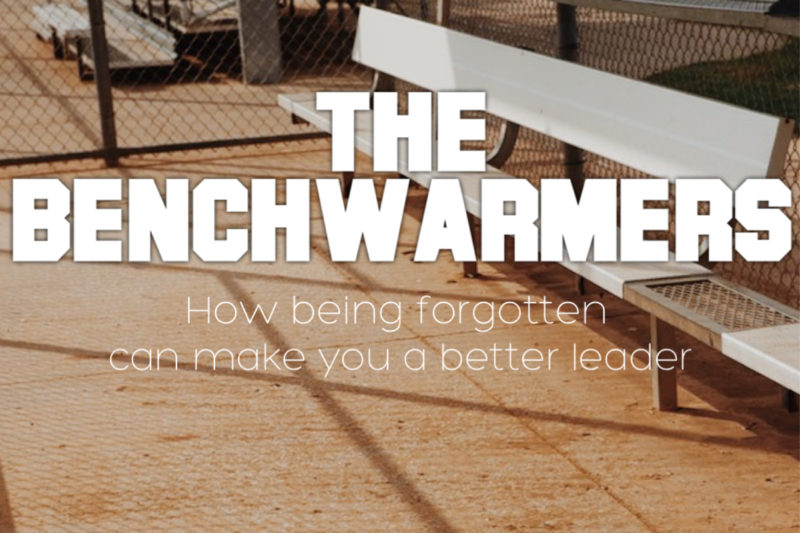 The Benchwarmers (How being forgotten can make you a better leader)

Well this week’s blog is just for you, my friend

Being a leader can be challenging at times

Especially when you feel forgotten by others

In school, I wasn’t what you’d call ‘sporty’

When it was time to pick teams, I usually ended up one of the last to be chosen

I’m convinced to this day, if a three legged, one eyed, deaf dog had wondered onto our high school sports field, answering to the name of Lucky…

…They would have picked the dog for the team, instead of me

So, you’re a leader?

You are in good company

HOW BEING FORGOTTEN CAN MAKE YOU A BETTER LEADER

We find Joseph sitting in prison…waiting

Pharaoh’s chief cupbearer and chief baker had offended Pharaoh, so he threw them into prison

Now it just so happened that it was the same prison Joseph was in. He was serving time for a crime he hadn’t committed

Joseph was put in charge of these men

So, Joseph helped them by telling them what their dreams were about

Even though Joseph’s circumstances weren’t ideal, he was still put in charge of people

Know this, that no matter where you find yourself in life, if God has anointed you as a leader it doesn’t matter what your circumstances look like, you are still a leader

True leaders don’t need fancy titles to be a leader

They just lead from whatever circumstances they find themselves in

Before Joseph saw his dream that he’s carried in his heart for years come to true, he needed to help other people with their dreams first

Even when you are a benchwarmer, you can still encourage and help others with their dreams

Back to the story…

Pharaoh decided to release his chief cupbearer and chief baker from prison, because it was his birthday

What a nice Pharaoh. Happy Birthday ruler of Egypt

As they were packing suitcases, ready to leave their damp, dark cells, Joseph hoped that they would remember what he’d done for them and put in a good word to Pharaoh about releasing him also

He had truly become a benchwarmer by this time

His God dream left in tatters

Until Pharaoh started having dreams and needed them interpreted

It was only then that the chief cupbearer finally remembered Joseph!

Joseph told Pharaoh what the meaning of his dream was

God will elevate you at the right time

The thing about God is that He’s super big on character, rather than title’s when it comes to leading well

He doesn’t even need great leaders

So, if you’ve been called to leadership but you feel like a benchwarmer

God is working on your character

And He has something for you that will truly