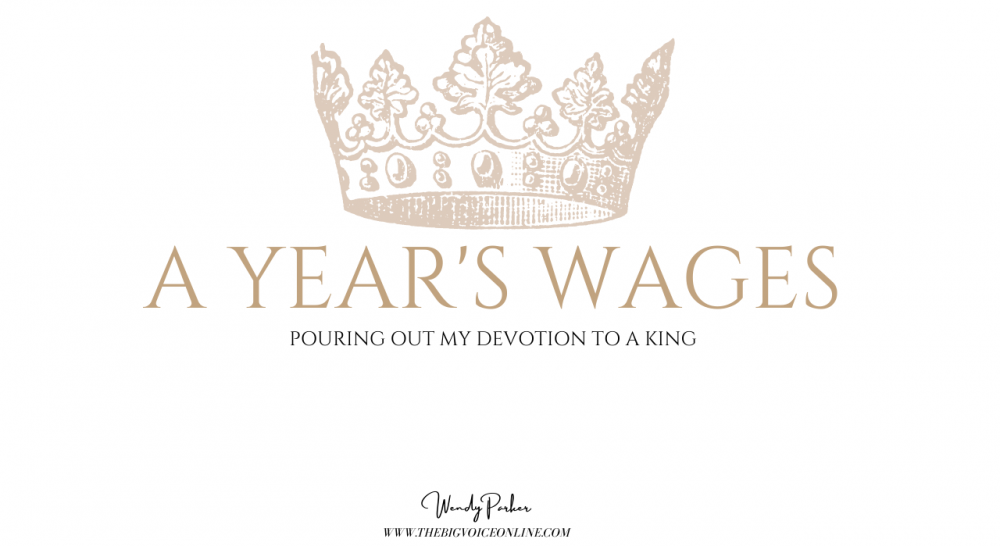 A Year’s Wages: Pouring Out My Devotion To A King.

Can you imagine if you watched a news report about a woman who owned a bottle of perfume that was worth a year’s wages, then she decided to take that expensive bottle of perfume, walk into someone’s house, find a man, bow down in front of him, open the perfume bottle and pour it all over the man’s feet, then wipe his feet with her hair? What would be the first thought that came to your mind? I think most of us would think the act was foolishness, wondering why on earth a woman would do such a thing? But some of us would want to know what made this man so special, and why the woman was so smitten by him? Because to willingly pour out a year’s wages on someone’s feet, well, that’s not just love, that’s next level passionate devotion.

In Matthew chapter 26 there is a woman who did exactly what I’ve just described. “A woman came into the house, holding an alabaster flask filled with fragrant and expensive oil. She walked right up to Jesus and in a lavish gesture of devotion, she poured out the costly oil, and it cascaded over his head as he was at the table’ (verse 6-7 TPT) I can imagine the look of horror on each of the disciples faces as they all watched on, disapproving of this women’s behaviour that caused them to vocalise their disgust in hidden whispers and raised eyebrows between each of them. What did she think she was doing? This ridiculous act of wasting a year’s wages over Jesus was not right! “What a total waste!” they grumbled. “We could have sold it for a great deal of money and given it to the poor.” (verse 8)

It’s been almost 12 months since leaving my day job so I could concentrate on the calling that’s been on my life since the age of fifteen. And at times I’ve felt just like that women when the inevitable question comes up in conversations, “so, what do you do for work?” and I tell them that God made a way for me to leave my full-time paid job last year during a pandemic, so I could go to the full-time unpaid job of writing. I can feel them squirm slightly as I watch them struggle to process this piece of information. And as they wrestle with the unspoken words of their disapproving and judgmental thoughts, keeping them locked in their mouth rather than saying them out loud, I know what they are thinking, “That’s ridiculous! What a total waste!”

Being brave and stepping into your calling isn’t always easy, it’s a hustle, and there will be uncomfortable moments and times of uncertainty as you press into what God has placed in the core of your soul. Believe me, when I tell you, it has taken years for me to get to this point. Our family was poor for many years and I have worked many jobs that were not my calling just so my family could eat. But over that time, I found a new passion for Jesus, who has always provided for me and my family regardless of our circumstances. As I re-read the story of the woman who poured out a year’s wages to anoint Jesus, I felt God say in my spirit, “You have sacrificed a year’s wages for Me too.”

Don’t worry if you’ve done something that people do not approve of. Jesus hears those demeaning, belittling, disapproving whispers from the people who talk about you behind your back. And He reminds us in this story in Matthew chapter 26 that this kind of devotion is a beautiful act of kindness. If like me, you have bravely stepped into what God has called you to do, then keep going. My year’s wages of sacrifice, my fragrant oil poured over Jesus’ head and feet have opened up opportunities that may have been missed if I’d have ignored God’s prompts to leave my day job.

Now, I’m not saying to be stupid and just quit your job and live on hope and a prayer. I can only do what I’m doing because God has made a way for me. It was all in the timing, and many hours of prayer, communion taking, and seeking God’s will for my life that have helped me to finally step into my calling. Things are happening and opportunities have opened up in the past 12 months in my writing endeavours. However, it’s been a slow process. And God honours our devotion, not our stupidity. There is no glory offered to Him if we make unwise choices when it comes to our calling. I struggled to trust God to provide for my family on the one wage that was my husband’s when I first left my day job, but now I willingly take my fragrant and expensive oil to the house where Jesus stays and pour out my year’s wages over His head as a lavish gesture of devotion.

So, my encouragement to you, dear friend, is to remember that if we are faithful in the little things, God will pave the way for greater responsibilities (Luke 16:10). And when people think that pouring out a sacrifice of a year’s wages over Jesus is a total waste, then they haven’t understood that they are in the presence of a King who willingly poured out Himself for our salvation first.

What sacrifices have you had to make that look ridiculous to everyone else, but God has prompted you to follow your calling?