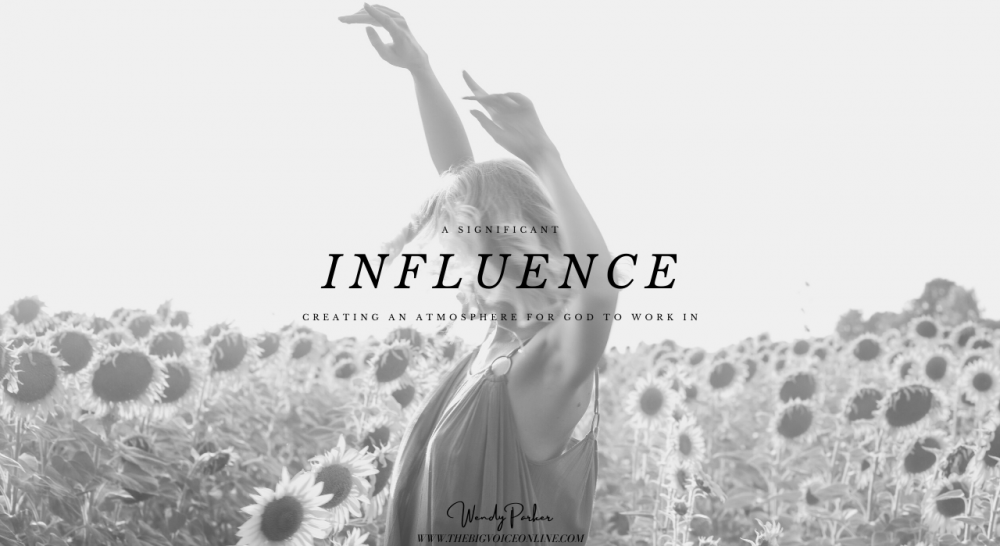 A Significant Influence – Creating An Atmosphere For God To Work In.

Whether you clean apartments, sell cars, or sweep roads for a living, you have significant influence and you can create an atmosphere for God to work in. Believe it or not, God is not looking for people with star quality and the biggest following on Instagram. He seeks out the willing heart who just wants to shine His light in whatever circumstance they find themselves in. Creating an atmosphere for God to work in starts with you. Yes, YOU. I can hear your excuses from my laptop right now as I’m writing these words. Don’t discredit yourself, you have significant influence and I’m about to tell you why…

If you’ve been a believer for a while, you’ve no doubt had a few scuffles with the enemy that has left you with a couple of scars. If not, then I suggest you check which way you’re heading because as the saying goes, “If you haven’t run head-on into Satan, it’s probably because you’re both going in the same direction.” Wise words indeed. However, if you’re wanting to become a disciple who grows deeper with their relationship with God and has plans to make a difference in this world, you need to understand that Satan will steal your influence first before he even attempts to rob you of your salvation.

In Neil Cole’s book, ‘Ordinary Hero’ he talks about how some books of the Bible were written in prison. He says, “Some books of the Bible were written from palaces like the Vatican, but not as many as were written from dungeons and on the run in the wilderness with a posse breathing down the author’s neck.” Paul the apostle wrote some of his letters while in prison. Known as the prison epistles, (Colossians, Ephesians, Philemon and Philippians) Paul understood that he had significant influence in the spiritual realm even though he was imprisoned and confined to the walls that surrounded him in the natural realm. Paul created an atmosphere for God to work in by not looking at his circumstances but by believing in his influence.

Even though Paul wrote those letters to the church thousands of years ago, his influence in those writings is still very significant today. You need to understand something, dear friend. Satan wants to steal your influence and stop you from creating an atmosphere for God to work in. He’s not worried about you getting to heaven, it’s all the people that have been influenced by your faith that are coming along with you!

Over the history of Christianity, Satan has persecuted the church and tried to stop the gospel from being spread. But to no avail. He is well aware (even if you’re not) that once you know your identity in Christ, you’re dangerous. He’ll feed you the lie that significant influence is just for preachers on church platforms, not average everyday Christians like yourself.

However, your significant influence far outweighs the limited power that he tries to wield over you. Satan is as crafty as he is cunning, and his goal is to keep your influence small and contained. He’ll whisper that your efforts in living a faith-filled life and sharing your faith with others are doomed to fail, and you’ll get laughed at for being too radical and too weird, so don’t even bother creating an atmosphere of faith for God to work in because no one wants to know.

So, now you know that you have significant influence regardless of whatever circumstance you find yourself in, how do you create an atmosphere for God to work in? Paul writes in Ephesians 3:7 that, ‘I have been made a messenger of this wonderful news by the gift of grace that works through me. Even though I am the least significant of all his holy believers, this grace-gift was imparted when the manifestation of his power came upon me.’

Before reading this post, did you think you had a significant influence?

How could you create an atmosphere for God to work in throughout your day?