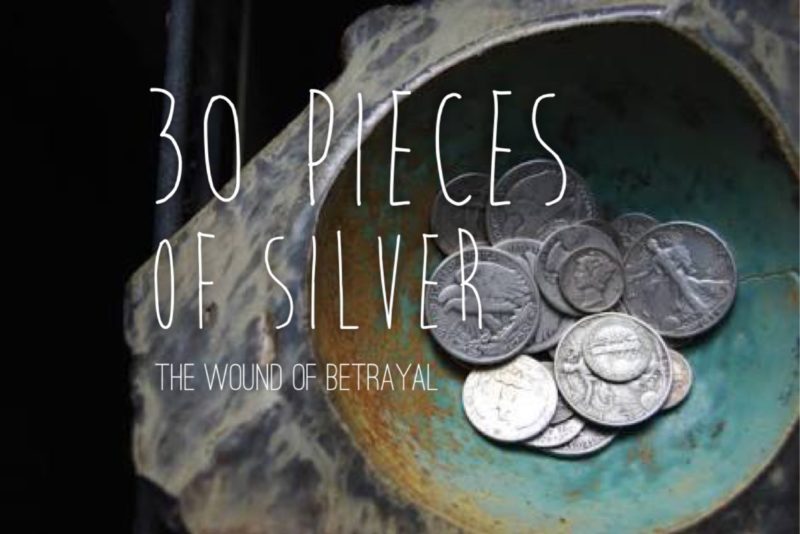 30 Pieces Of Silver – The Wound Of Betrayal

What words did you think of when you read that name?

Luke chapter 22:48 is the moment where Judas gave Jesus the ‘kiss of betrayal’

30 pieces of silver was all it took

To persuade a disciple to betray his friend

Greed is the shadow which betrayal stands in

30 pieces of silver was a fair price

To sell Jesus over to the chief priests

In the end, it was himself that he sold

THE WOUND OF BETRAYAL

Every time I read Luke 22, I feel the ache in Jesus’ heart

Like Jesus, I too have felt the sting of betrayal by a close friend

Betrayal in its rawest state, is like a knife wound

It cuts deep, and you never think you’ll get over it

Over time it heals, until a scab is formed

But the wound of betrayal is still visible

And if picked, it can fester

Until its toxic poison oozes into every part of your life

The betrayer has long since gone, but your still face down, in the dirt

While the false accusations were being hurled at me

Hoping that my integrity rose above the darkness that surrounded me

Trusting God to fight for me

As I’ve walked through the emotions that go with betrayal

The sense of loss of the relationship, sadness and disappointment

I have come to realise

That it’s in those moments, that you must truly lean on God to pull you through

But like Judas, they too have sold themselves for 30 pieces of silver

At the climax of the crucifixion story

Judas and Jesus are both hanging on a tree

…But one man rises

One man looks at his accusers and betrayers and says,

“Father, forgive them; they don’t know what they’re doing”

It’s a word that will make you catch your breath

Like an antiseptic lotion, stinging the wound that betrayal has left

But God wants you to rise, dear friend

I won’t lie to you, it’s a long process

Which feels unfair at times

But there is hope

Because Jesus has the power to slowly heal your wounded heart

Back to a place where you feel secure in His love

It will be in that moment, that you will realise just how much you’ve grown

And you will start to rise again

He’s got your back