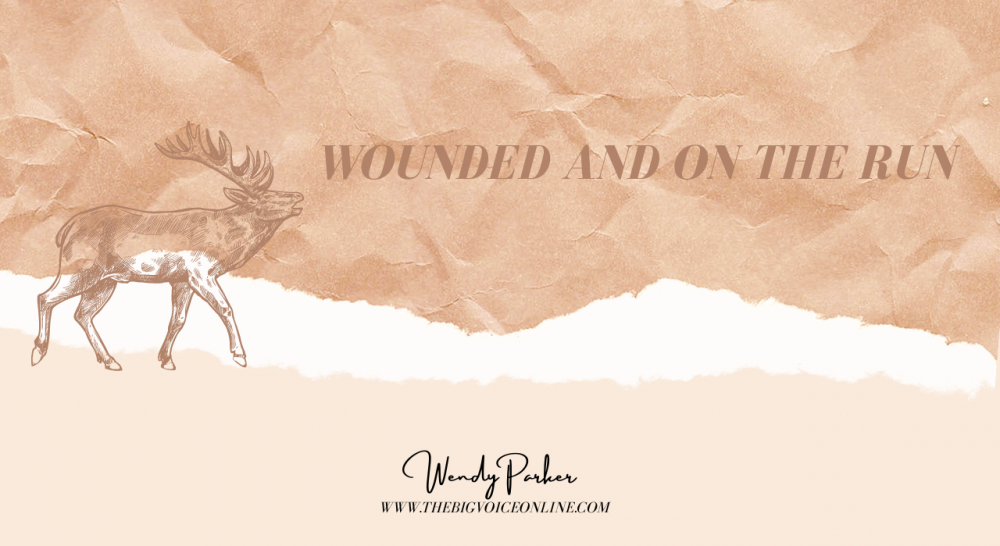 Wounded And On The Run

Did you know that elks have an amazing ability to cover many miles of rugged terrain when they are wounded? Hunters use this to their advantage and track an elk they have wounded by blood trailing them. As the hunter follows the wounded elk, they can tell where the bullet or arrow they have fired has penetrated the animal. Whether it’s near the lung or the heart, this knowledge helps the hunter determine how he is going to track down the elk.

The purpose of blood trailing is about the chase. Hunters are prepared to go to a lot of effort to track a wounded elk, shoot it, and carry the prize home with them. Through studying wounded elk’s, blood trailing and how a hunter tracks these majestic animals, I realized, like the elk, I had been wounded by a hunter and had run. Covering many miles of terrain, from the highest mountain peaks right down to the deepest, darkest valleys, I had run for many miles. The hunter, who is Satan, had tracked me for almost thirty years, and as my wounds bled out, leaving a blood trail of brokenness behind me, Satan lined up his scope and kept loading his weapon of choice.

Most hunters will leave empty-handed having nothing to show for their efforts. However, Satan is a hunter who is relentless in his pursuit. So, why does Satan go to all this effort to keep us running from God? Why does he enjoy the chase so much? Because you, my dear friend, are a prize worth having. The hunter has worked very hard to make sure that those wounds from every betrayal, every offense, and every disappointment you’ve experienced over your life are never going to heal.  Believe me, some of the shots the enemy fired at me over the years came very close to being fatal, and I’m sure you’ve had a few close calls of your own with the hunter. However, Satan knows better than to finish the chase quickly and take you out of the game. Better to have you wounded and on the run, making the hunt more exciting and thrilling as he draws ever close to what he’s wanted all along, to finish you off and mount your head upon his already heavily decorated trophy wall.

Satan isn’t shy in using people to wound. In fact, most of my wounding came from inside the church, not outside of it, and it has been a process for those wounds to finally turn into scars. We shouldn’t hide our scars because scars are good. They let people know you’ve been through something and come out the other side of it. If you want those bleeding, festering wounds of yours to be healed and turned into scars, I’ll give you some advice. You need to let Jesus look at them so they can heal. I have to admit I was ashamed and fearful at first for Jesus to take a look at my wounds. However, this is what the hunter wants. He is just metres away firing the fatal shot, and your reluctance by not letting Jesus take a look at those wounds is giving the hunter a chance to line up his scope and pull the trigger once again.

You’re not the first person to hide away from God because of wounds that have been inflicted on you. In Genesis 3: 9-10, God calls out to Adam and asks where he is. Adam’s reply was this, “I heard Your voice in the garden, and I was afraid because I was naked, and hid myself.” [NKJV] Adam and Eve suddenly felt naked after their encounter with the serpent and were now scared of God’s reaction, so they hid among the trees. Listen to me, dear friend. God, isn’t going to scold you for something you did, or something that was done to you. He just wants to take a look at those wounds so He can help you.

I think we forget that Jesus was wounded long before we felt the sting of rejection, betrayal, or disappointment in our lives. ‘Yet it was our suffering he carried, our pain and distress, our sick-to-the-soul-ness. We just figured that God had rejected him, that God was the reason he hurt so badly. But he was hurt because of us; he suffered so. Our wrongdoing wounded and crushed him. He endured the breaking that made us whole. The injuries he suffered became our healing.’ [Isaiah 53:4-5 TVT]

Did you catch that? Jesus endured the breaking so we could become whole. Through His suffering, humiliation, and crushing we became whole again. But you have to be willing to let Him look at your wounds so He can heal you. I know, it already sounds like a painful process to go through, but you can’t keep running, my friend. The hunter of your soul isn’t far behind and he is already reloading his weapon. Jesus is wanting to set you free from running. He leaves the ninety-nine to look for the one. The Father is standing by the gate, scanning the horizon looking and waiting for the prodigal to return home again. He wants to dress your wounds and make you whole again. But you have to let Him look at your wounds first. You have to stop running long enough so Jesus can touch your heart.

How close has the hunter, Satan, came to mounting your head on his heavy-decorated trophy wall through wounding?