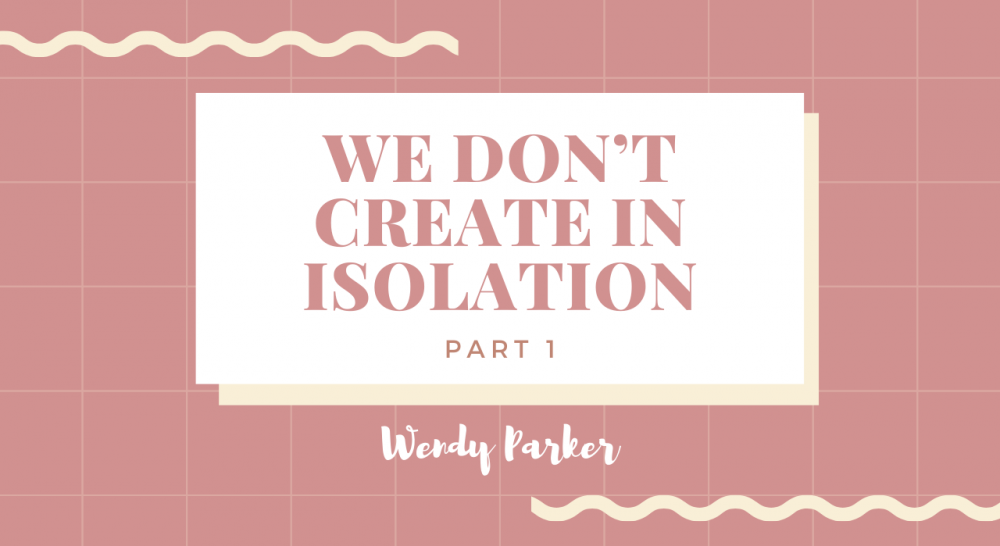 We Don’t Create In Isolation – Part 1

There is something mysterious about the art of creating. The project you embark on goes from a wisp of a thought that’s been sitting in the deep caverns of your mind, to a tangible idea which takes shape and forms into something so other people can touch, taste, see, hear, read and admire it. It’s quite remarkable when you stop and think about it. The whole process of creating something from start to finish is truly amazing. However, we don’t create in isolation. No artisan can go from an idea to something created without some input from another source.

C. S. Lewis, J. R. R. Tolkien, Steve Jobs, Albert Einstein didn’t isolate themselves from everyone while they came up with their ideas. They didn’t sit on a desert island, staring at the sea while drinking coconut juice all day as they started the process of creating things. No, they did life and created something out of that. They looked for inspiration wherever they went and in the conversations they had with other like-minded people. We don’t create in isolation because we were not meant to create things isolated from everyone else.

Genesis 3:18 says, ‘It’s not good for the man to be alone, so I will create a companion for him, a perfectly suited partner.’  Notice that? God created a companion for the man. God filled the void of isolation and gave man, Eve. She would join Adam, and together, side by side they would continue the on-going work of creation. We don’t create in isolation because God didn’t create the universe in isolation either. If we go back a couple of chapters in Genesis 1:2 it says that, ‘At first the earth lacked shape and was totally empty, and a dark fog draped over the deep while God’s spirit-wind hovered over the surface of the empty waters.’ In the Message Bible the same passage says, ‘God’s Spirit brooded like a bird above the watery abyss.’  The Holy Spirit was right there from creation’s beginning.

I’ve always seen the Holy Spirit as the creative part of the Trinity. Just imagine, in the beginning, God is looking at that totally empty, void space…thinking. Then he leans in and whispers in the Holy Spirit’s ear, “I’ve got a magnificent idea…” Of course, he had to whisper it otherwise if God had spoken His ideas any louder they would have come into existence before the Holy Spirit could calibrate and input all His creative genius, just like one of those designers on a home renovation show. Creation needed an artisan to blend a certain hue or tone in different areas, a splash of colour here and there, with hard lines and soft edges that blend together in a tapestry of elegance. Everything had to look absolutely fabulous darling! *Flicks hair*

What blows my mind is that we are created in the image of the Trinity. When they finally put the finishes touches to the cosmos. When everything was in place and it looked good the Trinity decided that they needed to create something else, something to enjoy their creation. So, they created you and me.  God said in Genesis 1:26, “Now let Us conceive a new creation – humanity – made in Our image, fashioned according to Our likeness.” I love that. God didn’t create us on His own in isolation, He collaborated with the Trinity, He fashioned you and me perfectly. The Trinity bestowed upon us unlimited creative potential that is mind-blowing. We are uniquely designed to create things in the unfolding, ongoing story that’s within God’s creation.

If we are to carve out a new path, a new way of how we are going to create within this season, we have to draw on the deep well that is within our souls before COVID hit. We have to join life and use this space and time that we’ve been given to start to create things once again. Yes, we’ve been in isolation for a while now, but during that time things have been birthed. Forgotten dreams  have been awakened and aroused again during this season of lockdown. As artisans, we hold the keys to a new future that we can create and we don’t need to do it on our own. God is leaning over His beautifully carved oak balcony in heaven, that is decorated with soft pink peonies, exquisite white roses and lush greenery, and He’s excited to what you’ll imagine, create and explore in this chapter of the unfolding story of creation. He’s leaning over heaven’s beautiful balcony and He’s whispering to you, “Let’s collaborate and create something magnificent together.”