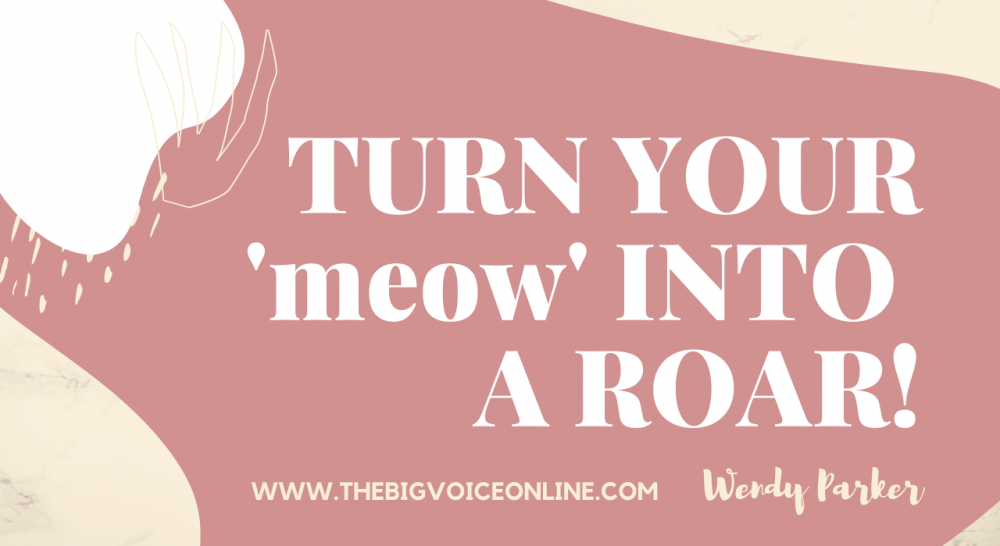 Turn your ‘meow’ into a ROAR!

The opening sequence of the 1980’s cartoon He – Man and the Masters of the Universe is where He – Man points his magic sword at his cowardly pet tiger, Cringer, transforming him from a ‘fraidy cat into a brave armoured tiger named Battle Cat.

Perhaps like me, you’ve been more Cringer than Battle Cat over the years, and you’ve been waiting for quite some time now for He-Man to point his sword at you and say, “By the power of Grey Skull.” Transforming you into the warrior you were destined to be. But He-Man isn’t going to come because the power actually lies within you, my friend and not He-Man’s magic sword.

So, here’s the deal. I want to help you turn that ‘meow’ into a ROAR!

In this blog post I’m going to bring out that inner tiger that’s been sleeping within you and teach you how to;

If you want to turn your ‘meow’ into a ROAR, you need to know that your enemy has sedated you for a long time. You’ve had that dart in your back for a while, maybe even years. As the effects of the sedative begin to wear off, you look around at your surroundings. As your blurred vision starts to focus you realize that the small object lying on the ground next to you is indeed a tranquilizer dart. You feel your neck where the leather collar that was attached to a heavy chain has been removed. You then feel grass under your feet and hear the breeze blowing through the trees. You feel the sense of freedom that you have longed for.

However, you’re scared. You don’t know how to behave in this new environment because you’re not sure what to do. You’re used to playing the pussycat, hiding behind ‘fine’ and ‘good,’ playing by the rules. Driven by the fear of rejection which turned you into a people pleaser. You have laboured long and hard to tame your roar into a meow just so you could fit in. You wonder if a tiger really belongs in this place.

Maybe you have stumbled across my website by accident. However, I don’t believe in accident’s or coincidences. God has orchestrated our time together, and I’m glad that you’re here because I need you to know something. The enemy of your soul does not play fair. For years he has made sure that you have been held captive and sedated so you never become awakened to your true identity. It says in John 10:10 that, ‘A thief is only there to steal and kill and destroy.’ That’s what Satan is, a thief. He has stolen your confidence, courage and boldness from you. But there is hope because it says in the next part of John 10:10 that, ‘I came so they can have real and eternal life, more and better life than they ever dreamed of.’

The ‘I’ is Jesus and He is the one who has pulled that tranquilizer dart out of you, took the restricting collar from around your neck, placed you in an environment where you can awaken the tiger within you and told you there is a better life waiting for you, more than you’ve ever dreamed of! The enemy of your soul has sedated you for a long time; do you really think he will let you go so easily? Deep in the thick scrub he waits and watches you. Now that his deception has been uncovered, he will try to intimidate you and render you weak and defenceless my friend. But his tactics won’t work as well as they used to because you are no longer known as He – Man’s pet tiger, Cringer. The power is within you, ‘O awakened one and your new name is Battle Cat!

Do you know how tigers communicate? They ROAR! This is your warning signal that is going to let Satan know that you are taking back your confidence, courage and boldness that he stole from you. You are no longer ‘Cringer’ the ‘fraidy cat’ you’re now an armour wearing Battle Cat! Hoorah! But FIRST you need to know who your REAL enemy is and how he operates because you don’t want to waste precious time roaring at the wrong enemy! The reason you don’t know who your real enemy is because you’ve been looking for the wrong suit. Since you’ve woken up from the tranquilizer dart that your enemy shot into you, you’re slowly making your way through the thick, dense forest towards the battlefield. You are acutely aware that at any moment the enemy could attack you. So now you’re looking for someone in a red Lycra suit resembling a 1980’s workout instructor, except he’s holding a pitchfork instead of wearing pastel coloured leg warmers.

Hmmm, not quite. But I can image Satan wearing a suit, a tailored suit, one a prosecution lawyer would wear. In Revelation 12:10 it says, ‘For the accuser of our brothers, who accuses them before our God day and night.’ Can you just imagine Satan standing in the Heavenly courtroom reading out a very long list to God of what you’ve done wrong? And if that doesn’t knock the wind out of your sails, he coats the back of those accusation notelets with thick glue called FEAR – just so they stick.

Once he’s hoodwinked you into wearing your false identity, it’s just a hop, skip and a jump to obtaining your destiny. It turns that great ROAR you’ve managed to find into a ‘meow’ again, right? I know, I’ve been there. I felt the tentacles of intimidation and fear too. If there’s just one thing you take away from this blog post today, it’s this,

Whenever God asks you to step out in Faith and trust Him, the enemy of your soul will send his hordes of Hell to stop you from reaching the destiny God has planned for you.

(I wrote that super large so you get it)

Verse 11 in Ephesians 6 says that we are to ‘PUT ON’ the whole armour of God so we are able to stand against the wiles of the devil. So, what are wiles? Believe it or not, wiles aren’t small rodent’s you find in the forest. A ‘wile’ means a trick meant to fool, trap or entice. I don’t know about you, but I can smell a rat! Hmmm, sounds like a job for BattleCat, yes? And you can ‘put on’ the whole armour of God quicker than He – Man can shout, “I HAVE THE POWWWEEERRR!!” while he’s waving around his magic sword.

The armour is of NO USE if you don’t wear it.

You need to ‘suit up’ and defend yourself against Satan’s scheming and skullduggery.

So how do you do that? You PRAY IT ON. Because once you’ve prayed on God’s armour your ‘meow’ will become a ROAR! And all of Satan’s dishonest, deceitful, deception will have no lasting effect on you anymore. Just be careful though, Satan is as cunning as he is sly. Remember when He – Man and BattleCat fought for justice over Skeletor and his cronies at Castle Grayskull and afterwards they went back to being just Prince Adam and Cringer – like EVERY time?

Please don’t do that. Please don’t let Satan fire his tranquilizer dart into you again and turn your ROAR back into a ‘meow.’ Or let Satan’s artful trickery twist your thoughts into thinking you have no authority over him.

YOU ARE BATTLECAT.
YOU ARE WIDE AWAKE.
YOU ARE TOTAL AWESOMENESS!!
(Fist pump in the air – POW!)

Can I be frank? Not everyone will get bedazzled about the fact that you’ve just acquired your amazing tiger skills. I’d like to share a quote that I think will help you become that tiger:

“Our deepest fear is not that we are inadequate.
Our deepest fear is that we are powerful beyond measure.
It is our light, not our darkness that most frightens us.
We ask ourselves.
Who am I to be brilliant, gorgeous, talented and fabulous?
Actually, who are you not to be?
You are a Child of God.
Your playing it small does not serve the world.
There’s nothing enlightened about shrinking so that other people won’t feel insecure around you.
We are all meant to shine, as children do.
We were born to manifest the glory of God that is within us.
It’s not just in some of us; it’s in everyone.
And as we let our own light shine, we unconsciously give other people permission to do the same. As we’re liberated from our own fear, our presence automatically liberates others.” – Marianne Williamson.

So, let’s start a tiger revolution by turning your ‘meow’ into a ROAR!

What action are you going to take today to turn your ‘meow’ into a ROAR?