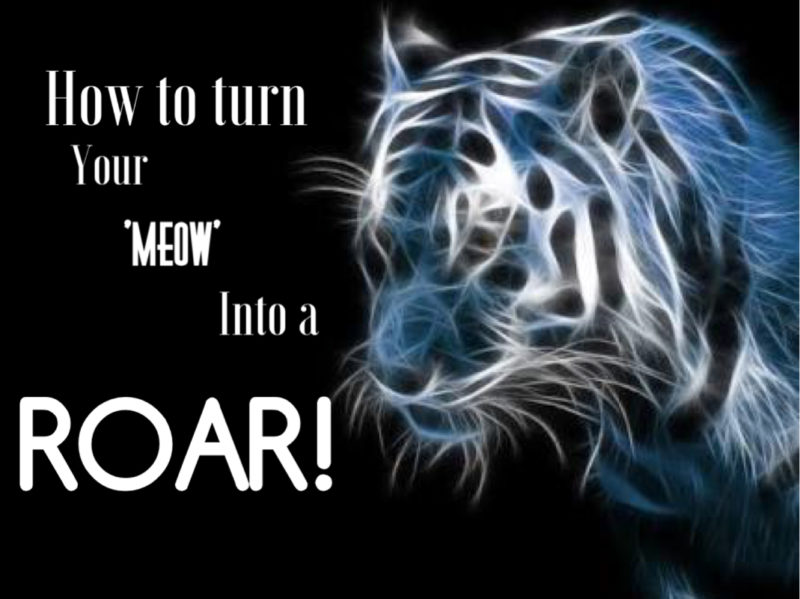 How to turn your ‘meow’ into a ROAR!

I hadn’t planned on wearing it.

It was the last session at a women’s event I was attending with my two friends and I wanted to feel as comfortable as possible. The dark jacket I was wearing mostly concealed the large ‘bling bling’ tiger face on my tee shirt.

At the end of the service the speaker invited us to leave our seats if we wanted to receive a fresh Word for our lives.

I felt ‘the nudge’ from God to leave my seat.

It had become quite warm in the room and so I had decided to take my jacket off.

My ‘bling bling’ tiger on my tee shirt had now come out of hiding.

The speaker moved slowly along the line as she spoke the whisperings of Heaven into every woman’s hungry heart.

Then it was my turn.

“It isn’t a coincidence that you decided to wear that tee shirt,” she said into her microphone to me.

“God is saying that you need to stop meowing like a pussycat and start roaring like a tiger.”

I had the opening sequence of the 1980’s cartoon He – Man and the Masters of the Universe running though my head, when He – Man points his magic sword at his cowardly pet green tiger Cringer, transforming him into a brave armoured tiger named Battle Cat.

And since receiving that Word eight months ago, I have listened to Katy Perry’s Roar song on my headphones more times than I can count, “…And your gonna hear me roar…” (major fist pump in the air!)

So here’s the deal my internet buddies.

I am on a journey of turning my ‘meow’ into a ROAR and I do hope you can join me because if you’ve scrolled down this far I know something has stirred inside of you.

Over the next six weeks I’m going to teach you how to:

First one starts next week, so don’t miss it!!