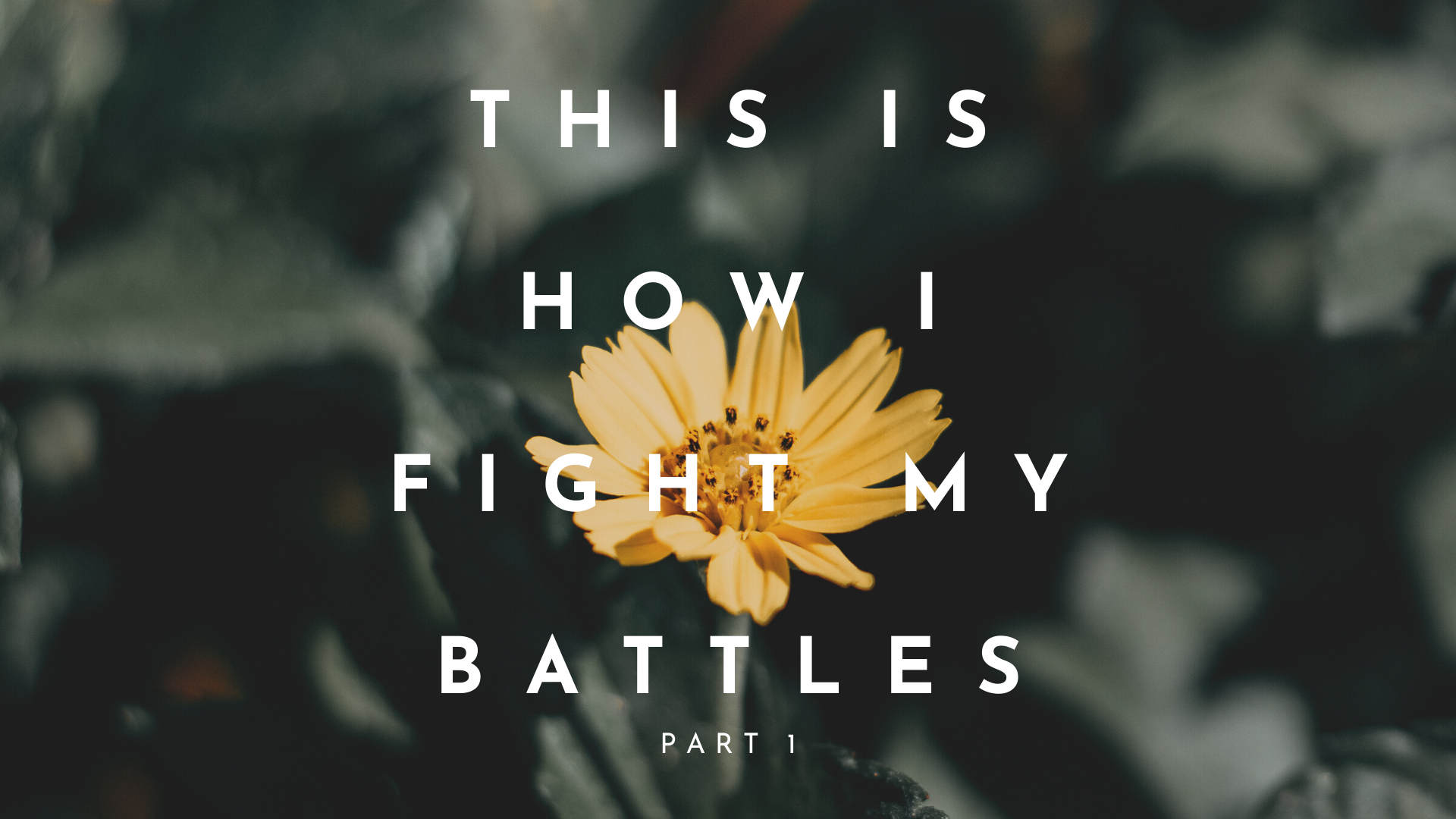 This Is How I Fight My Battles – Part 1

Our struggles, doubts, and burdens always seem so much more magnified in the dead of night, right? It’s in those moments as we lay there in the darkest hour, worrying over stuff that disturbs our sleep that we have two choices. Either we raise the white flag of surrender and stay in the prison cell of fear in the midnight hour, or we raise our battle-scarred hands in worship and shake the foundations with prayer and praise. If you are tired of dragging the chains of fear and worry around with you, then it’s time to look the enemy square in the eye and tell him, “Worship is my weapon, and this is how I fight my battles.”

You perhaps know the song, “Surrounded. (Fight my battles)” or you’ve never heard of it. But amazingly, this song came from a spontaneous worship moment of praise in 2017 in the Dallas, Texas-based UPPER ROOM, from a worship singer named, Elyssa Smith.* It’s a powerful song that declares Jesus surrounds us and His precious blood which was shed on the cross speaks to us as we worship Him.

In Acts chapter 16, we find two singers, Paul, and Silas. Deemed as rebel-rousing troublemakers by the Roman officials, these worshippers have been flogged and are now facing their darkest hour in the most secure part of the prison. The noises the other prisoners heard from Paul and Silas were not from their moaning and groaning, even though they had been flogged within an inch of their lives. They were using worship as a weapon to push back the darkness, raising their black and blue arms in victory instead of defeat and surrendering to their circumstances. With hearts full of courage and hands lifted high, they knew that this was how they needed to fight their battles.

‘The jailer was ordered to keep them under the strictest supervision. The jailer complied, first restraining them in ankle chains, then locking them in the most secure cell in the centre of the jail. Picture this: It’s midnight. In the darkness of their cell, Paul, and Silas – after surviving the server beating – aren’t moaning and groaning; they’re praying and singing hymns to God. The prisoners in the adjoining cells are wide awake, listening to them pray and sing. Suddenly the ground begins to shake, and the prison foundations begin to crack. You hear the sound of jangling chains and the squeak of cell doors opening. Every prisoner realises that his chains have come unfastened.’ (Acts 16:23 -26)

There are two things we can learn from the story of Paul and Silas in Acts chapter 16, as we choose to fight our battles with prayer and praise.

1.  Other prisoners will be set free because of your worship.

When everything is going well in life it’s easy to worship. But when you’re facing a tough challenge, a circumstance that has put you in a painful position, it’s not so easy to raise your hands and worship. The enemy is very good at locking our thoughts in the most secure part of the prison cell within our minds, reminding us that nobody will hear our cries for help. However, when you choose to fight your battle with prayer and praise by lifting your hands heavenward in surrender to the King of all Kings, other prisoners hear you which helps their chains to become unfastened too.

2.  The ones who wounded you are liberated because of your worship.

‘The jailer wakes up and runs into the jail. His heart sinks as he sees the doors have all swung open. He is sure his prisoners have escaped, and he knows this will mean death for him, so he pulls out his sword to commit suicide. At that moment Paul sees what is happening and shouts out at the top of his lungs, “Wait, man! Don’t harm yourself! We’re here! None of us has escaped.” The jailer sends his assistants to get some torches and rushes into the cell of Paul and Silas. He falls to his knees before them, trembling. Then he brings them outside. “Gentlemen, please tell me, what must I do to be liberated?” Paul and Silas: “Just believe – believe in the ultimate King, Jesus, and not only will you be rescued, but your whole household will as well. The jailer brings them to his home…washes their wounds and feeds them, then they baptise the man and his family.’ (Acts 16:27 -33)

This is how powerful worship can be. When we worship, the bitterness we feel from the ones who’ve wounded us has no place when we fight our battles in a posture of praise. Don’t give the enemy any room to win. The jailer and his whole family were liberated because Paul and Silas chose to worship their Liberating King amid their pain and anguish, regardless of the wounds they had suffered. Worship shakes the foundations of prison cells and loosens chains even during the midnight hour when we choose to worship.

Because this is how we fight our battles!

I pray today, that you will lift your hands in worship to Jesus, the Liberating King that will not only set you free but others free too. And as we lift our battle-scarred hands in worship, to You, Jesus, people will see that regardless of our circumstances we will choose to fight our battles in worship and praise to You. Amen.

Don’t miss next week’s post when I share about another weapon you can use to fight off the enemy. Learn all about it in, This Is How I Fight My Battles – Part 2!