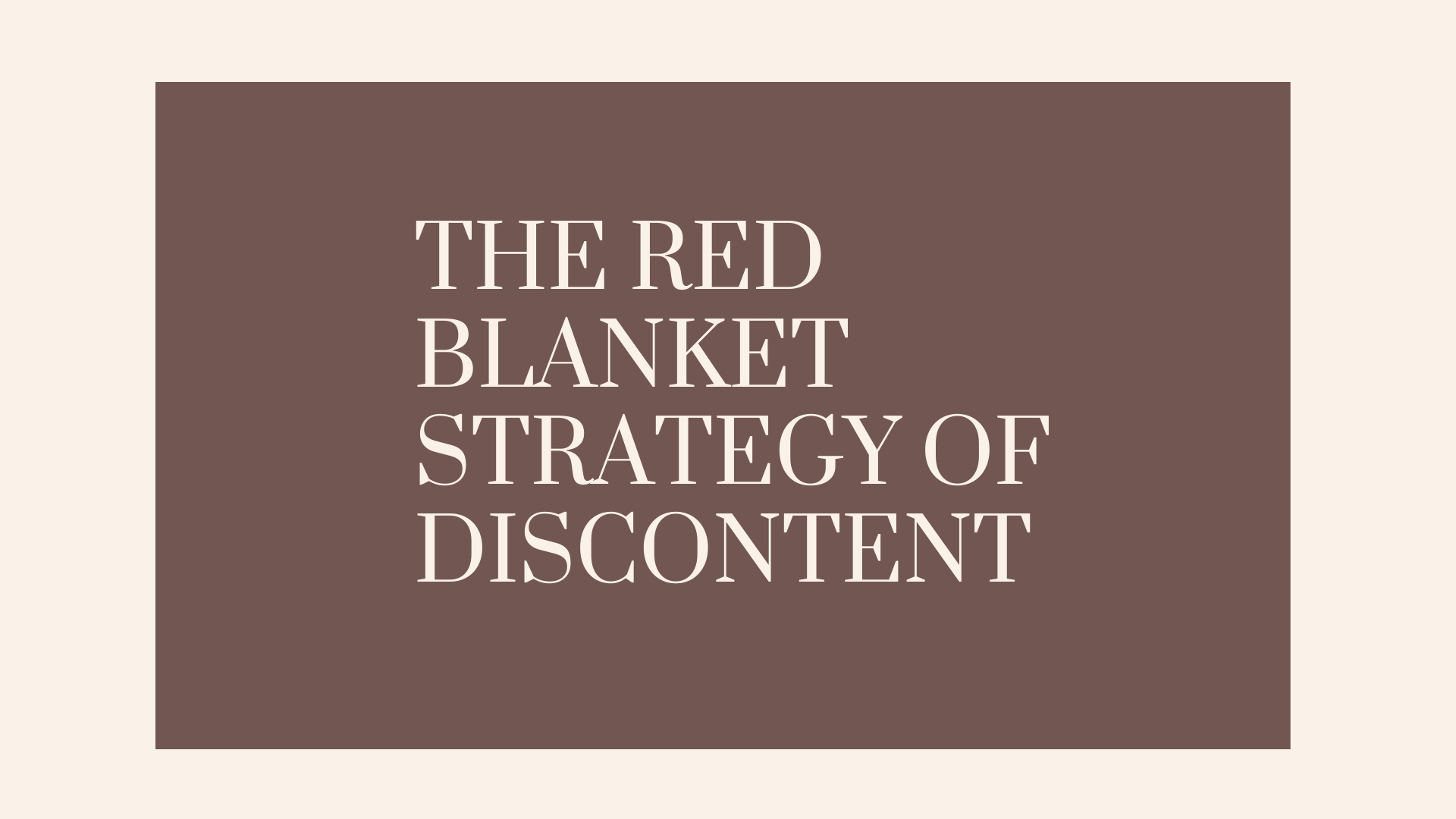 The Red Blanket Strategy Of Discontent.

Did you know that a matador uses a red blanket called a muleta to distract a bull in the final stages of the fight? This distraction of a red blanket hanging from a stick is only used as a diversion to cover up and obscure the bullfighter’s sword. Like the bull, we as believers can become so entangled and fixated on the red blanket strategy that our enemy waves in front of our faces that it causes us to become frustrated, discontent, and dissatisfied with where we’re at in life. The point of the red blanket strategy of discontent is to get us to lose our focus on the real weapon the enemy is concealing that can lead, if we’re not careful, to our demise.

The muleta is designed to lure the bull into a trap which forces him to drop his head and charge at the matador. This is so the matador’s sword can be thrust right between the bull’s shoulders. The mistake the bull makes is that he concentrates too much on the red muleta which allows the bull’s focus to stay on the frustration and discontentment he feels toward the red blanket instead of focusing on the concealed weapon that the matador hides underneath the blanket which will ultimately lead to bull’s demise.

This is especially true when you’re taking faith steps toward the dream God placed in your heart. Satan loves nothing more than to create a feeling of discontentment that causes distraction and a loss of focus so he can use his concealed weapon he hides underneath the red blanket which is his strategy that has been carefully designed to take us out.

“The Enemy allows this disappointment to occur on the threshold of every human endeavour” reminds C.S. Lewis, and “the transition from dreaming aspiration to laborious doing” is when the enemy will up his game plan in the undoing of your dream and use his red blanket strategy to conceal his weapon of choice as you reach the final stages toward your purpose and calling.

Believe me, dreamer, all your purposeful steps have got Satan rattled, because remember; the red muleta is only used by the matador in the final stages of the fight. Satan knows you’re on the cusp of a breakthrough because you’re not just dreaming about your purpose and calling. Oh no, you’re taking laborious, difficult steps toward that dream God put in your heart and you’re doing something about it.

Satan has had to step up his game plan with you, otherwise, you’ll be telling everyone how good God is and how you’ve learned to disable all of Satan’s other tactics and strategies. Now the enemy is desperately trying to bring in discontentment and distrust, so you give up and abandon what God has called you to do.

Like the Israelites in the book of Exodus, you’ve left Egypt behind and you’re not looking back. You’ve seen too many miracles to give up on your dream now. However, you weren’t planning on feeling so struck in this wilderness. You didn’t see the desert coming and now you’re lost. Surely you were meant to be further along your journey by now? And it’s right there in that moment that the coldness you feel from the shadow of the enemy’s red muleta which has blanketed the light that once illuminated your every step is felt the most. The feeling of discontent creeps over you and doubt and fear set in. The red blanket strategy has caused you to feel discontentment and frustration, making you lose your focus on the concealed weapon the enemy hides.

The word ‘matador’ means ‘killer’ and the enemy is in the business of stealing, killing, and destroying your purpose and calling (John 10:10). Know this dear discontented bull, that you’ve set yourself up with actions that have caused Satan to change up his tactics. He has quietly observed your endless searching through your social media accounts. Scrolling…scrolling…scrolling…comparing…comparing… comparing, and he’s realised that a little discontentment and a good sprinkle of frustration is what’s needed to conceal his weapon that has been formed against you underneath his red blanket to make you lose your focus because of distraction and discontentment.

So, how do you fight back when the enemy brings out his red blanket and starts waving it around, so it disorientates, distracts and causes discontent within you? What’s the secret and the weapons you can use to realise the red blanket of the enemy is designed as a distraction that conceals the real weapon which he has formed against you?

Well, the Apostle Paul has a lot to say about contentment and how to enjoy life regardless of the circumstances we may find ourselves in on the way toward fulfilling our purpose and calling.

We can learn two secrets and arm ourselves with some weaponry the Apostle Paul gives to us that will help us keep focused and purposeful in our steps.

1.         The Red Blanket Strategy is Used by the Enemy to Distract Your Focus on God.

Philippians 4:6-7 Paul says, ‘Don’t fret or worry. Instead of worrying, pray. Let petitions and praises shape your worries into prayers, letting God know your concerns. Before you know it, a sense of God’s wholeness, everything coming together for good, will come and settle you down. It’s wonderful what happens when Christ displaces worry at the centre of your life.’

If you make prayer and praise your focal point, then the enemy will have no room to wave around his red blanket to distract you. Your attention will become so absorbed in thanking God that it will settle you down and displace the worry and doubts that tell you that “you’re not enough” or, “you should be there by now and not here in the wilderness”. Take my advice, stop worrying and start praying!

Philippians 4:11-13 Paul shares the secret to contentment. ‘I’ve learned by now to be quite content whatever my circumstances. I’m just as happy with little as with much, with much as with little. I’ve found the recipe for being happy whether full or hungry, hands full or hands empty. Whatever I have, wherever I am, I can make it through anything in the One who makes me who I am.’

If we look at the word contentment and break it down to ‘con – tent – ment’, we’ll discover why the enemy uses his red blanket strategy to distract us from our purpose and call with discontent. When we recognise the ‘con’ which has been designed by a con artist and learn to rest and settle in the ‘tent’ of contentment, then we won’t be questioning the ‘ment’ by asking ourselves, “Is this meant for me?” or “Is this meant to be?” Being content in whatever circumstance we find ourselves in helps us to focus on the next step and take that step with boldness and courage!

Be encouraged if the enemy is attempting to distract your purpose and calling with his red blanket strategy, it means you’re going in the right direction! As I said before, the matador only uses the red muleta in the final stages of the fight. The enemy knows his strategies in getting you to quit haven’t succeeded up until now because you’re understanding your purpose and calling. You’re in the final stages of the fight.

Satan has realised that you’re serious about pursuing the purpose and calling on your life, otherwise, he’d leave you alone and find some other bull to taunt. Typically, in a bullfight, there is no way a bull can win a fight with a matador, but as believers, we know that we fight from the victory Jesus already won for us. Take my advice dear purpose-driven bull, don’t charge at the enemy – take charge and focus on God for the purpose and calling on your life and you will win the fight!

Have you found that the more you keep stepping toward your purpose and calling, the more the enemy uses his red blanket strategy to distract you with feelings of discontentment, worry, and doubt in God’s promises over your life?

I pray that today, you will pray fiercely and praise extravagantly to counteract the strategies of the enemy and learn, like the Apostle Paul, to be content in every circumstance you find yourself in. I pray that you will keep fixing your eyes on Jesus and continue to walk in the purpose, calling, and promises He has for you. I pray that the Holy Spirit will uncover the weapon of the enemy from under the red blanket and know that although it has been formed, it will not prosper!  Amen.