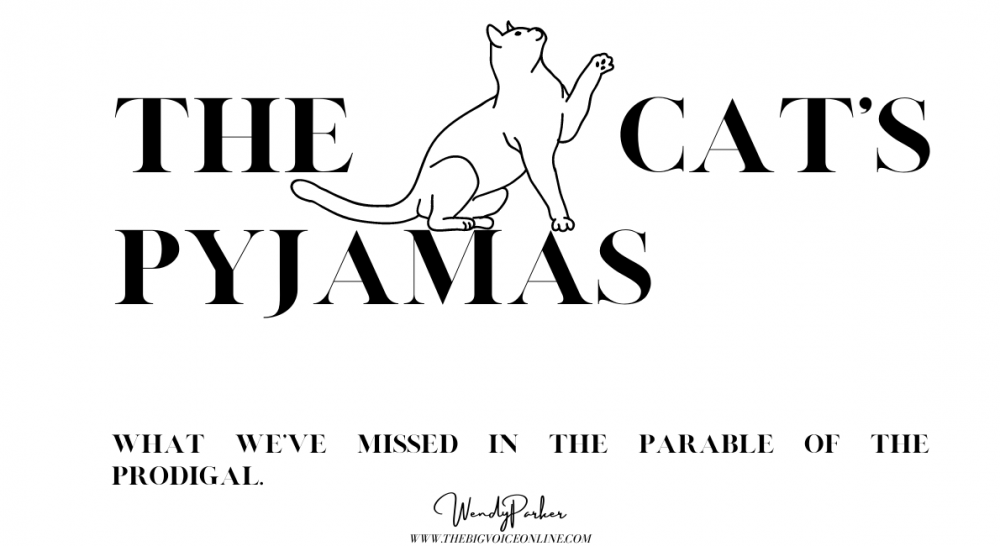 The Cat’s Pyjamas: What We’ve Missed In The Parable Of The Prodigal.

Alright, let’s get down to brass tacks, shall we? We’ve missed something in the parable of the prodigal. Please explain, Wendy. Well, although this story is about the son who was lost and then was found again, I think Jesus revealed something about cats and their pyjamas. Say what? Walk with me for a second…

To discover what we’ve missed, we need to zero in on the older son. Yes, that’s right, the son who got angry because of his brother’s return, the son who was seething because a huge party was happening when he was still out working in the fields, the son who watched his father and all the household gush over his returned brother, who, for no good reason the older brother could think of, was treated like the cat’s pyjamas.

‘Now the man’s older son was still out in the fields working. He came home at the end of the day and heard music and dancing. He called one of the servants and asked what was going on. The servant said, “Your brother has returned, and your father has butchered the fattest calf to celebrate his safe return.”

The older brother got really angry and refused to come inside, so his father came out and pleaded with him to join the celebration. But he argued back, “Listen, all these years I’ve worked hard for you. I’ve never disobeyed one of your orders. But how many times have you even given me a little goat to roast for a party with my friends? Not once! This is not fair! So, this son of yours comes, this wasteful delinquent who has spent your hard-earned wealth on loose women, and what do you do? You butcher the fattest calf from our herd!”

The father replied, “My son, you are always with me, and all I have is yours. Isn’t it right to join in the celebration and be happy? This is your brother we’re talking about. He was dead and is alive again; he was lost and is found again!”Luke 15:28-32 (The Voice)

I think we can all agree that at some point in our spiritual walk we have felt like the older brother in this parable. You know that icky feeling you get when you’re ‘still out in the fields working’ and that wasteful, lying, cheating, delinquent who you used to call “brother” has returned, now with his own church, and with a gazillion followers on Instagram, and a posse of willing servants who treat him like the cat’s pyjamas?

And just like that, you find yourself struggling with thoughts of wanting to punch that brother square in the jaw as he stands there telling you how wonderful his life is right now. But I digress…

Seriously though, we know the older brother struggled with unforgiveness in this story. We get that. Nevertheless, we’ve missed something else that was hidden in plain sight in the parable. I mean, why would Jesus leave this story open-ended? Why not say that the older son came to his senses, shook his brother by the hand, and was completely happy he was being treated like the cat’s pyjamas? Why? Because I reckon Jesus used the older brother character to show how a religious mindset reacts when they want to be treated like the cat’s pyjamas.

You see, Jesus was telling this parable to the Pharisees. If you don’t know what a Pharisee is, they were the cat’s pyjamas of first-century churchgoers. This elite group whom the community idolized, believed that their Christian life was far better than anyone else’s when it came to practising the law of Moses.

However, they had one flaw. Judging, jibing and generally being jackasses to Jesus was what the Pharisees excelled at. But Jesus had these broad of viper’s number. He knew that he was a massive threat to the Pharisees because He was stealing their thunder. And when you’re seen as a threat to someone’s power and position, they’re gonna make darn sure that you’re the one who’ll get crucified.

When we start on the path of the gradual decline toward arrogance because we want to be seen as the cat’s pyjamas in church circles, we stop using the force for the Jedi side and morph into a character that resembles someone from the Death Star. We need to be very careful in throwing our spiritual weight around when we are in the grip of resentment from anyone whose star dares to shine brighter than our own.

That’s the dying to self that Jesus speaks about.

As Proverbs 16:18 states, pride does come before a fall and the only One who should be highly admired, loved and respected is Jesus.

So today, keep your eyes squarely on Jesus because He IS the top dog, the cat’s pyjamas, and all-around good guy. C’mon! He has the scars on His hands and feet to prove it!

Have you struggled with unforgiveness? Perhaps the feeling of wanting to be treated like the cat’s pyjamas has slowly crept into your spiritual walk without you even realising it? I pray today that Jesus brings a fresh revelation of how much you are loved, seen and valued by the Father.