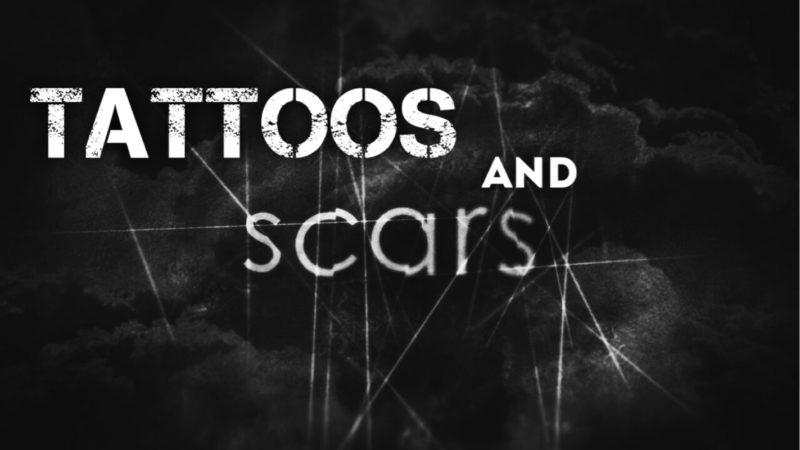 Tattoos And Scars…..Love them or hate them ?

Tattoos. Love them or hate them they are here to stay.

I haven’t got one and probably never will. I grew up in a family where even getting your ears pierced was considered taboo.

But I do find it fascinating listening to the stories people share as to what each tattoo means and why they decided to have one, or two, or three.

Hey, if it’s on your ‘bucket list’ before you die then why not?

It makes me smile when I think of our generation getting older. All those tattooed arms going up and down as they click their needles together, knitting blanket squares for their local charity in the nursing home.

Scars are like tattoos they each have their story to tell.

Like the time I decided to ride my big sister’s bike when I was young and I went too fast and fell off. My forehead and right knee felt every inch of that freshly gritted road as I skidded along it.

Yup. Got the scars to prove it.

I show my kids those scars because I’m proud of them and I like to tell them that story because it shows how much of a dare devil I was when I was a girl.

But some scars we have from our past we are not so proud of.

Your scars are not hidden from God. He has a special ultra – violet light that shows up every scar that you’ve tried to hide.

Did you know He has a tattoo of you?

Did you hear that?

Inscribed on the palms of God’s hands.

THROUGH HIS BRUISES WE ARE HEALED.

Jesus was beaten and tortured before He took the long agonising walk to the cross. He died for you because that was God’s plan. And it’s through His bruises that we are healed.(Isaiah 53)

Two large nails through the hands that have your name inscribed on them.

Two scars left by the nails to tell you that you were worth it.

Tattoos and scars tell us stories about who we are.

So don’t keep them hidden because that’s where the light shines through.