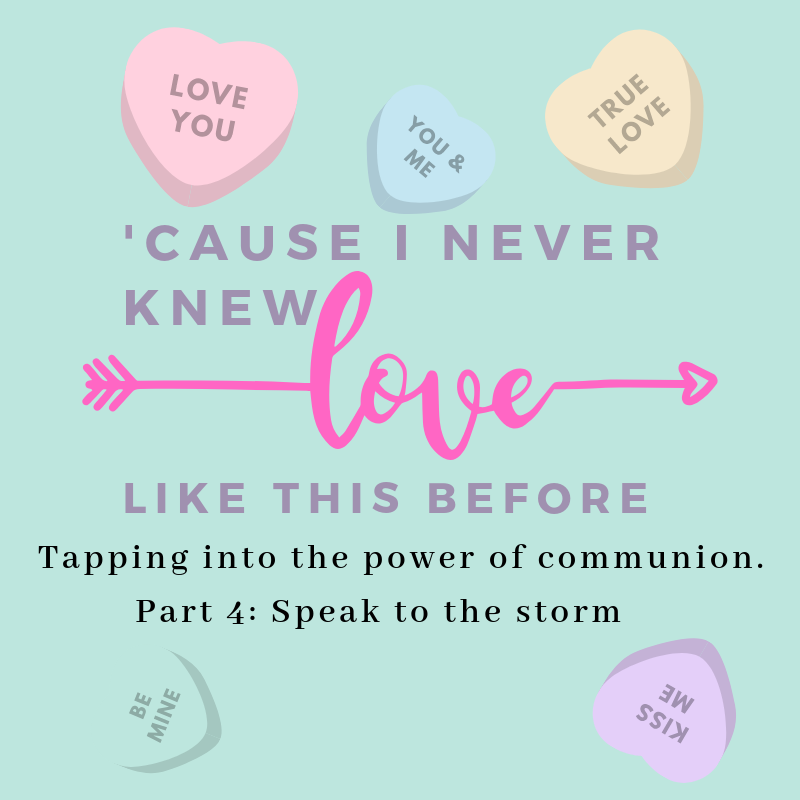 Speak To The Storm

Have you ever been in a storm? I’m married to an ex-sailor who knows all about storms. As he spins his tales of perilous voyages across the oceans and tells us how monster waves and howling winds crashed and bashed Her Majesty’s Ship around upon the waters of the world, finally making it on dry land for a well-earned glass of lemonade at the local watering hole, I wondered if he ever got scared. I ask him if anyone panicked during the storms. “No,” was his short answer. “Why’s that?” I ask. “Because we were trained to deal with storms.”

SPEAK TO THE STORM.

I wonder if that’s why Jesus said to His disciples as they took the bread and the wine, “Do this in remembrance of Me?” It was Jesus’ way of saying that they mustn’t panic when storms come because the God who created the wind and the waves was going to train them how to deal with storms.

Jesus knew that after His death, the disciples would have to face their own storms without Him. They would need regular reminders of Jesus and how He commanded things to obey His Lordship, as they navigated the opposition that lay in wait within their futures.

So, how do you speak to your storm? Do you shy away from it, fearful and intimidated by the sheer size of the thing? Or do you fight and face that sucker like a true warrior?

This is where taking communion is powerful. Communion reaffirms our identity in Christ. A visual sermon to ourselves that we are God’s children, and no storm, no matter how powerful and strong it may seem can take us out.

Mark 4:39 reminds us, ‘Jesus stood up and gave a command to the wind and the water, He said,“Quiet! Be still!” Then the wind stopped and the lake became calm.’ Here Jesus is giving us a heads up of what to do in our storms.

2. He gave a command

3. He spoke to the storm

If you’re a warrior and stand up to your storms, taking back command over the enemy’s plans, I applaud you. You are a kindred spirit, who understands the power of communion. But, if you’re afraid another huge wave will finally take out your little boat. If you’re tired of bailing out water from the holes that are in your leaky boat and you’re tempted to jump overboard into the inky blackness of a peaceful slumber, I have good news, my friend.

Communion helps you to STAND UP and COMMAND that storm to be QUIET and be STILL. No scheme from the enemy can stop the full force of communion power.

Like I’ve mentioned before, communion isn’t a “rub the lamp and the genie appears” hyped up magic potion that makes every storm disappear. All I know is this; Jesus stood up to the storm and gave a command for the storm to be quiet. And as I’ve been banging on about the power of communion for the past four weeks, isn’t it time you trusted Jesus at His Word and “taste and see” that the Lord is good? Jesus tells us to “Do this” in remembrance of Me. Don’t let all that Jesus died for go to waste!

GO AND SPEAK TO THE STORM!