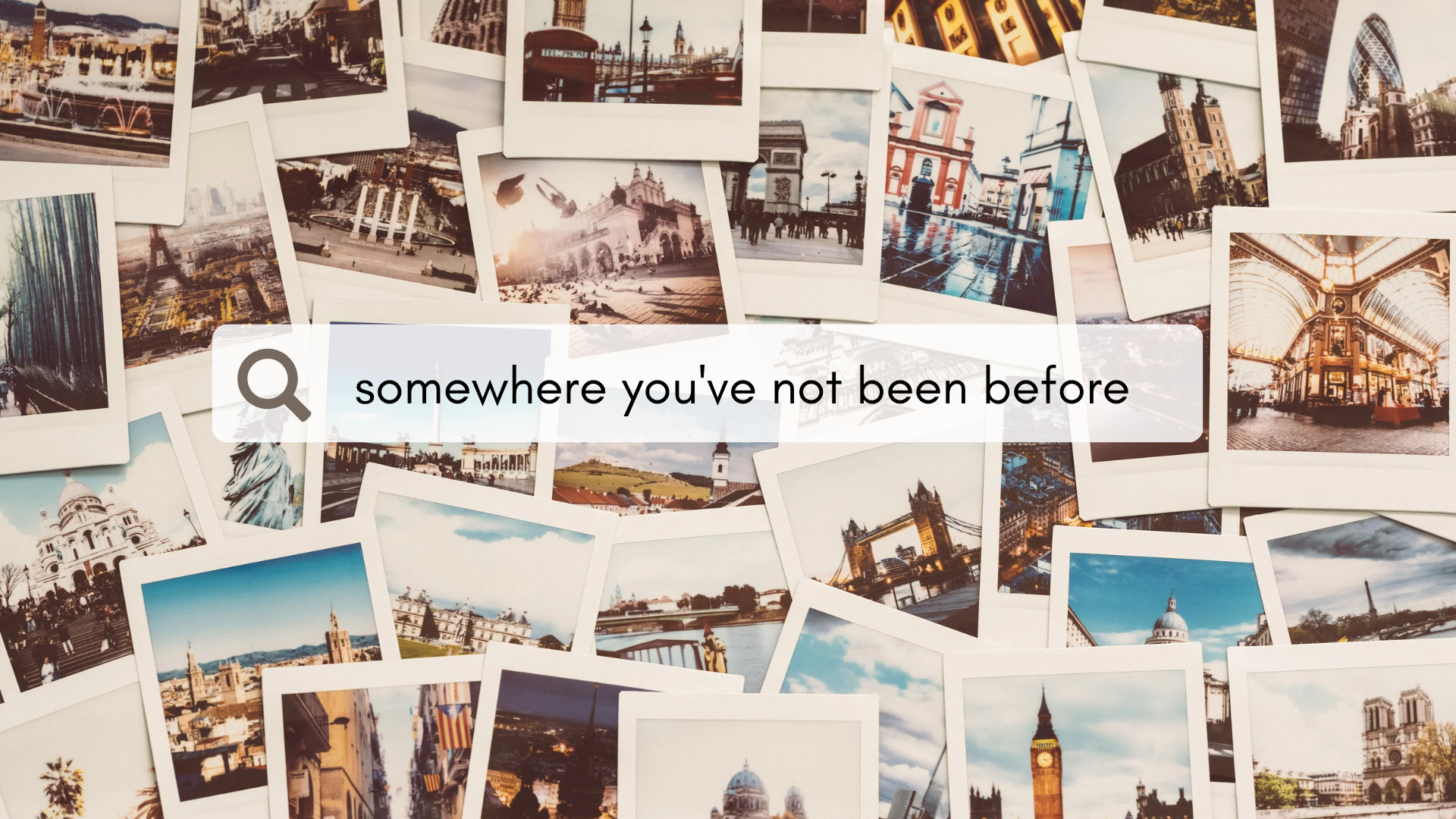 Somewhere You’ve Not Been Before

Perhaps this year you’ve decided that you’re going to diligently stick to the known path you’ve always been on because that’s where you feel safest. Your reasoning is that you’ve realised that dream, that call, that purpose you constantly think about has only led you down dead ends and diversions and there is no point living in hope anymore that it will ever happen. No, this year you’re not to go filling your head with crazy notions, you’re just going to follow the familiar path, the one that feels safest because you don’t want to find yourself somewhere you’ve not been before.

Sounds good, but the thing is, God does not want us to live that way, else we’ll never shift the deep-seated fear constantly niggling at our thoughts, telling each one of us that the unfamiliar territory means that we’ve taken a wrong turn or somehow lost the path because there has been way too many bends and contours, inclines and loops, curves, and steep climbs, so the path we’re on couldn’t possibly be the safe passage God promises. However, what if God was the instigator of your uncomfortable moments along the path? What if He was the One urging you to follow the bends and contours because He knows it is leading toward somewhere you’ve not been before so you’ll discover something incredible? What then?

This weekend, I have been on many paths. Just 24 hours ago, at the time of writing this blog post, I was in Tasmania with my husband celebrating our 28th wedding anniversary. (Yeah, someone asked us how we managed 28 years of marriage and we said we were still wondering ourselves!) *jokes* (Sorry, I’m still in a jolly holiday mood) Anyway, we’ve never been to Australia’s most southern state before and we wanted to experience some of Tassie’s beautiful, scenic walks. So, we headed toward a couple of National parks to enjoy somewhere we’d not been before.

I quickly discovered that the nearer we were to the safety of the visitor’s centre in the National park, the paths were sealed and well maintained and more importantly, a phone signal could be found, just in case you needed rescuing. These paths led us toward some beautiful waters falls close by. However, we found that the further away we were from the visitor’s centre in each National park we explored, the more the paths became steep and slowly turned into large stones that we had to walk along, eventually leading us along a narrow dirt track with rocks and tree roots running along it with warning signs that told us of the possible dangers if we chose to proceed along the route. And it got worse… no phone signal if something happened!

The many steps and steep inclines along the paths we walked caused a few fellow travellers to turn back to the safety of the visitor’s centre where there was a café and well-maintained restrooms. But for the more adventurous souls, (and the ones who had been smart and packed lunch) we were rewarded with fantastic views and a quietness and stillness that refreshed our inner being because we were away from the hustle and bustle of life.

However, as adventurous as I was on my holiday, generally in my day-to-day life I seem to allow fear and anxiety to storm in and override my desire to take big, courageous, bold steps toward somewhere I have not been before, somewhere I have to trust God to take the lead, somewhere I need to let go of my control and fear. Apprehension and mistrust perpetually challenge me to stay close to the safety of the ‘visitor’s centre’ in my mind, where it’s safe, comfortable and the path is smooth rather than venture out into the natural, native parts of the unknown path that God calls me toward and urges me to trust Him because He’ll lead me somewhere where the air is cleaner and the view allows me to see things from a different angle.

Ever felt like that? We hesitate in moving forward in our calling because we believe the lies that the enemy tells us. We believe that heading into unknown terrain could be very bad for our well-being so it’s best that we stay in the comfort of the visitor’s centre, just in case. Our enemy reminds us of all the other times we have ventured into the unknown and become brave, only to hear him hiss, “well, you’ve tried before at this point along the path and look where you ended up, right?” So, we stop in our bold venture toward the somewhere God has for us because it’s too scary. And before we know it, we give up and head back toward the comfort of the visitor’s centre where everyone else is sipping lattes in the safety of familiar surroundings.

But deep down on the inside doesn’t a part of you want to experience somewhere you’ve not been before? The thing is, God never promised our Christian walk would be an easy, safe, and secure passage. Jesus states this in John 16:33 as He said, ‘in this world, we will have trouble’ and so we shouldn’t be so surprised when God leads us to somewhere we have not been and the path gets harder and more challenging as we move along it.

I need to confess that I prayed before our mini trip away for God to show me something that solidified the calling He had for my life. To give me a sign, something that revealed to me that I was heading in the right direction. And amazingly, even though I’d doubted Him, even though I had been difficult, and stubborn and not trusting Him completely through the months and years of discovering what He had called me to do, He led me to a real, little cabin in between the forest trees near a track called ‘Hunter’s Track.’

And at that moment it was like I had stepped into the pages of my book, Wounded and on the Run. (I probably would have fainted if an elk had walked by…however, I don’t believe elks live in Tasmania!) But the point is that we had walked many kilometres along the path wondering where it was going to eventually take us before we finally came out into the opening that revealed the little cabin that felt like the one I had written about in my book.

You see, God was reminding me that although my life’s path toward my calling has had many dead ends, many rocky moments, and a lot of twists and turns, I was right where He needed me to be. I was right in the ‘somewhere’ I had not been before because I kept choosing to go through the difficult terrain. And seeing that cabin in between the trees helped settle all my fears, worries and doubts. It quietened all my questions as God reminded me yet again to trust Him completely with every step along my path even though at times it felt scary and I thought I was lost.

What about you dear friend? Like me, do you have to be dragged kicking and screaming because your stubbornness in not trusting God stops you from stepping somewhere you’ve not been before? Psalm 32:8-9 says, ‘I hear the Lord saying, “I will stay close to you, instructing and guiding you along the pathway for your life. I will advise you along the way and lead you forth with my eyes as your guide. So don’t make it difficult; don’t be stubborn when I take you where you’ve not been before. Don’t make me tug and pull you along. Just come with me!”’

The trouble with us humans is that we want to control everything. We want to do all the instructing and be involved in all the guidance along the pathway of our lives instead of letting God instruct and lead, even though He promises that He’ll stay close to us and it will be His eyes that will be our guide. Nevertheless, we make it difficult, we become stubborn so God has to tug us and pull us along the path, instead of surrendering and allowing Him to lead us to somewhere we’ve not been before. That’s what trust is. Actually, that’s what faith is.

Aren’t you glad God is ever patient, ever kind, ever-present? He guides us along the path, never chastising us for struggling to submit or scolding us when we fumble because we’re not trusting, or not surrendering. He just gently but firmly asks you not to make it difficult, not to be so stubborn when He takes you somewhere where you’ve not been before. He doesn’t want to tug and pull you along like a reluctant child, He’s asking you to just come with Him.

So, maybe it’s time to strap on your backpack and fill up that water bottle and get ready for an adventure with God. An adventure where you’ll need to trust Him entirely in where He leads you and take you to somewhere you’ve not been before. Trust me, the views are magnificent!

If you want to trust God more as He takes you somewhere you’ve not been before, perhaps you could write this scripture down and put it somewhere as a reminder to keep you moving along the path.

‘I hear the Lord saying, “I will stay close to you, instructing and guiding you along the pathway for your life. I will advise you along the way and lead you forth with my eyes as your guide. So don’t make it difficult; don’t be stubborn when I take you where you’ve not been before. Don’t make me tug and pull you along. Just come with me!”’ Psalm 32:8-9