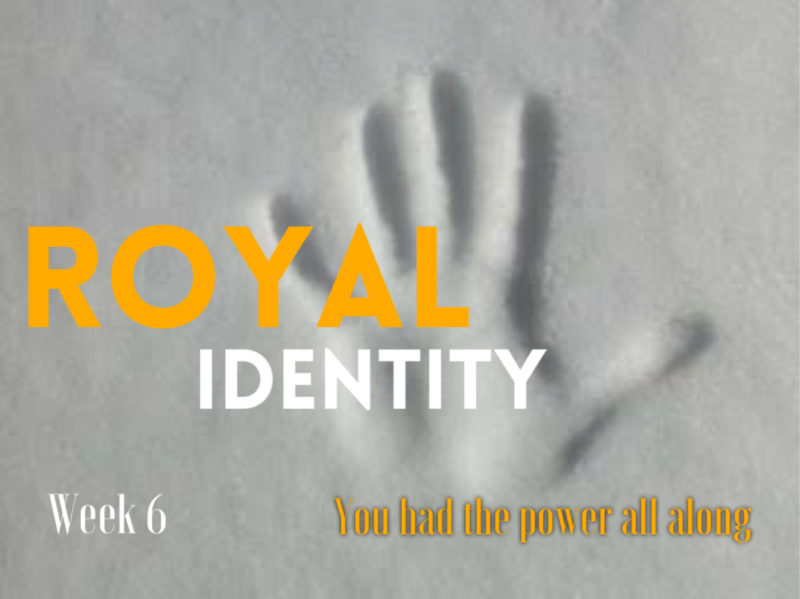 Royal Identity Week 6 – You had the power all along.

Remember in The Wizard Of Oz when the good witch, Glinda tells Dorothy that she had the power to get home all along?

All she had to do was tap together the Ruby Slipper heals 3 times and say, “There’s no place like home…”

That little piece of info would have been great in Munchkinland.

“Why didn’t you tell me this before?” asks Dorothy to Glinda.

Then we wouldn’t have had to endure the pointless song and dance routine of the Cowardly Lion BEFORE they meet the Wizard and everyone could of gone home.

(Too much time on his paws.)

And the Wicked Witch of the West wouldn’t have had a personal vendetta against Dorothy for dropping a house onto her sister and stealing the magical Ruby Slippers.

The haters are gonna hate, right?

Glinda tells Dorothy that even if she had told her she had the power, she wouldn’t have believed her.

And that’s the problem with us.

That the same power that raised Jesus from the dead, lives in you.

[Tweet “The same power that raised Jesus from the dead lives in you.”]

You mean the same power that Pilate thought he could eliminate by rolling a huge stone over the entrance to the tomb, sealing it and then placing ‘around the clock’ Roman guards to stop the disciples from stealing Jesus’ body???

{Go ahead Pilate, knock yourself out.}

And the same power that made the Pharisees practically barf in their mouths when they suddenly realized that they had crucified the Son of God???

You see my friend; you’ve been wearing those Ruby slippers the whole way down that Yellow Brick Road.

You’ve been walkin the walk.

But you ain’t been talkin the talk.

You need to be saying to yourself that you have that same power flowing through your veins that raised Jesus from the dead.

And that doesn’t mean that you go around like you’re the best thing since sliced bread.

We don’t need any more of that nonsense.

You need to realize that you have an enemy who is desperately trying to make sure you don’t know your true royal identity.

It’s to stop wearing masks and hiding your true self.

To ‘see’ and to ‘hear’ the exciting future God has in planned for you.

It’s having an uncomfortable night’s sleep to make sure you are fully awake and don’t miss any opportunities that God wants you to take.

And finally, realizing that you own those Ruby Slippers your wearing and that you had the power all along!

If you are a child of God

You are a bonafide Prince and Princess!

Now there’s something to sing about.