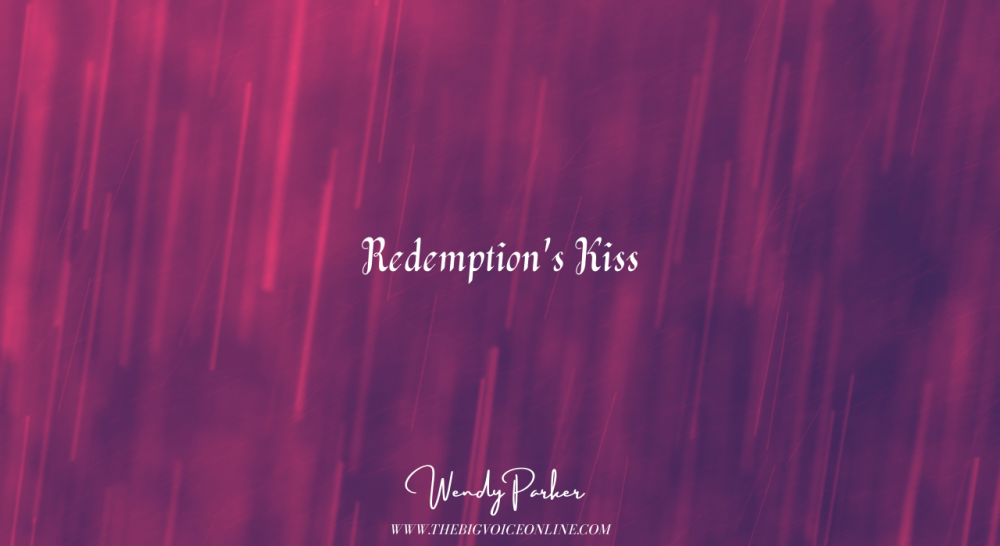 Ever had something happen to you and you just wanted the ground to open up and swallow you whole? In high school, when I had just turned thirteen, I had an incident in my P.E. class that had a devastating effect on my learning and social abilities. Feeling like an outcast every day at school after that moment had left me feeling humiliated and anxious, I found the personal issues I was trying to deal with had become a thousand times worst because of that fateful morning. For many years I have felt too ashamed to tell you my story, too afraid of what you’d think about me. But I want you to hear my story so you can find redemption’s kiss.

Enuresis is a condition that causes bedwetting, and even though my mum tried to help me, the doctor could find nothing physically wrong with me or my bladder function. The medical opinion decided that it was a weak bladder issue, and so that was that. I was five years old when my struggle to stay dry for at least one night a week started to become a problem. My parents agreed with the doctor that I would probably just grow out of it. I didn’t.

Trying to manage the problems that go along with enuresis during my teenaged years meant hardly any sleepovers with my friends, just in case. And now the shame and embarrassment that had kept my condition hidden were about to be exposed right in front of my classmates. On that fateful day in P.E. class, my friend and I were messing around, and she made me laugh so hard and for so long…and well…you can guess what happened next.

Every day I was subjected to cruel bullying and humiliation that left me feeling isolated and alone for the rest of the school year until I changed schools. My fragile self-esteem as a teenager was broken and it wasn’t until I turned nineteen that I finally found a doctor/councillor who helped me through the process, both mentally and physically, of becoming dry at night.

Whenever I read about the woman who had suffered twelve years from a condition that left her unclean and an outcast in Mark chapter 5, I become emotional. I can totally identify with how she felt. Although I suffered from a different condition to this woman, my blood trail of brokenness and suffering needed to find redemption’s kiss.

Here, I’ll let you read her story for yourself.

‘In the crowd pressing around Jesus, there was a woman who had suffered continuous bleeding for 12 years, bleeding that made her ritually unclean and an outcast according to the purity laws. She had suffered greatly; and although she spent all her money on her medical care, she had only gotten worse. She had heard of this Miracle-Man, Jesus, so she snuck up behind Him in the crowd and reached out her hand to touch His cloak.

(To herself) Even if all I touch are His clothes, I know I will be healed. As soon as her fingers brushed His cloak, the bleeding stopped. She could feel that she was whole again. Lots of people were pressed against Jesus at that moment, but He immediately felt her touch; He felt healing power flow out of Him.

He looked around. “Who touched My robe?” His disciples broke the uneasy silence. “Jesus, the crowd is so thick that everyone is touching You. Why do You ask, “Who touched Me?” But Jesus waited. His gaze swept across the crowd to see who had done it. At last, the woman – knowing He was talking about her – pushed forward and dropped to her knees. She was shaking with fear and amazement.

Then she told Him the reason why. Jesus listened to her story. “Daughter, you are well because you dared to believe. Go in peace and stay well.”

The redemption kiss from Jesus not only dried up the blood trail that had left her broke and broken, but it also made her whole again. Jesus could have felt the healing power leave Him and chosen not to mention it. However, He knew this woman needed someone to just stop and listen to her story. Jesus understood that empathy and support rather than shaming and blaming were part of the redemption’s kiss that would heal all the complicated issues surrounding her condition.

Perhaps like me, you can identify with the woman in this story. The devastating effects of feeling the shame and humiliation of a condition that has left a blood trail of brokenness behind you, eroding your self-confidence so badly you lack the words to describe how you’re feeling because anxiety has paralysed your thoughts to the point of silence.

Like the crowd in the story, lots of people are still pressing against Jesus. They are so close to Him, but they do not use their faith to tap into His healing power. But Jesus notices desperate, faith-filled fingers brushing along the hem of His robe.

One touch can dry up the blood trail

One touch can heal your wounded condition

One touch can bring redemption’s kiss

One touch can make you whole

Looking back on that time in my life, the one thing that I remember most about the months of phone calls to that doctor, was that the majority of my healing came because he just listened to my story. All the trauma and humiliation I had experienced over fourteen years had left me so broken and desperate that I pushed through my crowded thoughts and I found my fingers reaching out and brushing the robe of Jesus. His redemption kiss healed me and made me whole.

So, there it is. My story of how I found the power of a redemption’s kiss.

I hope it helps you to be brave enough to reach out and dare to believe that Jesus still heals a broken heart with a redemption’s kiss. Even if you only have enough willpower and strength to touch the hem of His garment, it will change you.

If you suffer from a condition that has left you feeling ashamed and humiliated, I pray that you will reach out in faith and touch the hem of Jesus’ robe. He is ready and will listen to your story by bringing a kiss of redemption that will restore you to wholeness and dry up your blood trail of brokenness.