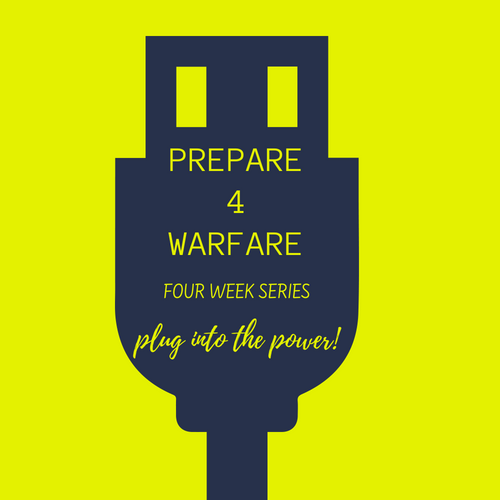 Do you ever wonder why you get beaten up spiritually by the enemy?

Do you feel like you just can’t seem to get ahead in your Christian walk?

And why is it that you are constantly being intimidated by the devil’s devious plans?

Which leave you feeling despondent and depressed?

You are in the middle of a war

Well, don’t you fret, my friend

Prepare 4 Warfare is a four-week series

To take you out of the captivity he’s held you in for far. too. long, my friend

Prepare 4 Warfare is a series

That will equip you

And help you to see how the devil hoodwinks you

So, he can do exactly what he pleases

Which, of course, is what he does very well

The devil’s got you right where he wants you

Which is under his feet and defeated on the battlefield

Once you discover four key ways, in this four-week series

Remember that scripture in 1 Peter 5:8?

“Your enemy the devil is prowling around outside like a roaring lion, just waiting and hoping for the chance to devour someone” (The Voice Translation)

That could put the wind up any good Christian solider, if you’re not careful

Notice it doesn’t say, “Goes around like a lion, who’s just killed and has eaten his prey?”

Nope, the words are, prowling and roaring

Because here’s the trick of the devil

His ‘sleight of hand’ cunning schemes

Make you believe his rampaging will never cease

But, here’s the good news

That’s why he roars – no teeth!

Like a true magician, he’ll carry on ‘wowing’ you with his cheap tricks

Until you think he’s so mighty and powerful

That you’ll live your life in fear and trembling

At the very mention of his name

If you tool yourself up with my four-week series

Quicker than a gun-slinger in a knife fight

So, stop living out your Christian walk in fear

With your fingers crossed behind your back

Just praying that the devil won’t pounce on you

Suit up with your armour

(Which is HIS power and authority)

And show that devious devil that his days are numbered

Because he has absolutely no business

In intimidating and scaring you into a corner

Do you want to learn four ways on how to stop the devil in his tracks?

Then come join me for the next four weeks

On a big adventure

Where you’ll be positioned for warfare

Are ya with me?

(Part one starts next Wednesday.  See you there!!)