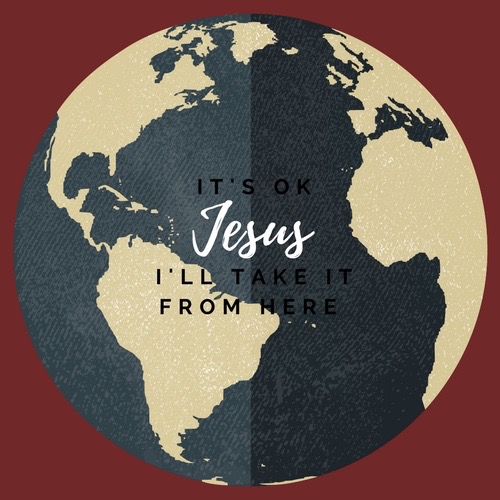 I’ll let you on a little secret

Saviour to the world, isn’t in your job title as a believer

Because when you take on that role

Let me tell you a story…

Driving along our street to reach our house

We saw a lost dog wondering around

After pulling into our driveway and bringing in our shopping bags

A knock came at our front door

It was a woman carrying the lost dog

“I found this dog in the street and I’ve left my car running,”

She said, putting the dog down on my driveway

“That’s not my dog,” I replied

“But my car is over there, and I’ve left it running!” she stated again

Which was code for: “This dog is now your problem”

This was more of a command than a question

Seriously, that was brave for me

Then I said to her

“Because correct me if I’m wrong lady, I didn’t realise that I’d just signed up as the local dog warden!”

When the woman realised I wasn’t going to jump to her command, she said

“Oh, far out!” and legged it back down my driveway, leaving the lost dog behind

Just before I opened my handbag

And produced my superhero cape

My husband closed the front door

(Which of course, I would have)

Now, I know what you’re all thinking

How could you just close the door on the poor dog?

Honestly, if you live in our village for any length of time

And the lost dog usually finds their way home eventually

(Our village is really not that large)

So, who’s responsible for the lost dog?

This question got me thinking…

As believer’s,  do we take on the full responsibility of saving someone?

Like me, do you have to stop yourself from getting out your superhero cape

We are really good at taking on a burden, which isn’t ours to carry

Now, I’m not saying that lost people are like lost dogs

Sheesh, far from it

And, don’t get me wrong, we do have a responsibility to help the lost become found

But when you say to yourself, “It’s OK Jesus, I’ll take it from here”

It’s not good, my friend

Unfortunaly, we don’t have a big enough capacity in our hearts to take on the burden as someone’s Saviour

If the word, “Saviour” creeps into your Christian job title

Then it isn’t from God

Let me just liberate you from that burden right now

We are called to be signposts that point to the only one, true Saviour – JESUS

Because they’ve, “left their car running”

Which is code for: “I’m too busy, you sort this one out”

We are just the signposts, pointing the lost in the right direction

Jesus took on that job when He came down from Heaven

And died on a wooden cross

That qualifies Him for the title, “Saviour”