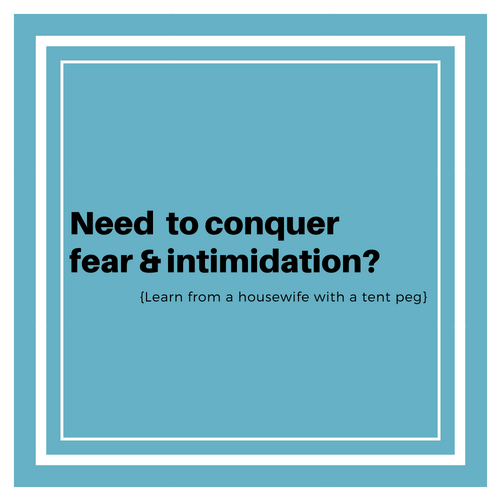 Need to conquer fear & intimidation? Learn from a housewife with a tent peg

Need to conquer fear and intimidation?

All it took was a housewife and a tent peg

The housewife’s name was, Jael

And she conquered fear and intimidation

With one blow that set up her destiny

And sent fear and intimidation packing

LEARN FROM A HOUSEWIFE WITH A TENT PEG

The story of Jael is found in Judges 4, which is in the Old Testament

She was the unlikely hero

Who brought down an enemy of Israel

Proving that God can use anyone, (even housewife’s)

To take down fear and intimidation

You see, Sisera (the bad guy)

But it says that Jael went out to meet Sisera

Next, Jael covered Sisera with a blanket and gave him some milk

He actually asks for “a little water”

But Jael, is way too smart to keep the enemy alert and awake

Sometimes we can cover fear and intimidation with a blanket

And feed it warm milk

Making it comfortable so it stays in our tent

But really, the warm milk and blanket is just to disarm it

Not to keep fear and intimidation in your tent!

Like Jael, we need to get fear and intimidation into a position

So, we can move onto phase 3 of the plan to eradicate it for good

Judges 4:21 says that, “Then she drove the peg into his temple, down into the ground, and killed him.”

If we’re to kill fear and intimidation

So, fear and intimidation are destroyed in our lives

Jael could have thought that too

After all, she was a housewife

Not qualified to take on the challenge

But I believe, that God’s mighty hand was on that tent peg too

When she drove it into Sisera’s temple

God was the secret to Jael’s strength

He can help you too

When we face insurmountable obstacles

We can trust Him to deliver us from fear and intimidation

Which are enemies to our destiny

So, don’t think that God can never use you

Because it’s the unlikely hero’s