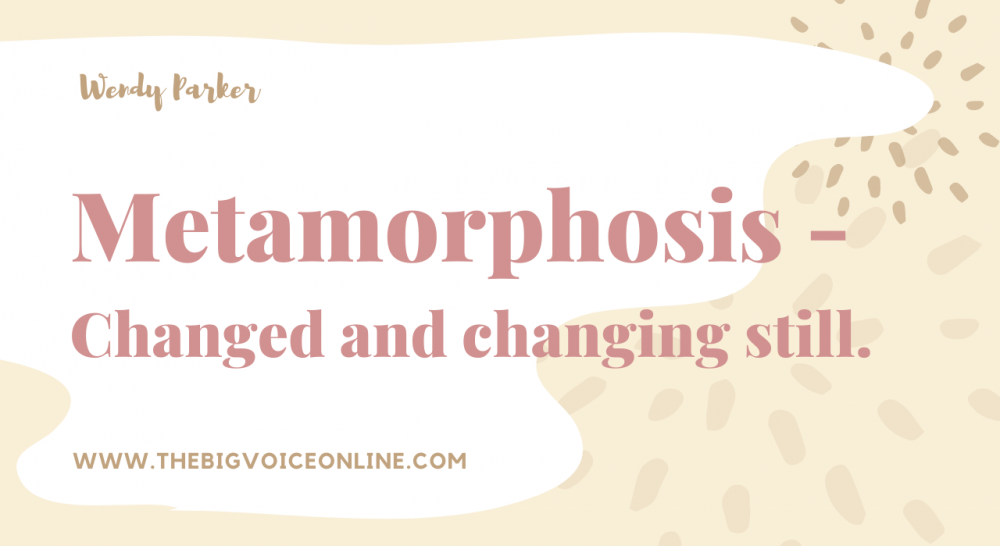 I feel like I am currently undergoing a metamorphosis during this COVID season. I have changed over these past few months and, by the grace of God, I’m changing still. There seems to be a new shift, a switch, an amendment of who I truly am. And I believe that God is doing some serious remodelling within all of us during this pandemic season because He is looking, searching, reaching out for the ones who’ll embrace this change. So, let me ask you, dear friend. Where have you changed this season? In what area of your life have you seen God do the most progress?

In Luke 15, it tells the story of the prodigal son and how he spent his inheritance on extravagant and reckless living. Verse 20 -22 says that, ‘From a long distance away, his father saw him coming, dressed as a beggar, and great compassion swelled up in his heart for his son was returning home. So, the father raced out to meet him. He swept him up in his arms, hugged him dearly, and kissed him over and over with tender love. Then the son said, ‘Father, I was wrong. I have sinned against you. I could never deserve to be called your son. Just let me be—’ The father interrupted and said, ‘Son, you’re home now!’ Turning to his servants, the father said, ‘Quick, bring me the best robe, my very own robe, and I will place it on his shoulders. Bring the ring, the seal of sonship, and I will put it on his finger. And bring out the best shoes you can find for my son.’ [The Voice Translation]

Now, don’t miss this. The passage says that the son was dressed as a beggar. In his isolation he had changed but not for the better because in his rebellion he had lost himself. In his running he no longer saw himself as son but as a beggar. The son’s metamorphosis of full redemption wasn’t complete until his beggar clothes were thrown out and his father placed the best robe, his own robe, upon his shoulders and put the ring that represented the seal of sonship on his finger. Don’t we find ourselves in the shoes of the prodigal? We want the change, the modification, the refinement but this must come at a cost. We have to pay the price of surrender and take off the mindset of the beggar and sit before God so He can change our thinking and clothe us in His redemptive grace.

For me, this season has been a stripping off of who I am not, of who I pretended to be. Fake verses real. A kind of rite of passage within my writing brought about a conversion that had me letting go of my beggar’s clothes and allowed God to put His robe on my shoulders and a ring on my finger. This metamorphosis probably had the angels singing a Hallelujah chorus as God finally had me right where He wanted me, which was on the ropes, too tired to come back swinging at Him with my gloved fists. As Steven Furtick once said, “God cannot bless who you pretend to be” and oh, how true that is! And if I’m brutally honest with you, I had to accept the hard truth that I am not going to be the next C.S. Lewis of the Christian writing world.

The enemy that stunts our metamorphosis from caterpillar to butterfly is comparison. We watch in awe when the other butterflies emerge from their chrysalis, and let their beautiful, iridescent wings dry in the warmth of the sunlight, and we wonder when God. When will it be my turn to see the light? A writer friend sent me an encouraging message about seeing a new season in my writing. The words that soaked in my anguished soul were, “by just being you and allowing Him to flow through you”. Yes! Oh, how my thirsty heart needed to hear those words. My friend was totally right. My writing has changed these past few months because I was just being authentically me. Not C.S. Lewis, not J.K. Rowling, just me. Nothing more, nothing less.

Vulnerability is part of the metamorphosis process when we truly see ourselves as God sees us. God isn’t telling us to wear the straitjacket of religion just so we fit in perfectly with all the other pretending-to-be-cool church people. He wants authentic, real, honest Christ followers who’s defining moment comes through the messiness of this COVID season. God needs to clarify and develop you, and if that takes a complete overhaul of who you think you are, then He’ll get you in the ring ready for the fight of your life. Remember dear caterpillar, for your metamorphosis to be complete there has to be a death before a resurrection. Don’t buy into the ‘fake it ‘till you make it’ slogan, embrace your authentic, true self no matter how messy it gets, and let God change you from the inside out.