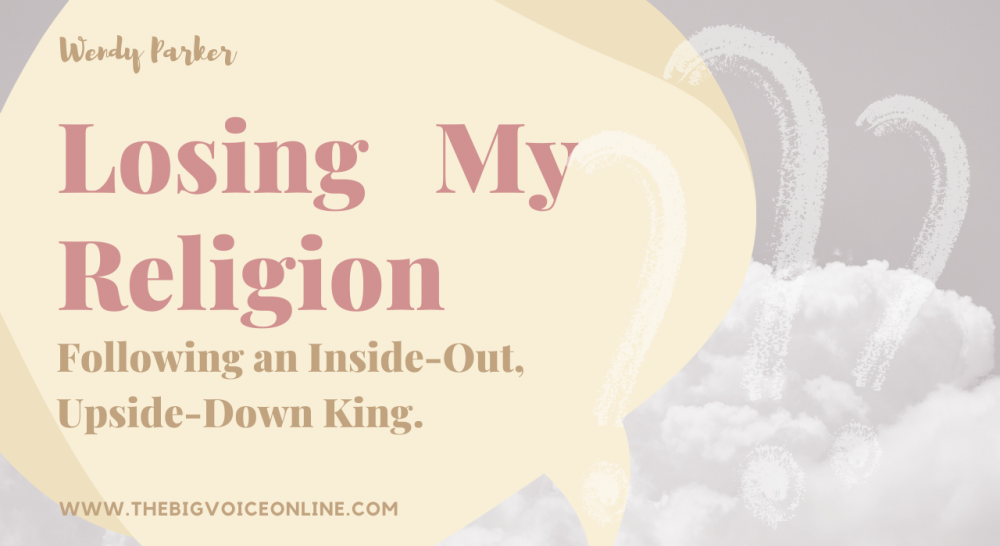 The year of 2020 has certainly given us the old ‘switcheroo’ in terms of going to Church. However, I believe in this season of not attending a building to worship every Sunday has brought a deep connection that somehow, we all missed before. Over the past eight months, I’ve been slowly losing my religion. Yes, the mask-wearing, hand sanitised, one point five metre apart, pre- COVID-19 version of Jesus that I decided to follow has gone. He has now been replaced with an inside-out, upside-down King. A King who has helped me to let go of everything surface-level and superficial that had slowly crept into my faith without me noticing. Like a Black Friday sale, all my religious activity had to go.

You see, I’ve come to realise that religion has no room for authentic, vulnerable faith. It has no time for ugly tears and breakdowns. It just lets you hit the snooze button on the alarm of knowing God intimately, over and over again, so you just go through the motions of a surface level, religious relationship without ever fully waking up.

Matthew chapter 27 verse 35 was a huge wake-up call for all who followed Jesus. ‘And so they had Him crucified…’ The clanging sound of the crucifixion had shaken off every bit of religion from the disciples thinking. The sight of Jesus’ bruised, bloodied, and unrecognizable body hanging from the cross was not what they had anticipated. Their Messiah wasn’t dressed in royal robes, wearing a gold crown and riding on a warhorse ready to take over the Roman Empire as they had presumed. Instead, He’d been spat on, whipped, and humiliated while wearing a scarlet cloak and a crown made of thorns that mocked the very core of His identity and Kingship.

‘The governor’s soldiers took Jesus into the great hall, gathered a great crowd, and stripped Jesus of His clothes, draping Him in a bold scarlet cloak, the kind that soldiers sometimes wore. They gathered some thorny vines, wove them into a crown, and perched that crown upon His head. They stuck a reed in His right hand, and then they knelt before Him, this inside-out, upside-down King. They mocked Him with catcalls. “Hail, the King of the Jews.”

Tough circumstances have rung loudly in our ears over the past eight months and pushed our convictions to take action. It’s time to lose our religion and take back the inheritance, the birthright which Jesus gave His life for. However, God will not force you, He always lets you choose. He never begs and pleads for you to come home. Like the Father standing at the gate, watching and waiting for the prodigal son to wake up to his condition and return home again, God waits for you to take off the beggar’s cloak of religion, the filthy rags of self-righteousness and put on the robe that is the Father’s. (Luke 15:22). Only then will we gain our true birthright.  ‘Although He was a Son, Jesus learned obedience through the things He suffered. And once He was perfected through suffering, He became the way of salvation for all those who hear and follow Him’ (Hebrews 5:8-9 TVT)

The version of Jesus every disciple wanted couldn’t be formed because that clean-shaven- cape-wearing-squeaky-clean Messiah would not have had any power or authority to overthrow Satan’s rule. It was only through the suffering that Jesus endured on the cross that our inheritance of Eternal Salvation would be firmly secured. Religion says, “I’m in charge” but obedience and self-sacrifice to God’s will says “He’s in charge”.

The masquerade, performance-based, insincere religion we were wearing eight months ago has no power to help point people to Jesus. Satan needs you to keep hitting the snooze button on your faith, so it distorts the reality that you do actually have the power of the resurrection Christ running through your veins! Isn’t it good to know that none of our religious activities will get us any closer to God? I take great comfort in knowing that through my daily struggle of dying to self and picking up my cross I can truly lean all of my ‘faith as small as a mustard seed’ into God and let Him take the lead.

And so, they had Him crucified, this inside-out, upside-down King who broke the yoke of religion and crushed the head of legalism. This inside-out, upside-down King, who suffered for our salvation and then rose again to welcome us home into our inheritance and birthright. Something I have learned over the past eight months is this; religion is like Harry Potter’s invisibility cloak. Once you’ve got it draped over your shoulders no one can see you anymore. You are still there under the cloak, but you’re covered. Religion has covered the real you. Jesus needs people to see you. The real deal. No more faking it, my friend. They need to know the authentic, vulnerable faith you have, not the religious covering that keeps you sanitised and hidden.

Let this season bring a deep revelation within your faith so your relationship grows stronger with God. Take my advice; lose the religion because it’s the only way you can follow an authentic, powerful, inside-out, upside-down King.

Where has your faith grown the most in this crazy season?