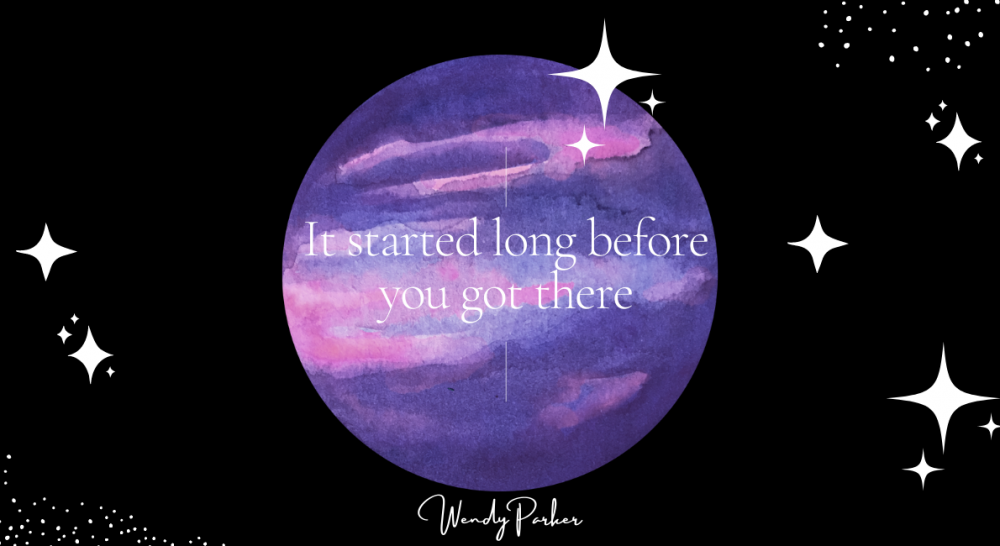 It Started Long Before You Got There.

What if I told you, it started long before you got there? Erm, don’t you mean “here”, Wendy? *Coughs awkwardly*Nope. I mean there. There where you are now, hiding behind those trees, face in the dirt, scared and wondering what to do next because the shame from what you’ve done or what’s been done to you has paralysed you with fear. You can hear His voice calling you, the One you believe you have let down, the One you think will overreact because you’ve run so far from Him.

Chances are you’ve been running for years, maybe even decades. But let’s face it, running and hiding is better when you’re too frightened to reveal your wounds. So, you’ll stay there and rest awhile. You’ll stay there behind the trees until the hunter stops noticing you and goes away. You’ll stay there until you’ve yanked those arrows out that have caused so much pain and you can find enough strength to mop up that blood trail yourself. The blood trail that’s led you deeper into trouble. The scarlet thread that has been following you long before you got there.

Perhaps, like me, you’ve run for decades and then hidden for years, believing wholeheartedly that you can pull out those arrows by yourself and clean up any mess that those wounds have left behind you, thank you very much.

I hate to be the bearer of bad news, my friend, but you cannot outsmart the hunter in your own strength. And let’s be clear, Satan will make damn sure you look like the fool in your foolproof plan rather than him. The hunter, which is Satan, hatched a plan to take you out long before you got there. He schemed and plotted to take you down long before there, behind those trees, behind the dense shrubbery of shame and regret that made you hide your mistakes from God’s view.

Way, way back, the story of running away and hiding started long before you got there. Wounding by the hunter has happened since the Garden of Eden. Genesis 3:9-10 is where God calls out to Adam and asks where he is. Adam replies, ‘… I heard Your voice in the garden, and I was afraid because I was naked, and I hid myself. ’Adam and Eve suddenly became aware of their nakedness after their encounter with the serpent and were scared of God’s reaction, so they hid among the trees.

Listen, dear friend, whether it was something you did or something someone did to you, God isn’t going to overreact. Hiding there behind those trees doesn’t stop God from seeing you. He wants to take a look at your wounds so He can help you. I think we forget that Jesus was wounded long before we felt the sting of rejection, betrayal, or disappointment in our lives.

In Isaiah 53:4-5 (NKJV) it says, ‘Surely, He has borne our griefs and carried our sorrows; yet we esteemed Him stricken, smitten by God, and afflicted. But He was wounded for our transgressions; He was bruised for our iniquities; the chastisement for our peace was upon Him, and by His stripes, we are healed.’

Did you catch that? Jesus endured the breaking so we could become whole, and this was done for us through His suffering and humiliation long before we ever got to ‘there’ wherever ‘there‘ is for you right now.

So, dear friend. Take a deep breath and come out from behind those trees. God wants you here, not there. You cannot take out those arrows and clean up the blood trail in your own strength. Lean on Him and let His strength, His redeeming blood heal every wound and turn them into beautiful scars.

Does the shame and regret of what you’ve done or what’s been done to you keep you hiding? I pray today that you will find the courage to come out from behind those trees and let God heal the wounds that have kept you running there.