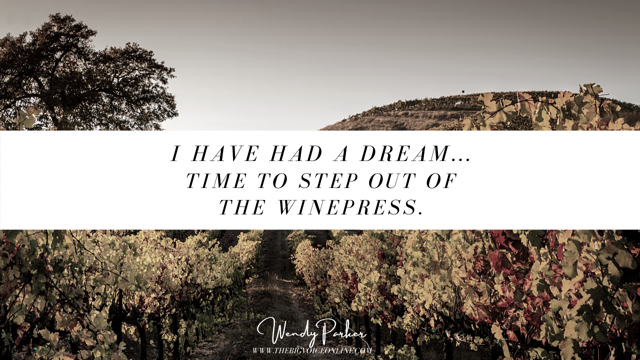 I Have Had A Dream: Time To Step Out Of The Winepress.

It’s no good pretending. I see you. Yes you, acting like you don’t know what I’m talking about because you have stuffed that dream of yours so far down your to-do list you’ve forgotten what it looks like. You believe you’ve screwed up too many times in the past to ever be used by God, and your dream that was so full of promise and bravery and courageousness, and oh so, so much excitement has now had its narrative altered. Other words like; “Oh, that’s too risky”, I don’t believe I could do that”, “that’s so scary”, “what happens if…”, “I can’t find the finances to…”, “I’m so crazy to even think I could…” and “…blah, blah, blah…” have crept into your thinking, and it feels like twenty-two thousand promises have got up, walked away and left you.

Gideon knows just how you feel. His dream of a better life started in a winepress in Judges chapter 6. Border bullies known as the Midianites were robbing Israel of their crops and livestock to the point that the Israelites were living in caves in the mountains to hide from them. And even though the angel of the Lord called Gideon a ‘mighty man of valour!’ and the Midianites were going to be delivered by God into his hand, and God reduced Gideon’s army from thirty-two thousand men down to three hundred to show how much he was on his side, Gideon still wasn’t completely convinced he was the right guy for the job. Until he overheard someone say, “I have had a dream…”

I believe this story about Gideon in Judges is for dreamers. If you read the whole story, there is a theme that runs right through it.

Stepping out in faith

Stepping out in faith

‘And when Gideon had come, there was a man telling a dream to his companion. He said, “I have had a dream: to my surprise, a loaf of barley bread tumbled into the camp of Midian; it came to a tent and struck it so that it fell and overturned, and the tent collapsed.” Then his companion answered and said, “This is nothing else but the sword of Gideon the son of Joash, a man of Israel! Into his hand, God has delivered Midian and the whole camp.”

And so it was, when Gideon heard the telling of the dream and its interpretation, that he worshipped.’

Perhaps Gideon’s mind went back to the winepress where he had been hiding as he listened to the man’s dream. That ache and longing of living a better life as he threshed the wheat to feed his family because the Midianites had robbed them of everything they had planted. The journey of doubt, of feeling like a screwup, of believing he was less than, of seeing God take away his security that was found in thirty-two thousand men were the steps that had led him here at this moment. Listening to the man tell his dream brought courage and boldness on the inside of Gideon, and he was now determined more than ever to take back everything the enemy had stolen because he knew God was going to bring a victory.

Life is safer and far less alarming when we have all our ducks in a row. But that’s not how God wants us to live. God chooses the losers, the screwups and the less than people because His glory shines so much brighter through broken, chipped vessels. He knows your insecurities. He sees you on your best-behaved days and your worse days and He still reminds you that He loves you. He lights the next step when you feel like you’re fumbling in the dark and He shows you that He’s with you when you feel like your dream is getting too hard, too difficult, or too scary and you just want to forget the whole thing.

Over and over again I hear people say, “I have had a dream” but they have chosen to stay in the comfort zone of the winepress. I have seen many get up and walk away from their dream because they were fearful of the battle ahead. I don’t know about you, but I am sick and tired of watching the enemy rob people of everything they’ve sown and planted in their dreams, so they decide to give up.

God never said this dream business was going to be easy. He just said He would be with you.

And that is all you need to know to keep putting one foot in front of the other.

Are you hiding in the winepress too afraid to live out your dreams? How has this blog post helped you see things from a different perspective?