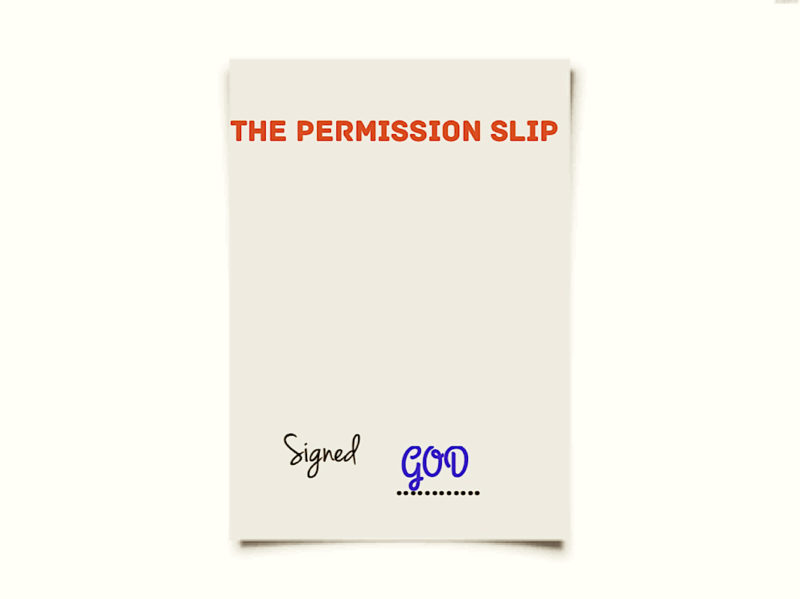 Every so often my daughter will give me a permission slip for me to sign so she is able to participate in some activity at school. Unless I sign the permission slip she franticly waves in front my face ten minutes before the school bus is due to arrive (I might add) she is unable to do the activity.

Her hurriedness does not faze me. I pause to read the permission slip; after all I am not in the habit of signing anything that I have not read. ( Queen Elizabeth the first taught me that)

With a flourish of ink running out the nib of my feather Quill I sign the permission slip.

I tear off the bottom part of the permission slip and give it to my daughter.

“What took you so long?”

Is her reply as she grabs the piece of paper from my hand.

I pondered the question.

“What took you so long?”

After 10 plagues I’m sure the Israelites were asking God the same thing.

God had already signed their permission slip in Exodus 3:7 -8

“I have surely seen the oppression of My people who are in Egypt, and have heard their cry because of their taskmasters, for I know their sorrows. So I have come down to deliver them out of the hand of the Egyptians, and to bring them up from that land to a good and large land, to a land flowing with milk and honey…’

Before they blew the dust off the top of their suitcases and popped down the local currency exchange to pre – order ‘milk n’ honey’ banknotes, they had to get another permission slip.

And he was chillin like a villain until Moses and Aaron showed up at his Palace, both looking like the ‘before’ in a makeover show.

Two smelly shepherds standing before the great Pharaoh with the permission slip for him to sign.

The excitement that had stirred among the Israelite slaves after hearing about Moses and Aaron bravely asking Pharaoh to let God’s people go would have fallen flat when Pharaoh said, “NO!”

The glimmer of hope that their dream could finally come true was snuffed out.

You know God has already signed your permission slip for your dream but there’s a ‘Pharaoh’ standing your way?

Satan only gets nervous about someone’s dream when it has the potential to make his kingdom of darkness go into damage control.

Pharaoh’s are a good sign your heading towards your dream!

Next you’ll be telling me that the 10 plagues Egypt encountered were good!

No, they were not good and some were down right gross.

After the water had turned to blood and the frogs came and went, they had lice, then the flies came right before the Livestock became diseased.

Remember that the Israelites hadn’t had their permission slip signed off yet to leave Egypt so they encountered every one of those ten plagues too!

If you’ve carried a dream in your heart for a long time you know how those Israelites must of felt, right?

Every morning they would drag their half dead bodies out of bed to endure another hot and exhausting day in the Egyptian sun. The Taskmaster cracking his whip at them until their unpaid labour was complete for the day.

Surely they must have been thinking,

“This looks nothing like my dream. The land of milk and honey that I have dreamed about is so far off in the distance I don’t think it will ever come true.”

But I think with every crack of the whip from the Taskmaster. Every plague that they had to endure made their dream,

STRONGER and gave them a better VISION to see it through.

When God gives you a permission slip for your dream He never actually tells you when it will come true.

And that’s a real bummer when every fibre in your being wants it so badly.

You may have to go though ten plagues to get to your dream.

But whatever your dream is know that each plague you get through makes you more determined to reach your goal.

When God places a dream in your heart He never gives you one that you can achieve on your own.

They are called Daydreams.

But if your dream scares the pants off you – then it’s a GOD SIZE DREAM.

Your life or job may look nothing like the dream you carry in your heart.

Because God has already signed your permission slip!