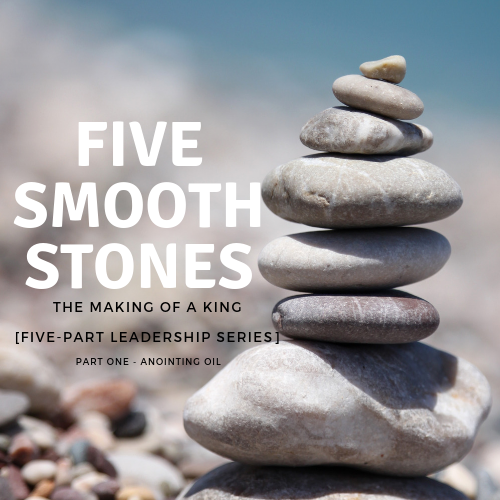 Five smooth stones – The making of a king

Shepherd boy David kills the giant Goliath. It’s a classic story about the underdog saving the day and eventually becoming the king of Israel. Everyone who reads this story is focused on that moment. The moment when one small stone which came from David’s slingshot, hits the massive giant Goliath smack bang in between his eyeballs, knocking him out cold. All it took was one smooth stone to defeat the giant. Or did it?

Why did David pick up five stones instead of just one?

What if the five smooth stones David selected from the brook that day, actually meant something to him? What if each smooth stone David picked up, reminded him that everything he’d been through to get to this moment was God’s way of preparing him?

THE MAKING OF A KING

We find the prophet Samuel confused in 1 Samuel chapter 16, he couldn’t understand why one of Jesse’s seven muscular, warrior sons were not chosen by God to be the next king. “Are all your sons here?” Samuel asks Jesse, thinking this was a wasted journey. “All but the youngest. He is off keeping the sheep,” replies Jesse, suddenly remembering he had an eighth son.

Have you ever felt forgotten and unimportant? Stings, doesn’t it? Your sense of value plummets faster than shares on the stock market. You’re way, way, way out in the field tending to the smelly sheep while your brothers are shaved, showered and lined up in their best suits, as though their waiting to be given a rose by the Bachelorette. A serious case of FOMO, right there!

I believe the first stone David picked up was to remind him that even though he felt forgotten by his family, he was still the anointed one. Right before God anoints you for your purpose, the enemy will send his first Goliath to make you feel forgotten, unwanted and unloved.

THE SMOOTH STONE OF CONFIDENCE

The first giant the devil sends when you’re stepping into leadership, is designed to make you lose your confidence. That Goliath will whisper that you’re not important and everyone has forgotten about you.

Once you’re doubting and second-guessing on whether you are really cut out to be a leader, the devil has taken ground. After Samuel called for the youngest son, God told him that this was the boy he was to pour the anointing oil on. I can just imagine the response of the other brothers, can’t you?

True leaders don’t look like much on the outside. They are unassuming creatures, who like to blend in, rather than stand out. They can lead in any situation they find themselves in because they are confident in their gifting as a leader. True leaders don’t need a corner office or a plaque with their name printed on it to make them feel important. Also, true leaders aren’t much for titles either, they can take them or leave them.

You’ll find the wanna-be leaders need all those things to make them feel the authority of leadership. And if you don’t know who’s leading? Don’t worry, they’ll tell you. If someone has to keep reminding you that they’re the leader, they’re not a leader.

Even if you are smelling of sheep dung and have grass in your hair, just like David, when God says you’re a leader, then regardless of what anybody else says, thinks or does to you, that statement cannot be scrubbed out. You have been anointed by heaven’s oil and have God’s blessing to step into the leadership role He has for you.

So, pick up the smooth stone of confidence and remember you are anointed for leadership. Because when you’re on the battlefield facing your Goliath, you are going to need that confidence.

It’s the first stone that will be the making of a king.

Part Two – Dealing with the lion and the bear

See you then! x