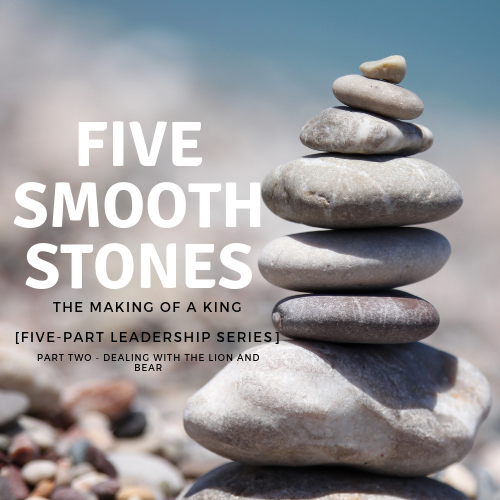 Five part leadership series. Part two – Dealing with the lion and the bear

Well, here we are on week two already, folks! And this week’s smooth stone is all about dealing with the lion and the bear.

DEALING WITH THE LION AND BEAR

David’s second smooth stone taken from the water, was to remind him that he’s dealt with animals like Goliath before. He tells King Saul, in 1 Samuel 34-37 that he has come across wild beasts who wanted to attack one of his lambs before and with God’s help, he could do it again. David clearly sees the parallels between the circumstances. Killing a lion, a bear, a Goliath, it was all the same to David.

Every battle David faced was the Lord’s.

So, what lions and bears have you had to deal with? Where did God help you when they came prowling around looking for “someone to devour?” 1 Peter 5:8

Who has the enemy sent to intimidate you?

Remember friend, real leaders don’t dangle titles over people to make them do what they want. Those fakes and frauds believe that’s what leadership is about.

Each predator is ready to attack your weak spot. Each “lion” or “bear” that is sent by the enemy, is designed to show you just how small you are. If the enemy can intimidate you into submission, then its game over, my friend. God allows the lion and the bear to come before you face your Goliath, to prepare you.

God needs to know that even though the anointing oil is on you and even though you’re not yet in a leadership position, He wants to see if you call on Him for help and not fight in your own strength.

When God prepares true leaders, He does it when the somebodies think you’re a nobody. The somebodies don’t care about the nobodies. They couldn’t give two toots as to whether your sheep get eaten by the lion or clawed to death by the bear in a field they’ve never heard of.

But just like David, you have been given the position and responsibility of keeping those sheep safe before you rise to the position of the leader you were anointed to become.

Wherever God positions you and whether you take that responsibility seriously, determines what leader you are going to be. If you think that looking after a few sheep is below you, then maybe you’re not the leader God is looking for. Sure, you will lead because God has anointed you a leader, but you may not lead as well as you could.

King Saul was an anointed leader, but when he became insecure about David’s rise to stardom, he became so jealous that he wanted to kill David. Saul was a somebody and David was a nobody from the back-end of a sheep pasture.

It’s so sad watching gifted leaders fall into the enemy’s trap of thinking that they will miss out on something just because another leader’s star is rising faster. When a leader’s insecurity has them clinging so tightly to their position, you can be sure fear runs rampant and they start treating people badly.

So, roll that second smooth stone around in your hands as you prepare to take on your Goliath, and remember friend, if God can rescue you from the lion and the bear, He can sure rescue you from that big, bad, mean old giant!